Christian schools in Israel do not receive the same financial support as their Jewish counterparts, burdening parents with higher tuition costs. 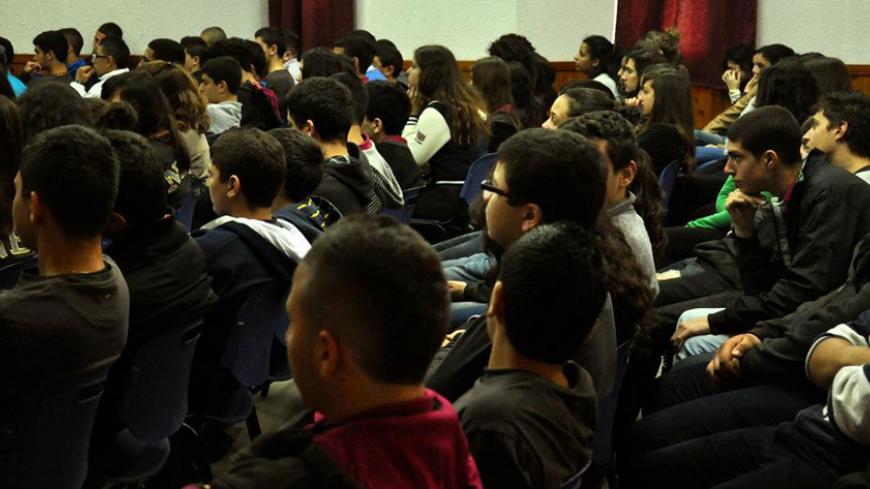 Students graduating from church-run schools in the Holy Land are among the best performing and successful. Some of these educational institutions recently received worldwide visibility with the canonization of two Palestinian nuns whose selfless efforts were instrumental in raising the level of education in what is now Palestine and Israel.

Christian schools in Israel, however, are facing severe financial difficulties, leading to an unprecedented demonstration in Jerusalem on May 27.

While the financial crisis in schools is not new, funding inequalities have recently became more clear. Haaretz reported May 15 that as part of the recent coalition negotiations, United Torah Judaism won financial equality between Heredi (Jewish Orthodox) and state education systems.

As a multiparty parliamentary system, Israeli governments are regularly created as a result of painstaking coalitions in which Cabinet portfolios, policy issues and financial disbursements are carrots used to convince small parties to keep the government in power.

Israel guarantees education for its citizens and has a special clause that gives nonpublic schools support for taking some of the burden from the government for educating its citizens.

Kamal Attieh, spokesman for non-Jewish schools at the Israeli Education Ministry, issued a statement May 26, the eve of the demonstration, stating that Christian schools do get partial government funding, but that if they want to receive full funding they need to become fully registered within the school system. At present, these schools are recognized but not fully registered as members of the Israeli educational system.

Christian school founders say that their schools were created before the creation of the State of Israel and have their own religious specificity. They feel this is an attack on them as an Arab Christian minority in the Holy Land. Most of the Christian schools were established in the 19th and 20th centuries. The Catholic order of Nazareth Nuns was founded in France in 1822. In 1854 a delegation was sent to bring education to the Holy Land. In 1855 the first school was founded in Nazareth and the school in Haifa was established in 1858. The Baptist School in Nazareth was established in 1936.

Israeli law allows schools with a specific religious identity to receive up to 75% of the cost of tuition from the national budget. But according to Botrus Mansour, general director of the Baptist School in Nazareth, these funds have been reduced through technical and accounting maneuvers to no more than 45% of the cost of running his school at its current high-quality level.

Mansour told Al-Monitor that the Israeli government has set a tuition limit on what the schools can collect from students/parents. “The straw that broke the camel’s back was the fact that the government reduced financial support and at the same time refused to allow us to make up the difference through the collection of tuition.”

Christian schools would need to charge an average of 5,000 shekels ($1,290) annually per student while the government has put a cap at 2,500 shekels ($645), according to Mansour. “We understand that what we are asking from parents is high, but we have no other way to pay our teachers’ salaries,” he said. The minimum wage in Israel stands at 4,650 shekels ($1,200), with good teachers earning much more.

Fadi Helou, parent of a student at the Baptist School, said that it is difficult to pay the high tuition fees. "It is hard for most families to afford the higher tuition and the problem is even greater for families with more than one child having to cover these high school costs."

The latest demonstration had been first planned for the eve of the start of the 2014-15 school year in September but was postponed based on promises by the ministry’s director general, Michael Cohen, to rectify the financial inequality. Nothing happened until May 25, the day before the next demonstration, when the head of the department met with representatives of the schools and made still more promises but no concrete agreements, according to Mansour.

One of the demands of the organizers of the demonstration has been equality with Jewish religious schools, whose costs the Israeli government covers entirely. “While the Christian schools adhere to the curriculum from the Ministry of Education and accept the monitoring of the supervision of the ministry, the Jewish religious schools don’t accept either and don’t even agree to teach English to their students.”

Christian schools in Israel are also not willing to be officially recognized as part of the public school system, a category that would give them special status and tuition fees of up to 6,800 shekels ($1,753). Mansour says that his school's tuition is 4,500-6,500 shekels ($1,160- $1,676), lower than what would be allowed if it received this recognition.

He adds that the school has rejected that proposal because it would add to the parents’ burden. “We want the parents to be able to teach their kids in Christian schools that preserve their identity as Christian Arabs, free of charge, just like the Jewish ultra-Orthodox are able to do.”

For the time being, the Christian schools are fighting for a fair share of the budget from their own taxes. However, many worry that if this issue is not resolved internally, some of the schools might seek the help of the Vatican, which could be seen as unpatriotic.