The expansion of the Islamic State has forced regional powers to cooperate and is in fact strengthening state governance in the Middle East. 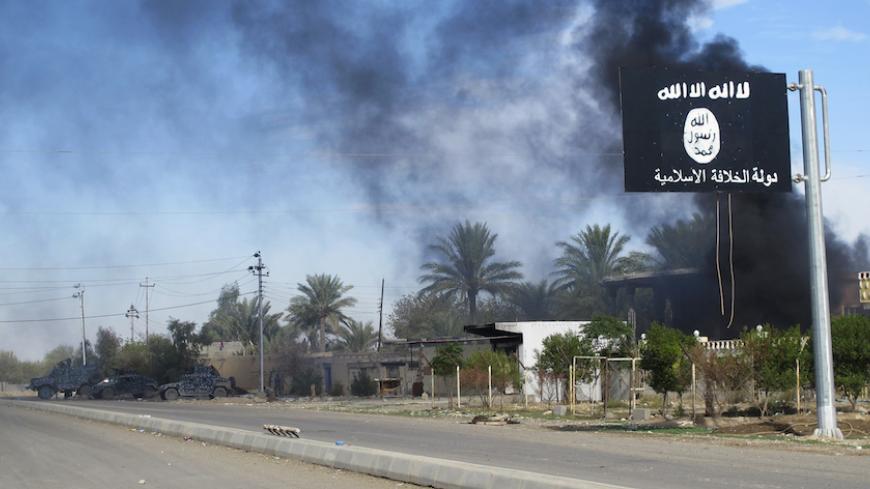 Smoke rises behind an Islamic State flag after Iraqi security forces and Shiite fighters took control of Saadiya from IS militants, Nov. 24, 2014. - REUTERS/Stringer

The expansion of the Islamic State (IS) has caused serious concerns about the possibility of states in the Middle East collapsing. Yet a careful reading of the situation reveals that IS is in fact gradually strengthening the state's role as the pivotal actor in regional politics. This is significant in three aspects.

First, powerhouses such as Iran, Turkey and Saudi Arabia are gradually acknowledging the necessity of regional cooperation. Of crucial importance, their approach is mainly based on keeping current states and state institutions intact. This is particularly the case in crisis-hit Iraq, Syria and Lebanon.

To halt the spread of IS, which seeks to establish a pan-Islamic caliphate that doesn’t recognize current national borders as well as international norms and institutions, regional powers have been forced to adopt proactive policies to prevent the complete collapse of weaker states. The priority of Iranian, Saudi and Turkish policy toward Iraq and Syria is, thus, to avoid the collapse of the respective Iraqi and Syrian states. Needless to say, this objective is pursued with different aims and principles.

It is clear that for regional powers intent on preventing the spread of insecurity into their own territories — and who seek to preserve regional security for distinct political and economic reasons — there is no choice except to strengthen the institution of the state in the neighborhood.

Make no mistake; IS activities in Syria have so far been at the expense of both the Syrian regime and moderate opposition groups. It is no secret that the latter are jointly in favor of keeping the Syrian state intact. The status quo is not benefiting the interests of any of the regional nor extra-regional actors involved in the Syrian crisis. Similarly, the expansion of IS in Iraq, which has pushed the country to the brink of collapse, is not benefiting any of the relevant parties.

Second, in the domestic arena, there has been a change in the public view of the place of the state in establishing order and stability. IS is a new kind of common threat that has brought with it extreme violence, increased sectarian divisions as well as attacks on human values and historical heritage. This has increased the sense of insecurity among people in the region. Indeed, the situation is boosting popular support for current states and state institutions as the only option to battle these kinds of threats.

In fact, as a result of the Arab Spring, a shift from traditional minimal government to maximal government is gradually taking place. As part of this, we are witnessing the gradual establishment of inclusive governments that allow all political forces to address the current political crises and to bring stability, all of which is necessary to battle IS. The current situation in Iraq is a prime example of this.

Third, at the international level, and especially in the West, there is a gradual understanding that cooperating with regional countries and strengthening existing state institutions is the only way to battle IS. IS has managed to adjust its operations to different geopolitical, historical and socio-economic contexts of countries and regions. It operates differently in Iraq, Syria, Afghanistan, Libya, Egypt, Malaysia, France, etc. Therefore, it seems that the West is reaching the conclusion that a less costly way to battle IS is to enhance existing state institutions — whether traditional or modern — and encourage regional cooperation. As a function of this, the West further perceives cooperation between Iran and Saudi Arabia on regional crises as an urgent necessity and precondition to seriously battle IS.

At the same time, the international community is increasingly realizing the complexities of the post-conflict situations and state-building processes in the region. This includes the necessity of enhancing existing state institutions, such as police, armies and other security forces. The experiences of Afghanistan, Iraq, Syria, Yemen and even Egypt show how the gradual weakening of these institutional forces creates power vacuums that provide the grounds and necessary political space for the expansion of terrorist groups such as al-Qaeda or IS. Similarly, the heavy presence of extra-regional actors in regional equations is giving these extremist groups the opportunity to justify their activities, mainly in the name of a war against outsiders and their local partners, thereby assisting with the recruitment of new forces.

As the issue of how to deal with IS is becoming ever more complicated, the international community is realizing that the optimal policy at present is to initiate cooperation with the major regional states as new political and security partners. For instance, the improvement in relations between Iran and Europe is first based on the acceptance of the value of their partnership in mutually addressing regional problems, including IS.

In sum, the threat of IS is in effect strengthening the states in the region. To defeat IS, three things must be considered. First, regional/extra-regional cooperation is necessary to create a common understanding of how to preserve stability, thereby battling IS. Second, inclusive governments must be established to attract all political forces to battle this common threat. And third, as a result of increased public expectations, more independent policies by regional states must be pursued in their relation with great powers.