Iraqis are increasingly buying precious stones, which they believe have therapeutic capacities, can give energy and strength, protect them from envy and fend off dangers. 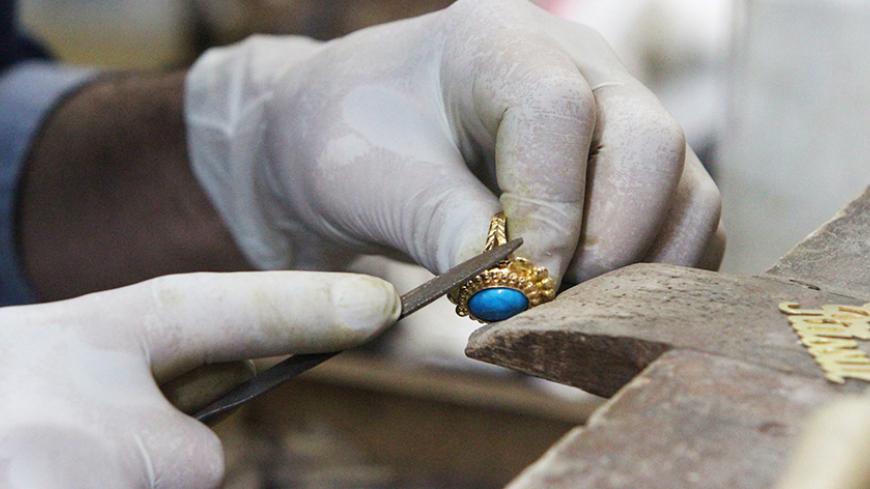 A goldsmith works on a ring in a workshop at a gold market in Basra, southeast of Baghdad, Feb. 14, 2015. - REUTERS/ Essam Al-Sudani

BAGHDAD — Ali Jaafar’s search to find a cure for his daughter’s depression ended when he visited an oracle in Najaf, about 60 kilometers (37 miles) from his home in Babil province.

Jaafar told Al-Monitor he had consulted psychiatric clinics for two years. His daughter was prescribed a variety of drugs, but to no avail. However, the oracle was able to treat her with a stone necklace at a cost of $100. After wearing the necklace for a month, she responded to the treatment and the symptoms of depression significantly declined, he said.

The case of Jaafar and his daughter is not uncommon. Many Iraqis believe gemstones have the ability to treat diseases, solve problems and even ease life’s unsolvable situations.

Ali Amir, a third-grade student, is a believer. “Whenever I have a school test, my mother puts a green bead in my pocket. This has been working well for me. The bead made it easier for me to pass the tests despite my concentration problems,” he told Al-Monitor.

Dr. Qassim al-Moussawi describes this behavior as resorting to metaphysical means of treatment. Speaking to Al-Monitor, he pointed out that this phenomenon did not come out of nowhere. “There is a lack of trust in [modern] medicines and treatments due to the misdiagnosis of diseases by physicians. Moreover, the poor medical services in hospitals have prompted patients to look for treatment using magic and gems.”

Gem stores can be found in many Iraqi cities, and vendors walk the streets selling gems, as they have since the Abbasid Dynasty. Egyptians today resort to the use of gems mainly due to the worsening social and political situation and the resulting personal problems that raise the levels of anxiety and mental disorders.

Saad al-Khafaji, a young university student, wears a special bead necklace to fend off evil. He told Al-Monitor, “My mother suggested this since she is extremely concerned about me, in light of the unstable security and political situation.”

Many Iraqis carry a precious stone to keep them safe and ward off dangers. This is the case with soldier Karim al-Moussawi from Najaf. He told Al-Monitor he bought a precious stone bead for $200 that he always carries on the battlefield for protection. “A bomb explosion in the battle front in the north of Tikrit killed two soldiers in July. I only sustained a foot injury and I survived,” he said.

At a corner of the Najaf market, beads and gems vendor Saad al-Husseini stands in front of a glass container that holds turquoise, agate, amber and coral, as well as inlaid medals, rings and bracelets.

Husseini told Al-Monitor that his gemstones work miracles. “I have stones that can do wonders. There is the love bead that makes a person much loved by everyone, especially women. I also have a precious stone that repels all the evils of enemies.”

He added, “Many of these stones come from Iran, India and Afghanistan, and some of them are from local sources and are found in remote areas in the desert, in ancient archaeological areas and in the desert with rocky soil. Some of the stones are from animal sources such as wolf fangs, wild boar tusks and turtle bones.”

While Husseini was busy rubbing a precious stone with a special cloth, a woman approached him looking for a milk bead, a white stone carried by a nursing mother when her milk is drying up. Husseini described this bead as the best-seller among women because of its effectiveness in increasing breast milk supply.

Geologist Abdul Hamza Hassan gave Al-Monitor a scientific description of gemstones and said, “They are a type of crystals with glass texture that disperse light rays.”

However, people are interested in the purported magical function of these stones. Al-Monitor met some of these people at the jewelry store of Haidar Hassan, who listed the popular types of gems.

He said, “Customers prefer rubies, diamonds and emeralds. There are beads [that work] against the poison of scorpions and snakes, and Aqeeq stones [stone made from agate] that increase their holder’s wealth and revenues. I also have beads made from the tusks of elephants, which give their holder energy and power.”

Al-Monitor visited various vendors of precious stones and gold and silver stores in the markets in Najaf and Babil and noted the different prices of these goods. Amber sells for about $20 per gram (0.03 ounce), while the price of one sapphire bead is $30.

Journalist Ala Koli told Al-Monitor, “Ignorance contributes to the phenomenon of believing in the therapeutic effect of these stones.”

For his part, cleric Karim al-Jabouri told Al-Monitor, “There is energy emitted from these stones that give their holder physical strength and self-confidence. Experience has proved their therapeutic capacity.”

He said that the appropriate color and type of stone are chosen and placed on a specific area of the body for a healing effect on people suffering from psychological conditions and physical diseases, in conjunction with the reading of the Quran.

Resorting to metaphysical treatment and interpretation of phenomena outside the scope of scientific laws is one of the beliefs prevalent in the Middle East. It is part of the popular and religious heritage, which explains the proliferation of astrologers, sorcerers, fortunetellers and oracles. But what strongly promotes these beliefs right now is the political and social turmoil that has led to armed conflicts.