Is it time to formally decentralize Iraq?

Although Prime Minister Haider al-Abadi proposed a reform project to cut down government size, and thus government expenses, Iraq is in need of a decentralized plan. 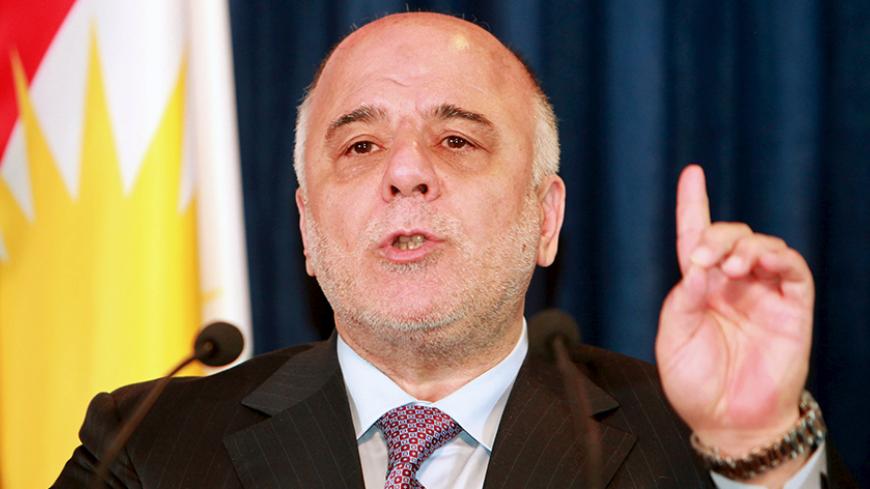 A series of protests in the streets of Iraq has been going on since July 15. The protestors demand the improvement of services and the elimination of administrative and financial corruption prevailing in the state institutions. In light of these protests and following the pressure exerted by the religious authority in Najaf, Iraqi Prime Minister Haider al-Abadi announced Aug. 10 a reform package in the state’s administrative, economic and political structure.

Yet what is missing in this whole reform process is a comprehensive solution to resolve the problem of the Iraqi state, which is still suffering from the effects of the centralized system. The Iraqi state cannot rise without a proper decentralized foundation.

On the one hand, Iraq suffers from a deformed administrative structure that draws its survival from the centralized state. On the other, there is a constant struggle between the central government, Iraqi Kurdistan and the Sunni region. The redistribution of powers and competences within a decentralized nonsectarian system is a key condition for any reform project designed to achieve successful reforms.

Planning Minister Salman al-Jumaili announced in December 2014 that the number of civil servants who are affiliated with the central government reached 3 million people. This figure is the equivalent of nearly 45% of the total Iraqi workforce, according to a study by the Commission of Integrity, an Iraqi government body. In addition to the huge financial cost, the management of such a large staff is a big burden for the central government.

However, Abadi did not succeed in taking any step in this regard before the recent protests hit the Iraqi streets. What happened was nothing more than canceling a very limited number of positions on Aug. 16, such as the positions of deputies to the prime minister and ministerial positions affiliated with the Ministry of Human Rights, the State Ministry for Women’s Affairs and the Ministry of State for Provincial Affairs and Parliamentary Affairs.

These steps did not exceed the mere reduction of employee numbers and distribution of government management among the provinces to alleviate the heavy burden of the administrative structure on the central state.

The distribution of roles between the central government and the provinces within a decentralized administrative system helps improve the state institutions’ performance on the one hand and takes into account the social and economic particularities of the different Iraqi areas on the other. By giving up the heavy administrative, economic and service burdens, the central government will be able to focus on the country’s public affairs, improve security and military performances, and liberate the occupied territories from the Islamic State (IS).

However, administrative decentralization alone is not enough to achieve fundamental reform in the Iraqi state structure to meet the existing challenges. The reason behind this is that since the modern state was founded in 1921, Iraq has been witnessing different ethnic and zonal conflicts that prevented all Iraqi factions from finding a national agreement on the central state system. This issue cannot be resolved without a decentralized distribution of power at the political and military aspects.

The Iraqi Constitution has clearly adopted the federal system and granted broad powers to the authorities in the provinces in “the practice of legislative, executive and judicial powers,” according to Article 121. Yet the implementation of this perception requires a package of laws and legislation in addition to a series of procedures, which were already initiated in the constitution adopted on Dec. 7, 2005, without being implemented so far.

Most important in Abadi’s reform package is the National Guard draft law, which grants the provinces the right to establish their own security forces that are affiliated with the Iraqi army. This idea is based on the need to involve the people in the provinces in defending their areas from terrorist groups, particularly in liberating the Sunni areas from IS.

The Cabinet voted on the bill in February and referred it to parliament. Yet the political differences and ambiguities in the bill have prevented the vote and its implementation.

In addition to the need to take into consideration the perception of decentralization in the existing reform project, major challenges require attention so that the federation or decentralization do not lead to further division and conflict, which would be the end of Iraq’s unity.

Most important among these challenges is the adoption of federalism on the basis of ethnic and religious divisions, which could grant or strengthen the sectarian identity in the provinces. But this would cause further displacements and conflicts among the Iraqi components.

The federal partition plan based on geographical and economic requirements and on the proportion of the population is considered an alternative project devoid of sectarian division. Thus, rather than putting forward the idea of a Shiite region and a Sunni region, administrative, political and security powers will be distributed among regions and provinces that have various geographic, economic and demographic particularities, including the above-mentioned aspects, not only the presence of a religious or ethnic majority there. This is confirmed by the fact that the economic and demographic reality of the Sunni and Shiite areas are not harmonious to even support the idea of giving each sect its own region. There is even a different reality for each region, which requires the consideration of this issue with professionalism and economic and political objectivity.

Abadi’s reform project cannot succeed unless there is a drastic solution to the problem of the weak and inefficient centralized state system that has the various powers. This requires efforts to find a national agreement on the distribution of powers in accordance with practically studied mechanisms and to not slide into sectarian divisions that would drag Iraq into additional problems.

The real decentralized system could eventually lead to more extreme options such as the formation of sectarian and nationalist regions. This requires hard work in order to achieve a real decentralization in the state administration in the long run to ensure that each province has its particularity and ability to manage its own work and investments and to develop its potentials without the curatorship of the central state.