Could US state sanctions on Iran unravel nuke deal?

Critics of the nuclear agreement say states have it in their power to kill it, but do they really? 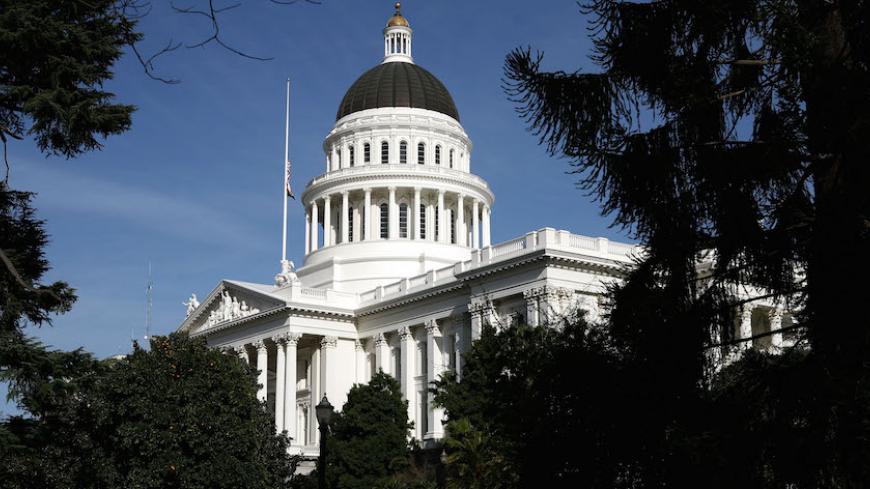 A view of the California State Capitol, Feb. 19, 2009, in Sacramento, California. - GETTY/Justin Sullivan

US critics of the nuclear agreement with Iran are turning to the 50 states as it becomes increasingly obvious that Congress won’t be able to kill the deal.

With hawkish Democrats Bob Casey and Chris Coons all but ensuring opponents won’t have a veto-proof majority in the US Senate, the states are coming under pressure to pass their own sanctions. The Republican attorneys general of Oklahoma and Michigan, Scott Pruitt and Bill Schuette, wrote a letter to their counterparts Sept. 1 urging them to do just that.

“The states certainly have numerous moral and reputational reasons to prohibit investment of public assets into companies doing business with Iran and other countries that sponsor terrorism,” they wrote. “Even if it is true that Iran has relinquished its ambitions for a nuclear weapon and that its deal with President [Barack] Obama will prevent such an acquisition — both of which are highly questionable — Iran engages in a range of other reprehensible activities.”

The letter was accompanied by proposed draft legislation that the states that haven’t yet passed such sanctions are invited to use as a template. States have two main avenues for sanctioning Iran: restricting investments by state retirement plans, and barring state agencies from buying goods and services from blacklisted individuals and entities.

Pruitt and Schuette argue that states have a free hand to act as they see fit because the Obama administration did not craft the deal as a treaty subject to congressional ratification that would make it the “supreme law of the land.” Others question that assertion, pointing in particular to a 2000 Supreme Court case that threw out Massachusetts sanctions on Burma because they infringed on the federal power to conduct foreign affairs.

Under the deal “you’re running into a situation in which there can be foreign investment in Iran’s energy sector or a host of other things, so you’re going to have a situation in which the states are actually doing more than the federal law is,” said Tyler Cullis, a sanctions expert with the pro-deal National Iranian American Council. “And to the extent that there is a conflict between those two, there is a presumption that federal law rules the day.”

There’s little doubt, however, that the states can pass sanctions under a 2010 law — the Comprehensive Iran Sanctions, Accountability, and Divestment Act — because Congress, perhaps anticipating a controversial deal, explicitly carved out a role for the states. The law calls upon the federal government to “support the decision of any state or local government that for moral, prudential, or reputational reasons” divests from Iran.

That provision conflicts with the nuclear deal, which calls on Washington to try to rein in the states.

“If a law at the state or local level in the United States is preventing the implementation of the sanctions lifting as specified in this JCPOA [Joint Comprehensive Plan of Action], the United States will take appropriate steps, taking into account all available authorities, with a view to achieving such implementation,” the deal states. “The United States will actively encourage officials at the state or local level to take into account the changes in the US policy reflected in the lifting of sanctions under this JCPOA and to refrain from actions inconsistent with this change in policy.”

“That’s accurate,” Kerry replied. “But we would urge those states, if Iran is fully complying with this agreement, we will take steps to urge them not to interfere with that.”

The impact of new state sanctions isn’t clear, however, since under the terms of the deal agreed to on July 14 most US sanctions would remain in place, with specific carve-outs for commercial passenger aircraft and parts, carpets and foodstuffs. And European and other foreign companies, while technically allowed to invest in Iran’s energy sector, would have to clear the high hurdle of ensuring that they’re not in business with the still-sanctioned Islamic Revolutionary Guard Corps, which is believed to have a near stranglehold on vast swaths of the Iranian economy.

Some advocates of more state sanctions acknowledge that their ultimate goal isn’t so much to prevent a raft of new investments in Iran but rather to kill the deal outright.

“The Constitution’s Commerce Clause prevents states from imposing sanctions as broadly as Congress can,” former Justice Department officials David Rivkin and Lee Casey wrote in a July 26 Wall Street Journal op-ed. “Yet states can establish sanctions regimes — like banning state-controlled pension funds from investing in companies doing business with Iran — powerful enough to set off a legal clash over American domestic law and the country’s international obligations. The fallout could prompt the deal to unravel.”