Why do Iranian hawks keep circling over Zarif?

With Iran disappointed with US actions in the region following the nuclear deal, prospects for broader dialogue appear dimmed. 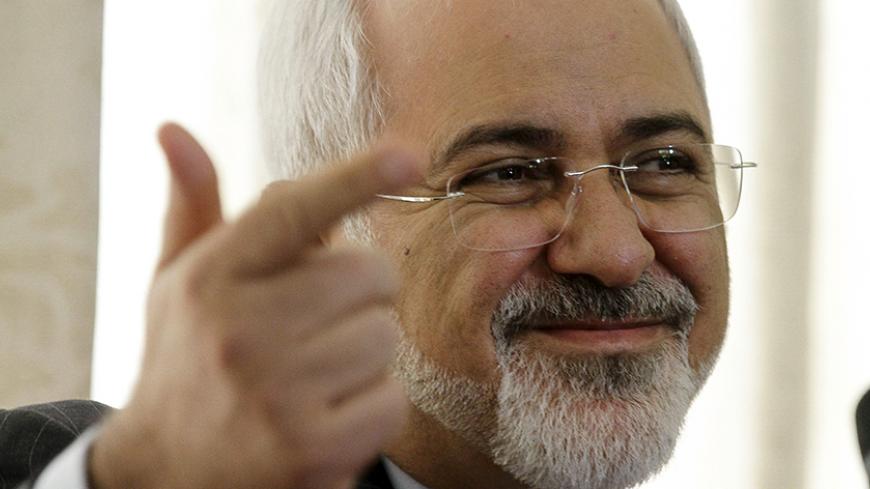 VIENNA — Two months after the landmark nuclear deal between Iran and six world powers, the elegant Palais Coburg appears as just another of many monuments in the Austrian capital. The making of history is over, and it is back to business as usual. In Iran, the same applies to the deal itself. Celebration has ended, and the prevailing sense of national achievement has largely evaporated in the shadow of intense domestic political infighting.

These days, Foreign Minister Mohammad Javad Zarif and his team of negotiators are busy defending the Iranian government’s decision to go through with the deal. Pressure from the Parliament is mounting, driven by some political factions that are seizing the moment to shore up their positions ahead of the forthcoming February parliamentary elections. “This is just another attempt to sabotage this achievement [the deal],” an Iranian MP who’s in favor of the nuclear agreement told Al-Monitor. The lawmaker, who spoke on condition of anonymity, added, “The first days [after the deal], they were lost; they knew not what to do. Then, they started lobbying against the deal behind closed doors, and finally, when they felt that they had affected the negotiating team’s credibility, they are now openly active. But they don’t understand that this is all behind us now.”

The fact is that some in Iran believe in the old saying, “Use your enemy’s hands to kill a snake.” This is one of the reasons why some of those opposing the deal decided to wait and see whether Congress would scuttle it before raising their voices, as they thought US lawmakers may succeed in their endeavor. “We are aware of attempts by some in this government to handcuff our leadership,” an Iranian conservative cleric told Al-Monitor in Beirut a few days ago. “They want to put the leadership in front of two bitter choices: either accept the deal as it is or accept people’s accusations that you sabotaged the deal.”

On Sept. 3, Iran’s Supreme Leader Ayatollah Ali Khamenei made it clear that he wants the Parliament to vote on the deal. He stated, “Parliament should not be sidelined on the nuclear deal issue.” However, he underscored that “I am not saying that lawmakers should ratify or reject the deal. It is up to them to decide." Khamenei, who has final say on major national issues, further added, “I have told the president that it is not in our interest to not let our lawmakers review the deal.”

According to an Iranian source close to the administration of President Hassan Rouhani, “There are attempts by some hard-liners to make noise around the deal, and this has been going on since day one.” The source elaborated that part of this “noise” is linked to the upcoming parliamentary elections. “Conservatives see all reasons for their defeat in the elections,” said the source. “Therefore, they are looking at how to undermine this team. The supreme leader welcomed the deal and praised the negotiating team, but when the noise became louder, he had to take this step.”

On June 23, prior to the July 14 Joint Comprehensive Plan of Action, the parliament overwhelmingly voted in favor of a bill that stipulated several conditions for a nuclear deal between Iran and the six world powers. Of note, it clearly states that any agreement should be presented to the parliament for review based on the constitution and statutory laws. However, the bill does not contain wording on a parliament vote to approve or disapprove a deal.

The source close to the Rouhani administration told Al-Monitor, “Article 77 of the Constitution requires international treaties, protocols, contracts and agreements to be approved by the parliament.” He added, “The Joint Comprehensive Plan of Action does not fit into any of these categories, since it is an announcement. This is one of the reasons for why it is an announcement.”

Another source close to the Iranian Foreign Ministry only answered “yes” when asked by Al-Monitor about whether the parliament is going to vote on the deal, refraining from commenting further on the matter.

The head of the Atomic Energy Organization of Iran, Ali Akbar Salehi, who’s seen as a figure deeply trusted by Khamenei, said in an interview with the ISNA, "The parliament's evaluation and alteration of the content of the deal would disturb everything, because the deal has already been adopted and is no longer negotiable.” Salehi added, “The Parliament has its own authority and will reach its own conclusion."

Meanwhile, the chances of the diplomatic breakthrough this summer translating into momentum for broader dialogue appear to have dimmed. On Sept. 9, Khamenei unexpectedly came out against the possibility of talks between Iran and the United States on other issues. He bluntly stated, “We agreed to hold talks with the Americans only on the nuclear issue," noting that in other areas, "I have not authorized negotiations and [we] will not hold talks with them.” These comments dampened hopes that there will be a route to normalization between Iran and the United States through cooperation on issues of common interest.

Khamenei’s comments have been read by some as an expression of dismay over American actions in the region after the deal, which Iran has apparently considered as contrary to what it had expected. In this telling, Tehran expected a different American attitude mainly in Iraq, Yemen and Syria. However, this did not happen. On the contrary, American allies in the Persian Gulf region are still bombarding Iran’s allies in Yemen, while in Syria, the same allies of the United States are still sending money and arms to armed groups defying the regime of Iranian-allied President Bashar al-Assad. Moreover, in Iraq, attempts by Iraqi Prime Minister Haidar al-Abadi to sideline his predecessor Nouri al-Maliki and his team are also seen as backed by the United States with the aim to limit Iranian influence within the Iraqi government.

Thus, it might be that it is more than mere factional differences to explain why pressure against the deal is mounting in Tehran — even though Zarif and his team have consistently been praised by Khamenei. In this vein, observers would be wise to keep a close eye on how Iran perceives US behavior in the region.