Under domestic pressure over the lackluster implementation of the JCPOA, Iranian President Hassan Rouhani must maneuver to execute the remainder of his agenda — if he wishes to stay in office. 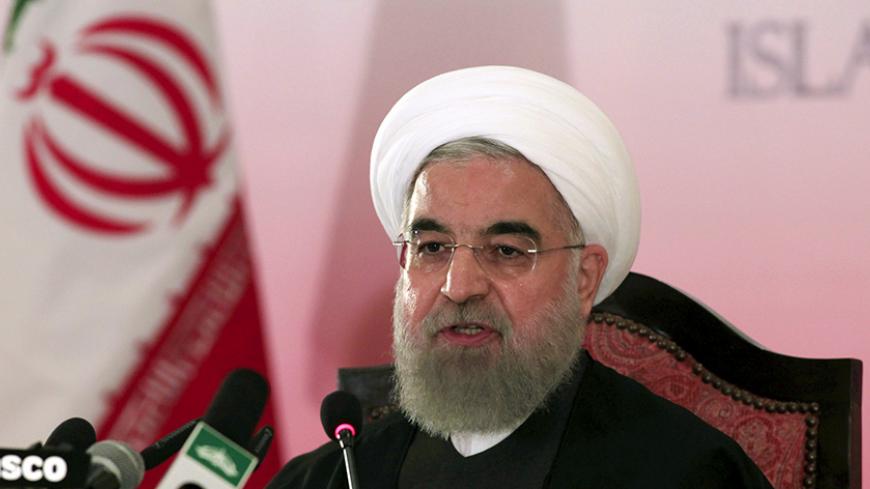 On July 14, 2015, almost 13 years after the outset of the crisis over Iran’s nuclear program, the Islamic Republic of Iran succeeded in reaching a breakthrough in the negotiations with six world powers, signing the JCPOA. For Iran, what was most important was the issue of the nuclear-related sanctions. These sanctions, which Iran had been grappling with for years, were formally lifted Jan. 16, with EU Foreign Policy Chief Federica Mogherini officially announcing the Implementation Day of the JCPOA. While the United States has since formally lifted nuclear-related sanctions, the Rouhani administration is still faced with serious challenges in regard to the implementation of the deal.

The current administration can be viewed as one of Iran’s most distinguished since the country’s 1979 Islamic Revolution. It has notably taken several key steps in the international arena. These steps include measures related to the nuclear file, such as the removal of sanctions and engaging in direct negotiations with the United States — a significant move considering the decades-long absence of dialogue between the two countries. Indeed, ever since Rouhani took office in August 2013, there have been not only widely publicized hourslong encounters between the Iranian and US foreign ministers, but also numerous closed-door meetings between the two sides. These maneuvers are what changed Iran’s image, and ultimately led to, in recent years, many visits by heads of states to Iran — some for the first time — to engage in talks and sign cooperation agreements in different fields.

Given the many obstacles that are being thrown in his way, and especially in regard to the implementation of the JCPOA, Rouhani needs to come up with a serious strategy in order to realize his plans that remain outstanding. This is particularly pressing since Rouhani has only one year left in his term; he faces re-election in 2017.

Ali Tajernia, a prominent former Iranian member of parliament, told Al-Monitor, “The opposition to the Rouhani administration and the JCPOA is natural because these individuals [critics] endured heavy losses in the three [most recent] elections: namely, the 2013 presidential polls, the recent Assembly of Experts elections [Feb. 26] and the two rounds of parliamentary votes [in February and April]. This has angered the opposition [to Rouhani] more than ever, which is why they want to tarnish the government’s public image through their actions.”

Indeed, perhaps contrary to what one would think, the abject defeat of the hard-liners in the recent Assembly of Experts and parliamentary votes may in fact be a disadvantage for Rouhani. This seemingly counterintuitive point should not be easily overlooked, since it can have dire consequences for next year’s presidential elections. The question now is what the Rouhani administration should do to overcome the obstacles in its path.

Ahmad Shirzad, a Reformist political analyst, told Al-Monitor, “In my opinion, Mr. Rouhani should refrain from holding controversial speeches and instead share realities with the public — realities that have not been told, thus misleading some people into thinking that they are free to sabotage the government’s national agenda.” He added, “These individuals — or hard-liners — who were defeated in the parliamentary and Assembly of Experts elections, are wounded and now doing everything [they can] to bring down the administration. The government should do all in its power and tell the people about all realities. This is the only option that is left.”

But this is not the end of the story. Many Rouhani critics think that those throwing obstacles in the way of the administration are the Europeans and Americans, and that the critics are not sabotaging anything at all. Hamid-Reza Taraghi, a prominent conservative figure, told Al-Monitor, “I don’t think anyone would put pressure on the government for implementing the JCPOA. The government knows well that the reason the nuclear deal hasn’t been fully realized is the Americans, who have not abided by their commitments. The problem, however, is that they [the government] have been optimistic about this [JCPOA] from the beginning and based on this optimism, made numerous promises to the public.”

Taraghi stressed, “In my opinion, none of these promises will take shape, and if there is any pressure, it’s from the public. What people are saying [to Rouhani] is, 'You promised our economic difficulties would be solved, inflation would disappear and our businesses would boom if we signed the JCPOA. So why has none of this happened?' Is this sabotaging?”

In this vein, the hard-liners who are criticizing the Rouhani administration don’t see their actions as sabotaging the JCPOA but are rather motivated by their having the public’s best interest at heart. Abdolreza Davari, who previously served as media adviser to President Mahmoud Ahmadinejad, told Al-Monitor, “Didn’t Rouhani say that after the nuclear deal, all sanctions would immediately be removed? So what happened? Mr. [Foreign Minister Mohammad Javad] Zarif also announced that the Americans would abide by their commitments, but has this happened until this day?” Davari added, “Instead of making empty promises, the government should come up with a serious plan.”

Given the sensitivity of this year for the administration, and especially for Rouhani, the implementation of the nuclear deal as well as other measures taken over the coming 12 months will ultimately determine whether Rouhani will preside over Iran’s next government. But with the continuous actions against the government, it is not clear how successful Rouhani will be in his endeavor.