Egypt limits ability of imams to run for office

A few Ministry of Awqaf-affiliated officials announced their intention to run for election, which brought about criticism by religious and political authorities about the extent to which the executive and legislative powers can mix. 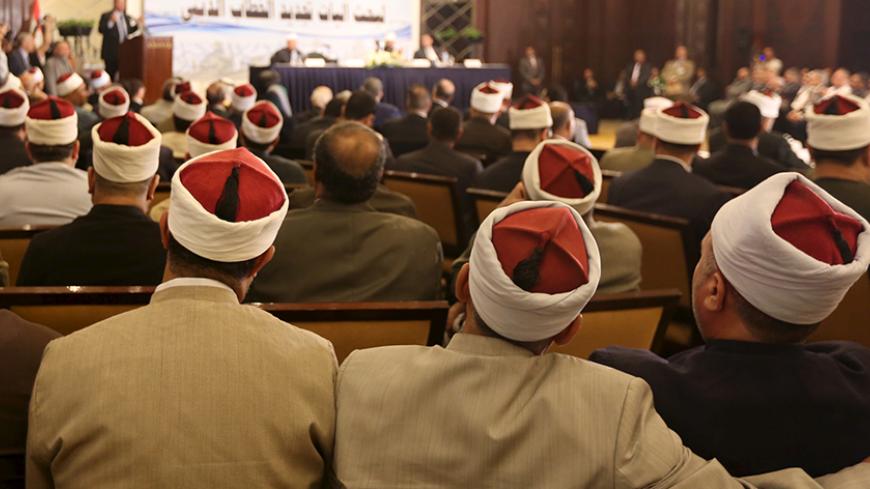 Muslim scholars attend a conference held by the Ministry of Awqaf at the headquarters in Cairo, May 25, 2015.

CAIRO — Continuing its efforts to separate church and state, Egypt has banned its imams from preaching in mosques while running for political office, a move that is stirring controversy among officials, legal experts and, of course, imams.

The Egyptian Ministry of Awqaf (Endowments) issued a statement Aug. 24 that read: “In order to prevent mosques from being used as political platforms, the ministry shall ban all preachers running for parliamentary elections from delivering sermons or religious lectures in mosques starting the first day they announce their nomination until the completion of the election process, so as to prevent them from promoting themselves or others through the use of religion for electoral interests.”

The ministry went further, deciding to “irrevocably strip its leaders who decide to run for elections of their leadership position and privileges within the ministry.”

All ministry employees must secure formal permits before they will be allowed to submit nomination papers to the electoral committee. “In the event its employees nominated themselves without prior permission, they will be referred to investigation and suspended from working [in mosques] until the completion of the interrogation, knowing that [they] will not be granted permits until the completion of the electoral process.”

The statement raised the ire of the ministry’s major top officials, such as its undersecretary in Alexandria, Sheikh Sabri Abada, and the head of imams in Damietta, Sheikh Magdi Nur al-Din. The decree also engendered debate among legal experts and imams, who were divided on the decision.

The ministry’s first undersecretary for preaching affairs, Shawki Abdel-Latif, told Al-Monitor that although the nomination of imams is not against Egyptian law, the ministry’s decision is right, as the focus of imams’ vocation should only be God.

Abdel-Latif added, “The nomination of an imam or a preacher would place the ministry in a very critical situation, in light of its efforts to separate religion from politics and to prevent Salafists and other religious parties from using the mosques as political outlets for their campaigns.”

He pointed out, “Had the ministry allowed its imams to run for parliamentary elections, the political Islamic movement would have accused it of using double standards. The mere appearance of a candidate on the political arena, especially if associated with the Ministry or Al-Azhar, would be regarded as a call to support him in the elections, even if he has not particularly called upon people to vote for him. This is especially true since people in Egypt place clerics on a pedestal, even if they lack political savvy.”

Sheikh Fouad Abdel Azim, the ministry’s first undersecretary for mosque affairs, told Al-Monitor, “The door of nomination is open [to all imams], provided that candidates obtain a prior permit to this effect. The ministry’s statement was to prevent the use of mosques as political platforms, instead of prayers. As per the Law of Oration, all candidates using mosques for political advertisement and electoral propaganda are sentenced to two months in prison and have to pay a fine, in addition to punishment by Egypt's Supreme Election Committee. Thus, the ministry ought first and foremost to impose the law on its workers and block any attempt by political parties to jeopardize it [the ministry].”

Abdul Ghaffar Hilal, a professor of fundamentals of jurisprudence at Al-Azhar University, said that Awqaf Minister Mohamed Mokhtar Gomaa, as the one in charge of organizing work within the ministry, has the right to issue decisions to that end as he deems fit — decisions that would be in the best interest of the ministry’s work.

According to Hilal, those who believe they have what it takes to run for elections ought to be able to sacrifice their job for the sake of the people they represent and to carry out legislative duties instead of trying to combine their job at the mosque with their legislative role.

For his part, ministry official Abada, who is running for the upcoming elections, told Al-Monitor, “Egypt’s law and constitution must be respected. All decisions must be based on the law. My nomination is legal, while the ministry’s decision isn’t.”

He said, “Why is the Ministry of Awqaf banning its employees from running for elections? This is opening the door to radicalism to take over parliament.”

Tharwat al-Badawi, professor of constitutional law at Cairo University, told Al-Monitor, “Real democracy is based on the separation of powers.” It is not acceptable for members of parliament to combine the executive power of their ministry positions in government with the legislative power they would hold if elected, he said.

He noted, however, that combining executive and legislative duties was very common under former President Hosni Mubarak and is allowed under the Egyptian Constitution — which he described as “corrupt and far from being democratic.”

The exercise of political laws, he said, unfortunately provides for the right of executive leaders or those working in the state administrations to obtain a permit to do so, which they can pay for, so as to use their position to promote themselves, according to the principle of transparency. Thus, no party in the state may issue decisions for any arbitrary dismissal of their leaders in case they nominate themselves for the People’s Assembly elections.

Badawi told Al-Monitor he sees the ministry’s decision as a firm step toward separating executive power from its legislative counterpart, which is fundamental for a healthy, democratic life. But while the ministry’s decision could be deemed virtuous, it is wrong to apply this measure only to imams while exempting other government officials.