While the large industrial complexes in northern Syria were once reminders of the strong economic ties between Ankara and Damascus, Aleppo's businessmen now hold Turkey responsible for the destruction and looting of their factories. 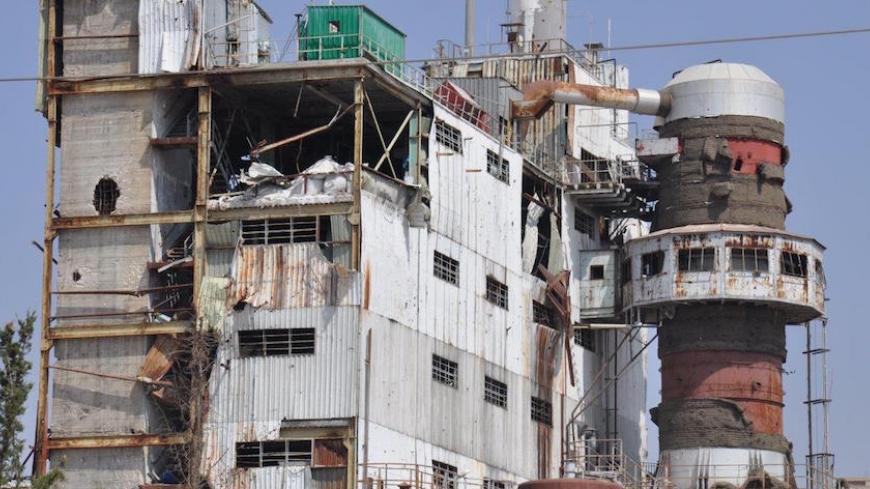 A factory at the Sheikh Najjar Industrial City, near Aleppo, that has been damaged in clashes. - Fehim Taştekin

ALEPPO, Syria — It may not be a bright idea to introduce yourself as from Turkey to people you meet in the areas controlled by the Syrian army. Alevi, Sunni or Christian, it doesn’t make a difference. They are all enraged. But I always introduced myself as a Turk in my travels from Damascus to Aleppo, from Homs to Tartus and from Latakia to Kesab. Almost everybody I met started the conversation, "We like Turkey and Turkish people,” but inevitably ended it with critical remarks against the Ankara government, particularly President Recep Tayyip Erdogan. Many leveled serious charges against Turkey, including supporting terror and plundering.

I listened to a Syrian army commander in the rubble of centuries-old historic buildings in divided Aleppo say, “The basic reason for the fall of Aleppo and Idlib to armed groups is the terrorists sent from Turkey and the support Turkey gives to them.” At Sheikh Najjar Industrial City I heard even more damning accusations that may take Turkey to The Hague. Aleppo industrialists say more than 300 factories were plundered and their equipment sold in Turkey, hence their decision to settle their accounts with Turkey at the International Court of Justice.

In normal days, it takes 20 minutes to reach Sheikh Najjar from Aleppo. But as it was impossible to pass through the area controlled by the opposition militants, it took me an hour. The army checkpoint and a military outpost at the entrance of Sheikh Najjar are always standing by to prevent a repeat of the December 2012 raid by the opposition that seized the industrial city. It looks like a ghost city with hundreds of razed, burned or plundered buildings, among them the International Islamic Bank of Syria, the Bank of Syria and Overseas, and the Delil Battal yarn-spinning factory.

I met the commander at the military outpost. He explained how they took back Sheikh Najjar in July 2014. “They had occupied 80% of the factories. We launched the operation from Hanasir and fought in an area of 100 square kilometers [62 square miles]. It took us 48 hours to take back Sheikh Najjar. They destroyed most businesses by setting off their booby traps as they were fleeing." On buildings groups used as military posts during the 2012-2014 occupation, one can still see slogans of groups like Jabhat al-Nusra.

My next meeting was with Hazim Accan, the director general of the Sheikh Najjar Industrial City. He told me, “One hundred forty-five billion Syrian pounds were invested here in the year 2000. Activities began in 2005. There are 963 production facilities, mostly textiles, food, chemicals, medicines, aluminum, iron and plastics. Today 366 of them are operational. They were badly damaged. Electricity and water systems collapsed. Half of the non-operational facilities were dismantled and taken to Turkey. We don’t know who plundered it, but Turkey is the responsible party. This is why the Aleppo Chamber of Industry and Commerce is taking the issue to international courts."

A businessman from Aleppo had told me in a private gathering in Damascus that some of the army personnel who had expelled the opposition forces out of Sheikh Najjar in July 2014 had taken part in looting. This man, who is close to the regime, added, "First the opposition looted. When the army took over control, soldiers were told to remove what they could. If you ask me, both the opposition and the army were the thieves.”

When I related this conversation to Accan, he was irate. "This is a lie. Factories today are operating with the fuel provided by the army. Nobody can even remove a nut or bolt from here without our permission. We are guarding the factories whose owners have escaped."

Kurdish businessman Muhammed Seydo’s four-story denim factory was burned to the ground in the clash between the rival groups. The looting is not confined to Sheikh Najjar. For example, Halabi Textile Factory on the Damascus-Aleppo highway was set on fire after its machinery was dismantled and taken away.

Deputy President of the Aleppo Chamber of Industry and Commerce Bassil Joseph Nasri first denied the accusations against the soldiers, but when I persisted, he replied, “I must first tell you that those machines cannot be sold in Syria. Their owners will trace them and we will catch the culprits. The only exit route for the looted assets is through Turkey. Yes, among the soldiers there [are] those who stole computers, printers and sometimes cash from safes but not machinery. They were all identified and punished. Their number was not more than your fingers."

Nasri said his organization is holding Turkey responsible for its support of armed groups, for letting stolen goods cross its borders and allowing their sale inside Turkey. He added that after they went to the International Court of Justice, the number of complaints against Turkey has increased significantly. "We set up a special team to work on the court case. The owners of stolen goods are trying to trace them. Some of their serial numbers were erased. But these are special, advanced machinery. It is not difficult to track them down. For example, a Chinese company producing the machinery knows who bought them. There are some businessmen who have located their stolen machinery. One of them even tracked down his machines and brought them back. We know these machines were sold mostly in Kilis, Gaziantep and Hatay provinces. The looters even brought engineers from Turkey to identify the most valuable parts. Sometimes they removed the entire machine, sometimes selected parts. We are pursuing the thieves and new court cases will follow," said Nasri.

Nasri’s own factory is in Leyramun, which is now controlled by the opposition. "I worked with chemicals. I had 100 workers. I don’t know what happened to it except what I see from Google space photography. Let this terror end. I will immediately rebuild.”

At his office, the site of frequent rocket strikes by the opposition, I met Gov. Muhammed Merwan al Ulabi. He showed mortar shells fired at his building with the inscription, "Our gift to Shabbiha," the term for pro-government militias. He too blamed the Turkish government for the looting in Aleppo.

Ulabi said, “Some 6.3 million people lived in Aleppo and in its rural fringes. It is one of the oldest settlements in the world, famous for its historic bazaars and mosques. Emewiye Mosque is 900 years old. Aleppo is going through extremely tough times because of the terror by armed groups supported by the West, Turkey, Saudi Arabia and Qatar. Before the crisis, Aleppo had very close geographical and blood ties with neighboring Turkey. Turkey’s [Justice and Development Party] government provided all kinds of support to terrorists who came from all corners of the world to fight against the Syrian people. They stole most of the industrial plants of Aleppo and carried them off to Turkey. Everybody saw that looting and how they were carried to Turkey. We respect Aleppo’s traditionally close relations with the Turkish people. But we oppose the policies of the Erdogan government. Many times they said they were sending food and medicine to Syria, but they shipped in weapons concealed under medicine crates. If Turkey really wants to fight terror, as it claims, then it has to end this endless support from its borders. If neighboring states stop their logistical and arms support, our people are strong enough to take care of these terrorists. Syria was developing economically and was a safe country before they sent their terrorists.”

Actually, Sheikh Najjar Industrial City was once a symbol of the relations Turkey had developed as part of its “zero problems with neighbors” policy. Many Turkish companies had formed partnerships with Syrians. People remember these partnerships and then recount how machinery and goods were loaded on trucks and carried off to Turkey through the Cilvegozu and Ceylanpinar crossings. Unfortunately, "plundering" and "terror" have become permanent parts of the Syrian lexicon when explaining their saga.