Turkish security forces expand their operations to urban areas in the southeast of the country. 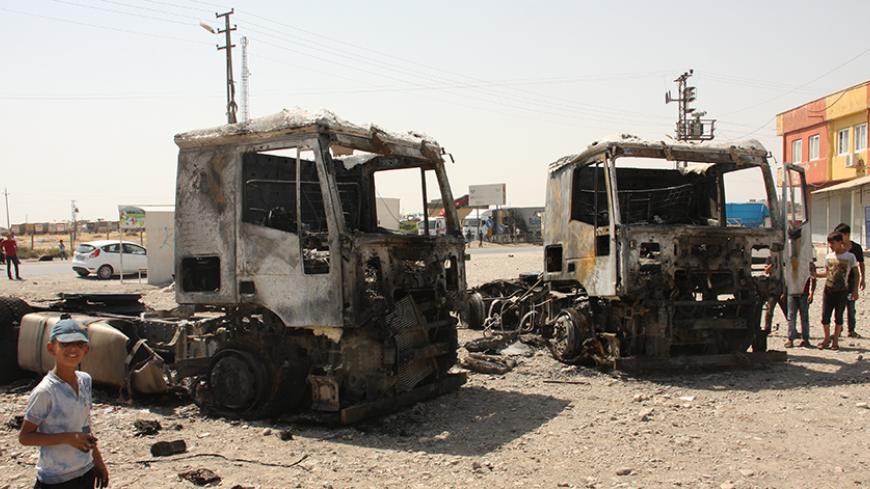 Shown here are the two trucks that were set alight by suspected PKK fighters on the highway between Silopi and the Habur border gate with Iraq, Aug. 12, 2015. - Jasper Mortimer

SILOPI, Turkey — The mother’s face reveals a mix of emotions: grief for the loss of her 17-year-old son, shot while sitting on the front step at 9 a.m.; gratitude for the condolences of the people who fill her courtyard five days after the fatal event; and wariness of the foreign journalist who is visiting for the first time.

Zeynep Tamboga lives in a modest, two-story house in Silopi’s Basak district, which earned notoriety Aug. 7 when its young residents held off the police for four hours. The provincial governor’s office accused the youths of belonging to the outlawed Kurdistan Workers Party (PKK), saying they attacked the police with rifles and rocket-propelled grenades from barricades and ditches dug to obstruct armored cars.

The governor said three people were killed and seven were wounded, including two police officers.

Turkey has been in turmoil since an alleged Islamic State (IS) suicide bomber killed 33 people July 20 in Suruc. But nowhere else has there been such a pitched battle as that in Basak, a low-income suburb whose walls are stenciled with the face of imprisoned PKK leader Abdullah Ocalan.

People in western Turkey have been alarmed by the battle of Basak, as well as a two-hour gun battle Aug. 10 between police and the PKK in Istanbul’s Sultanbeyli district. Such confrontations recall the anarchy that infested Turkey in the late 1970s, an era that ended with the coup of 1980.

Basak hit the news again the week of Aug. 10 when PKK fighters detonated a bomb that blew up a paramilitary vehicle, killing four police officers and wounding a fifth.

Police who arrived on the scene out of rage or panic began firing randomly, according to witnesses. Basak resident Seyhan, who did not want her surname published, invited Al-Monitor into her house to see how heavy machine gun fire — from the turret of a police armored car, presumably — had peppered the walls of her house, wrecking the family tea urn and penetrating her father’s black suit. The street wall of her house bears 27 bullet holes. Similar holes are to be seen on seven houses nearby.

Minutes after the shooting spree began, police came to her house and, finding the door locked, knocked a hole in the wall with pick axes to gain entry.

Seyhan showed the freshly cemented wall where the hole was repaired. She said the police were looking for men, but only women and a child were in the house at 9:30 a.m.

President Recep Tayyip Erdogan has said the PKK must surrender its weapons, and the campaign against Kurdish militants will continue “until not one terrorist remains.”

“We don’t believe Erdogan,” Seyhan said. “He has lied many times. If the PKK put down their guns, then the police could kill us again.”

Much of what happens in Sirnak province, of which Silopi is a part, is not reported in Turkey’s mainstream media, possibly because the incidents often do not cause fatalities.

Fighters, masking their faces with PKK flags, stopped two international transport trucks driving between Silopi and the Habur border gate with Iraq the night of Aug. 11. They forced the drivers to get out, doused the cabins with gasoline and set them on fire.

The driver who spoke to Al-Monitor said the fighters did not harm him, but he was shocked that Turkish citizens could so calmly destroy each other’s property.

A young man who eavesdropped on the interview rebuked the driver for “blaming the PKK.” The driver moderated his answers, declining to say why he thought the fighters had burned his truck.

“They did it to show the state has no authority,” said a Turkish customs official on condition of anonymity at the Habur border gate, who had seen the trucks.

In another incident that escaped mainstream media, a bomb placed in an underground drain in the Sirnak high street exploded Aug. 10, shattering the windows of five shops. Nobody was injured, as most shops were closed at 7:30 p.m. and the street was deserted.

“It was done to frighten people,” said Yilmaz Tatar, who estimated it will cost him more than 15,000 Turkish lira ($5,000) to repair his window and replace the cell phones that were on display.

What is fuelling the rising lawlessness is the collapse of the peace process with the Kurds, who make up about 20% of Turkey’s 75 million people.

Two days after the Suruc bombing, PKK hit men sneaked into the apartment of two policemen in Ceylanpinar, another town on the Syrian border. They shot the policemen dead in their beds. The PKK said they had done it to avenge the police’s “collaboration with the Islamic State.”

This was a turning point. The government launched a large campaign of F-16 airstrikes and detentions against the PKK. Deputy Prime Minister Bulent Arinc gave parliament figures that showed six times as many PKK suspects had been detained as IS suspects.

The PKK announced that the cease-fire declared in March 2013 was finished. In the past three weeks, the group has killed more than 25 policemen and soldiers.

The conflict has reopened old divisions in Turkey, forcing Kurds to choose between obligation to their state and feelings for their people.

In the shaded courtyard of the Tamboga family home in Basak, daughter Kezban expressed her predicament.

She insisted the people in the streets when her brother was killed were not armed. Her brother had been watching the spectacle when he was hit by a police bullet fired from roughly 200 yards.

But some of Basak’s youths must have been armed: Two policemen were wounded and the rioters torched a bulldozer brought in to fill the ditches and remove the barricades.

Silopi parliamentarian Faisal Sariyildiz of the pro-Kurdish Peoples' Democratic Party acknowledged the Basak fighters were armed. And he recognized that, just as the barricades and ditches are still there, so too are the weapons.

“I’ve lived in this kind of environment since my childhood,” he told Al-Monitor. "The police have many more weapons than the young people."

When he was asked if he was afraid of Silopi becoming like Kobani, the northern Syrian town that suffered a four-month battle between IS and Syrian Kurds, he said, “If the government doesn’t give up its passion for control, Silopi could turn into another Kobani.”

One ray of light in this morass of blood, accusation and counteraccusation is Kurdish businessman Shahismail Bedirhanoglu. The owner of a prominent hotel in Diyarbakir, the unofficial capital of Turkish Kurdistan, he is the chairman of the Southeastern Industrialists and Businessmen’s Association, which has met with the prime minister to lobby for change.

Bedirhanoglu is unusually evenhanded in apportioning blame. He condemns the PKK’s killing of the Ceylanpinar policemen as an atrocity that “undermined what the Kurds have gained.”

He faults the government for failing to support the peace process with the legislative reforms that the Kurds expected in return for their cease-fire. “The government has been fooling the Kurds,” he told Al-Monitor in an interview.

The way out of the impasse, Bedirhanoglu said, is for the government and the Kurds to “resume negotiations from where they broke off.” To that end, nongovernmental organizations and CEOs "must put pressure on both sides.”