Syria's tiny Shiite community is taking greater steps toward arming itself as the civil war grinds on. 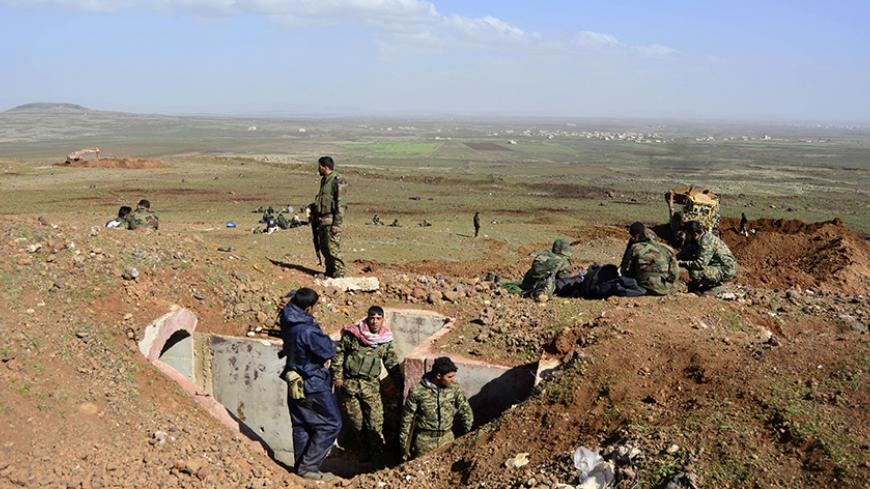 In the four years since the start of the civil war in Syria, Shiite groups have been fighting militant Salafists alongside the Syrian army. The most prominent of these groups is the Lebanese Hezbollah movement, whose presence has had a direct impact on developments on the ground in Syria.

Recently, however, another Shiite group in Syria has caught the media’s attention. Quwat al-Ridha has stepped into the limelight because unlike other Shiite militias, whose ranks are made up of people coming in from abroad, members of this group belong to Syria’s small Shiite community.

According to a report by Orient News, which covers Syria-related news from the United Arab Emirates, Iran is behind the creation of this new Shiite militia. However, it has not been able to provide more details regarding this new brigade. No information has been provided by Persian-language websites either.

However, in an interview with Al-Monitor, Hussein al-Diyab — who hails from a Shiite district of Homs — offered some details on Quwat al-Ridha. Diyab says Hezbollah is responsible for organizing, training and equipping the group and that Quwat al-Ridha can be considered the core of what he calls “Hezbollah in Syria.” Diyab, who long ago moved to Iran to study at the Mashhad University of Medical Sciences, says both of his brothers — one holding a master's degree in mathematics and the other with a bachelor's degree in Arabic literature — are members of Quwat al-Ridha. He told Al-Monitor, “Our family lived in the city of Homs, but when the crisis started, considering the opposition’s violent treatment of Shiites, our family decided to return to our ancestral village of Thabetiya. There are a lot of Shiite villages in the western part of Homs province, and our family thought that it would be safer there.”

Diyab also explained how the Syrian crisis followed his family and other Syrian Shiites all the way to the border villages: “One of the first and biggest suicide attacks organized by the Islamic State, involving seven tons of explosives, struck our village. This lack of security and other concerns resulted in my older brother, who was one of the best math teachers in Homs, leaving his job and putting on a military uniform.”

The Quwat al-Ridha brigade is made up of Shiites from the Syrian province of Homs. This region borders Lebanon to its west, and there are so-called Twelver Shiites living on both sides of the border. Of note, Twelver Shiism is considered the mainstream in Shiite Islam. Its adherents form the majority of the population in Iran, Iraq and Bahrain, as well as a plurality in Lebanon. However, Syria’s Twelver Shiite community is very small, and usually counted alongside the Alawites. Although these two sects have clear doctrinal differences, their Syrian adherents largely support President Bashar al-Assad, who is an Alawite. What greatly binds these minorities is shared fear of the consequences of a radical Islamist takeover. Other minorities, such as Syrian Christians and Kurds, while perhaps not supportive of Assad, nevertheless also have these anxieties.

On the whole, there are 170,000 Shiites living in the province of Homs, which is about half of the Twelver Shiite population of Syria.

Quwat al-Ridha has made a marked impact on the ground so far. Its forces had an effective — and independent — presence in the operation that led to the liberation of the city of Homs and the Shaer gas fields in the eastern part of Homs province. Alongside the Syrian army and Hezbollah, they also participated in breaking the siege on the two Shiite towns of Nubl and Al-Zahraa farther north, in the province of Aleppo. They have additionally participated in battles for the other two Shiite towns of Al-Fu'ah and Kufriya in the province of Idlib, as well as fighting in Daraa, Qalamoun and Ghouta.

Diyab told Al-Monitor that Quwat al-Ridha has a substantial cadre estimated at less than 20,000 members, and said its most prominent commander was Hamza al-Heydar, also known as Hajj Abu Mustafa. Diyab said Heydar was responsible for all Hezbollah special forces operations in the province of Homs, and was eventually killed in the battle for the liberation of Homs’ al-Khalidiya district.

The civil war in Syria has turned the country into a battleground for regional powers, which are trying to settle old scores with each other. During the past four years, Iran has continued to support its Arab ally in Damascus, in spite of crippling economic sanctions. On the other hand, Turkey, Saudi Arabia and Qatar are accused of supporting the rebels. The violence has claimed hundreds of thousands of lives, and forced millions to flee.

Syrian Shiites have indeed paid a heavy price since 2011. Diyab told Al-Monitor, “In addition to dozens of my acquaintances, 25 of my family members have been martyred so far; uncles, cousins and many others. The Shiite community of Syria is made up of only about 300,000 people and 6,000 of them have already been martyred.”

When asked if he’s planning to convince his remaining family members to leave Syria, Diyab said, “I can bring them to Iran, but my family won’t accept it. They say, ‘If we leave our homeland, then who will remain? Should we leave only to make it easier for the Turkish, Saudi and Qatari forces?’”

In a recent op-ed published by several Arab newspapers, Iranian Foreign Minister Mohammad Javad Zarif called for the establishment of a collective regional dialogue forum to “eradicate the sources of tension and insecurity in the region” between Iran and the Arab nations of the Persian Gulf.

Zarif wrote, “We should all accept the fact that the era of zero-sum games is over, and we will all win or lose together. The path to sustainable security does not go through exposing others to insecurity. No nation can cling to its interests without taking into account the interests of others.”

In spite of recent attempts by Iran and Russia to find a solution to the Syrian crisis, it does not appear that there is any collective will among the regional and international actors to end the war in Syria. In this vein, despite mounting bloodshed, Syrians — including Syrian Shiites — appear set to have no choice but to continue feeding militias with recruits.