Gazans use WhatsApp to see what's up with the news

Virtual communication application WhatsApp has taken on a more media-oriented role in the Gaza Strip, whereby media outlets are now using it to send news to subscribers, but there are still things to be improved. 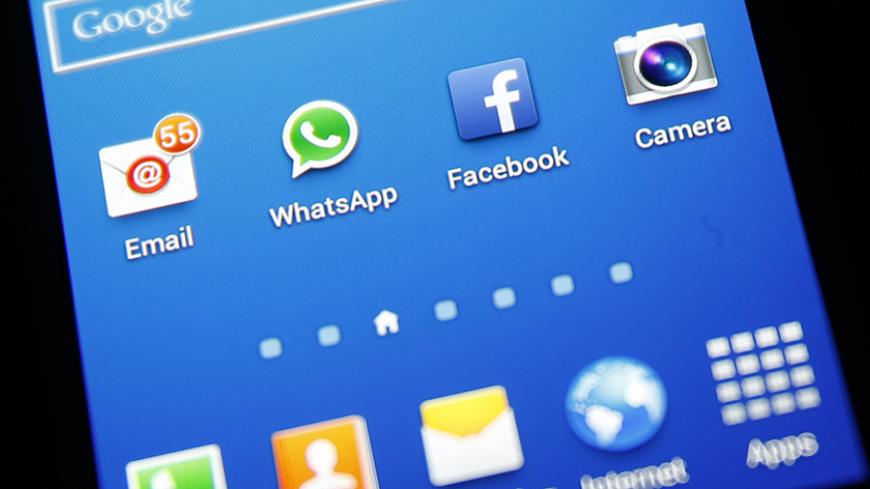 GAZA CITY, Gaza Strip — Once a social media application, WhatsApp is now being used as a news tool in Palestine. Since the last war on Gaza in 2014, media outlets such as Quds TV, Felesteen newspaper and Quds News Network entered in a fierce competition to beat the other to announce the activation of WhatsApp as a free news application.

The majority of news websites and some satellite channels in Gaza are now providing this service to the public. Using WhatsApp, media outlets send news digests covering the daily events on the Palestinian and international arenas.

Seventeen media outlets are currently using WhatsApp in Gaza as a news service, including Quds News Network, Safa News Agency, Paltimes, Sawa and Media 24, among others.

Khaled Ashkar, director of Media 24, told Al-Monitor that Media 24 launched the WhatsApp service in mid-February 2015 with only 17 subscribers, who were employees of the organization. At first, the service was limited to in-house use, but it was then expanded and became public. Ashkar pointed out that any organization wanting to move forward and to develop its work should stay abreast of technological advances.

He believes that “the demand on and use of smart phones and applications have facilitated the spread of news to subscribers in a way that is faster than traditional tools. Internet is now accessible across the Gaza Strip.”

Speaking of competition between Palestinian media outlets and the potential nuisance that might be felt by subscribers due to this competition, Ashkar said that Media 24 has set up rules for employees in charge of the service to avoid bothering subscribers. Chief among those rules is not to send news after midnight, unless the news is very important. Ashkar also said that competition between media outlets sometimes results in them sending contradictory, and even false, news to subscribers.

According to Akhras, Quds News Network — ranking second in terms of the number of subscribers in Palestine — launched the WhatsApp component in late 2014. It started to take its news application form, though, in the beginning of 2015 with more than 5,000 subscribers.

Speaking of how Palestinians can benefit from this service amid the dire situation in which they live, Akhras said that due to the unavailability of 3G — the third generation of mobile telecommunications technology — in Palestine, mobile companies launched Internet roaming bundle services so that they can use the Internet while on the move, thus opening the door for citizens to address the practices of the Israeli army and settlers in the West Bank by, for example, documenting their assaults and publishing them online immediately.

The unavailability of 3G to people in the Gaza Strip is due to Israel’s conditions on Palestinian telecommunications companies, whereby their Israeli counterparts get to select which companies get which services. This is in addition to Israel prohibiting Palestinian companies from importing devices and equipment used to receive frequencies, as Palestinian companies cannot bypass Israel in the process.

It must be noted that Israel gave preliminary approval on Aug. 13 to grant licenses to Palestinian mobile phone companies to use 3G by receiving frequencies independently, not through the Israeli server. This took place following a series of meetings between Palestinian and Israeli sides.

Roukaya Younes, a math teacher and a subscriber to Paltimes’ WhatsApp service, told Al-Monitor that WhatsApp allows her to follow the news in Palestine.

She noted that the most negative aspect of the news services was the overabundance of news they sent, which can prove bothersome to subscribers.

Ahmad Labed, a journalist, has a different opinion. He told Al-Monitor that the overabundance of news did not bother him, but gave him more leeway to ditch his laptop, which he would previously use almost all day long.

Mohssen Frangy, deputy head of the faculty of journalism at the Islamic University of Gaza, believes that any new digital service enjoys its moment of fame and some parties try to use it for purposes other than its initial ones. “WhatsApp has now become a news tool instead of a social one,” he noted.

He said that he recently noticed many ads across the Gaza Strip advertising the new, free news service launched by media outlets. However, he said that one negative aspect is the similarity of news sent by these outlets and sometimes contradictory news that is closely related to the daily lives of the people. Frangy said that the service does benefit Palestinians through allowing them to know the breaking news out of Gaza fast, especially in times of crises.

Mahmoud Abu Ghosh, information security expert and member of the Google Developer Group Gaza, says that the era of technology has arrived, and the availability of Internet has pushed many to buy modern devices that support scores of social media and chat applications.

Abu Ghosh affirmed that mobile companies have helped in promoting these applications and in mobilizing the people to use them by providing bundle services that keep people connected at any time and in any place, notably amid electricity cutouts in Gaza.

Abu Ghosh opposes the opinion that media outlets are taking advantage of WhatsApp and veering off from its main purpose, saying, “The concept of social media comprises all aspects of life. This service further increases connectedness between individuals and keeps them up to date with that which is happening around them and affecting them.”