Wataniya Mobile’s shares in Palestine on a losing streak

Wataniya Mobile’s share price on the Palestine Stock Exchange has dropped below $1 following the company’s entry into the Gaza Strip market. 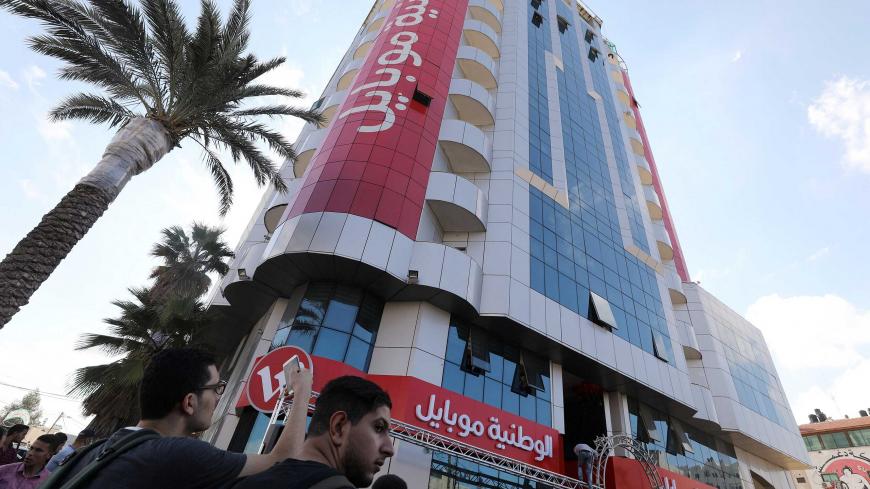 Palestinians stand in front of the headquarters of Wataniya Mobile after it launched services in Gaza City, Gaza, Oct. 24, 2017. - REUTERS/Mohammed Salem

GAZA CITY, Gaza Strip — Wataniya Mobile’s share price fell below $1 on the Palestine Stock Exchange at the end of November. This drop came after the Palestinian cellular provider started operating in Gaza on Oct. 24 amid expectations that it would make a healthy profit when competing with Jawwal, the telecom provider that has monopolized the Gazan market for two decades.

The company, however, is still operating at a loss, and its share price is on a losing streak. This led analysts and economists to believe that Wataniya’s entry to Gaza would only lead to further losses amid the promotional approach it adopted and the services it is offering.

Riyad Shaheen told Al-Monitor, “When Wataniya announced the launch of its services, it offered us the chance to keep the same Jawwal number we have for free, which encouraged me to try out its services for a change.”

He added, “However, the services and prices it offered were not so different from those of its competitor, and this is something we did not expect.”

Laila Mohammed told Al-Monitor that she decided to switch to Wataniya after its representatives came to the headquarters of the institution she works for to promote the company’s offers and packages, motivating her to try out Wataniya. She said, however, that she thought the company needs to offer special programs to serve as incentives for customers.

“The only advantage in Wataniya is that its prices are the same for all networks, meaning if one calls another network, the price won’t double, as is the case with Jawwal. However, its prices are still high, especially as far as the 2G internet packages are concerned,” Mohammed said.

Haitham Abu Shaaban, the acting chief commercial officer and general manager of the Gaza operations for Wataniya, told Al-Monitor, “We were supposed to start operating simultaneously in the Gaza Strip and the West Bank in 2006 after we obtained the license to operate the 3G and 2G systems, but the Palestinian division and the Israeli restrictions delayed the entry of equipment and prevented us from starting earlier.”

He said Wataniya began operating in the West Bank in 2010 after securing all the required equipment. Company officials were unable to get the necessary equipment into Gaza because the Israeli side would not allow them to. He said some equipment was allowed into Gaza in 2013, more came in three years later and the rest in April.

Asked about 3G service in Gaza, Abu Shaaban said the company has the required license but needs Israeli approval to be able to get the needed equipment through. The Paris Protocol, he said, gives the Israeli side control over imports to the Palestinian territories. He said Minister of Communications and Information Technology Alam Moussa announced during the launch of the Wataniya services Oct. 24 that preparations were underway for the 3G service launch in Gaza, but he did not specify when such a service would start amid the nebulous political conditions.

Abu Shaaban said the company has taken into account the economic and political conditions of the Gazan telecommunications market and designed its programs accordingly.

He said that the network covers all of Gaza and that there are technical teams tasked with monitoring any potential problems.

He said sales have been better than expected, but refused to disclose the number of phone chips sold. Some news websites said Wataniya sold nearly 120,000 chips within 20 days of its launch.

Abu Shaaban said Wataniya has 33% of the market share in the West Bank, indicating it might be higher were it not for the delay in the company's operation in Gaza, which limited its expansion. He expected company profits to rise due to the expansion of the company’s operations.

Asked about the reason behind the decline in the price of Wataniya shares on the Palestine Stock Exchange, Abu Shaaban said it had nothing to do with the company’s launch of operations in Gaza or failure to keep up with the competition, stressing that there are other variables, which he did not specify, that affect stock exchange prices.

Ziad Al-Sheikh Dib, the director general of licenses at the Ministry of Communications and Information Technology, told Al-Monitor that the ministry, using strategic plans and laws, aims to promote competition in Gaza, keep the market open for all competitors, create a market-friendly environment and put an end to long-term agreements that promote monopoly.

“When Wataniya Mobile entered the fray, it eliminated a two-decade monopoly in the mobile telecom market, and this is bound to positively affect Gaza,” he said.

Dib said the ministry receives complaints from citizens about the services provided by the two companies through its complaints and follow-up unit. It also periodically monitors and checks companies’ compliance with applicable regulations and laws.

Economic analyst Amen Abu Aisha told Al-Monitor that Wataniya did not provide what he called a hearty meal for Palestinian consumers and thus failed to motivate them to switch from Jawwal. Wataniya's prices, services and offers were very close to those made by Jawwal, which had monopolized the market since 1999. Also, the offers were not well promoted and did not take into account the needs of the Gazan citizens.

“Consumer demands must be met efficiently and qualitatively. And prices should be reduced,” he said.

Abu Aisha said the share price decline was caused by the company’s failure to attract new consumers, while indicating that other market variables also were at play. He said that acquiring only 33% of the West Bank market, despite being operational there for more than six years, is not a good rate. He called on the company to base all its programs on both community responsibility and the development process.

Residents of the Gaza Strip are still hoping Jawwal and Wataniya will offer packages and reduced prices in line with their needs and economic conditions. They also hope the Ministry of Communications and Information Technology will allow a third mobile telecommunications company to enter the fray.