With the recent arrest of the Khobar Tower bomber, Saudi-Iranian tensions have been elevated to new levels. 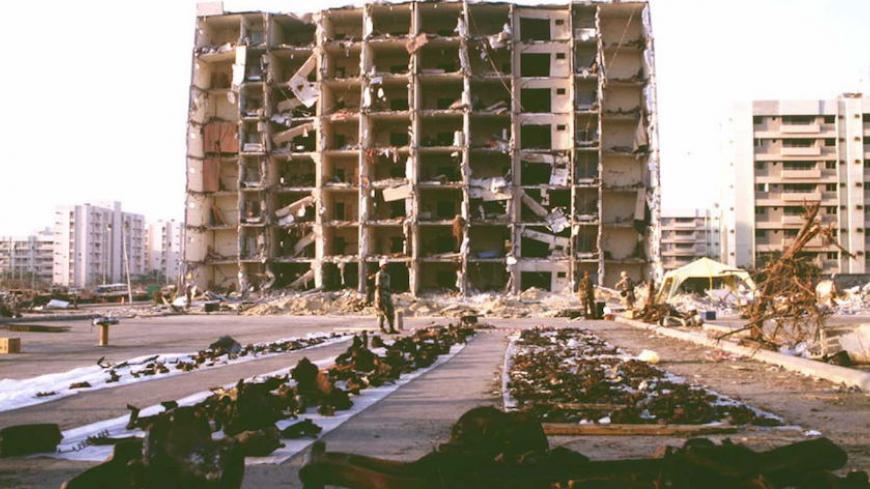 US and Saudi officials spread debris on plastic sheets on June 29, 1996, as they continue to gather evidence in the bombing of the Khobar Towers complex in Dhahran, Saudi Arabia. - AFP/AFP/Getty Images

It was just another Iran Air flight to Beirut, almost fully booked, carrying two or three groups of pilgrims on their way back from visiting Shiite holy shrines in Iran. Friends and family awaited the passengers’ arrival — with one exception.

Intelligence officials were waiting for Ahmed Ibrahim al-Mughassil, the man authorities blame for the 1996 bombing of US military barracks in Khobar, Saudi Arabia, near the Dhahran air base. The blast killed 19 US Air Force personnel and wounded 372. Mughassil is said to be the head of Saudi Hezbollah, also called Hezbollah al-Hejaz, a group that Saudi authorities accuse of being an Iranian arm in the country.

As three men from Lebanon's intelligence branch watched, Mughassil, also known as Abu Omran, was "heading from the plane to the airport security booth to stamp his Iranian passport, which had been issued under a false name,” according to a Lebanese security source.

The source revealed that none of the security personnel who arrested Mughassil knew who he was, yet “they knew he was a most-wanted fugitive.”

“Everything was in place to make sure this operation was carried out with no mistakes,” the source said.

According to information acquired by Al-Monitor, the Aug. 7 operation was a joint effort that involved Lebanese, Saudi and US security. The intelligence part was mainly Saudi and American. “They provided the trusted Saudi information branch with the information, and they did the operation,” said the security source.

On Aug. 15, also at Beirut's Rafik Hariri International Airport, another major intelligence-driven operation took place, this time by Lebanon’s General Security, the Hezbollah-trusted security apparatus. Radical cleric Ahmad al-Assir was arrested; he was using a forged Palestinian travel document and a pseudonym. Assir is suspected of being responsible for the killing of at least 10 Lebanese soldiers in June 2013, when clashes erupted in the town of Abra near the southern city of Sidon between him on one side and the Lebanese army and the Hezbollah-backed Resistance Brigade on the other.

“There's no link between the two arrests,” said the security source. "Assir isn't following the Saudi line — he is financed by another regional party. Since the battles of Abra in June 2013, he has become a liability to his backers." The security source explained that Mughassil cannot be compared to Assir in any way.

“Mughassil’s arrest is a major under-the-belt hit by the Saudis to Iran; now we are waiting to see the response, if there will be any.”

Hours after the arrest was announced Aug. 26, a statement by Hezbollah in Hijaz said, "We hold the Saudi regime and its proxy in Lebanon, the Future Movement, responsible for this cowardly act. We hereby call for the release of our leader and our detained brothers. We stress that the regime, through this crime, has opened a door that will bring them ongoing harm.”

Mughassil was interrogated after his arrest for a few hours by the information branch, and was later handed over to Saudi Arabia.

"The decision to hand over Mughassil to the Saudis came from Prime Minister Tammam Salam after consulting [Future Movement leader] Saad Hariri,” said a political source to Al-Monitor. “Salam didn't even know who Mughassil was. Many here in Beirut thought he was an al-Qaeda operative until the Saudis announced the news.”

Saudi Arabia accused Iran of being behind the Khobar bombing, but Iran denied any involvement. There were also accusations that slain Lebanese Hezbollah military commander Imad Mughniyeh had a hand in the bombing. A third theory pointed to al-Qaeda, whose leader Osama bin Laden didn't confirm or deny responsibility when asked by veteran Palestinian British journalist Abdul Bari Atwan in 1996, according to Atwan.

Mughassil, born in 1967, is a Saudi national. He was the senior Saudi Hezbollah official interacting with the Iranians at the time of the bombing. US authorities believe that Iran directed Mughassil to identify US facilities in Saudi Arabia and that he began surveillance of the Khobar Towers facility and the nearby Dhahran air base nearby in 1994. According to the indictment issued in 2001 by the US Department of Justice, Mughassil made regular trips to Dhahran to direct surveillance and recruit Saudi Shiites for the attack.

The indictment said that the bomb was made by Lebanese Hezbollah and that Mughassil remained in contact with his Iranian handlers throughout the planning and implementation of the attack. Authorities believe Mughassil drove the truck containing the bomb up to a protective wall near the barracks and then detonated the bomb remotely. It generated an explosion equivalent to 20,000 pounds of TNT. In addition to the Americans casualties, dozens of Saudis and South Asian guest workers were injured. Mughassil was thought to have fled to Iran after the attack and his arrest at the Beirut airport now confirms this long-held suspicion.