Speaker of the Iraqi Kurdistan parliament Yousif Mohammed Sadiq, who is leading the opposition to the Kurdistan Democratic Party’s efforts to keep President Massoud Barzani in office, tells Al-Monitor that Barzani has lost his legitimacy. 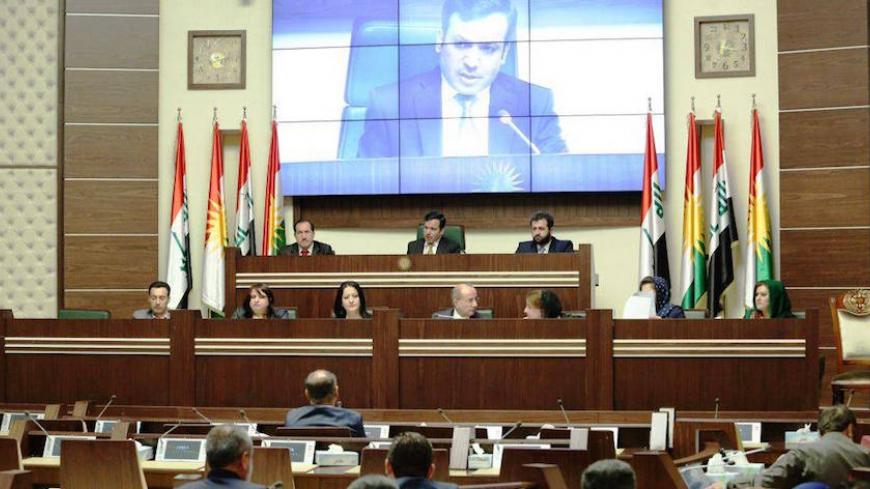 ERBIL, Iraq — While Massoud Barzani continues his tasks as president of Iraqi Kurdistan, controversy rages over the fate of his office. The speaker of the Iraqi Kurdistan parliament, Yousif Mohammed Sadiq, says Barzani has lost legitimacy.

"We have been in a legal vacuum in the Kurdistan Region since Aug. 19 with regard to the issue of the presidency," Sadiq told Al-Monitor from his office in Erbil, the capital of the Kurdish region. Sadiq has been one of the key characters leading the opposition against the Kurdistan Democratic Party's (KDP) efforts to keep Barzani in office.

Barzani and his KDP have based their continued legitimacy on a decision by a government body known as the Kurdistan Consultative Council, which decided Aug. 17 that the incumbent Barzani may stay in his office for two more years. The council deliberated at the request of Barzani's office and Sadiq's deputy, who is a senior official at the KDP.

Sadiq objects, referring to the council's regulations and the parliament’s internal rules, which hold that requesting such a decision must be approved by the speaker.

"We did not ask for an opinion and according to the law, the Consultative Council does not have the right to issue an obligatory decision," Sadiq said.

Barzani has been serving as the Kurdistan Region's president since 2005. When his second term ended in August 2013, the Kurdish parliament issued a law extending his term for two more years, to end in August.

Despite insistence from the KDP that Barzani can legally continue his tasks as the president of the Kurdistan Region even after his legal term expired Aug. 19, Sadiq adamantly disagrees.

"This will be against the laws in Kurdistan. Law No. 19 passed in 2013 … clearly says the president's term ends on Aug. 19 and cannot be extended," Sadiq added.

The Kurdish presidency law also stipulates that the parliament speaker take over the president's duties if the office becomes vacant. But Sadiq has been unwilling to resort to that step.

On Aug. 24, Barzani received a delegation of Norwegian foreign and defense officials in his capacity as president of the Kurdistan Region to discuss the war against the Islamic State (IS). Attending the meeting was Minister of Peshmerga Mustafa Sayid Qadir, who is a senior official of the Gorran (Change) Movement, the party from which Sadiq also hails.

Asked whether Qadir's participation in the meeting undermines his position that Barzani cannot continue to function as president, Sadiq said, "The minister of peshmerga deals with all sides in this war, including the political groups and leaders who manage the front lines — some of whom are not even part of the Ministry of Peshmerga. His priority is confronting IS, and this is the framework within which he operates."

Kurdish parties have been conducting intense negotiations since June on the fate of the region's presidency. Sadiq initially insisted the question be resolved on the parliament's floor and not through back-door negotiations among unelected party officials outside the parliament.

On Aug. 19, the speaker called for an emergency session to discuss a number of bills to amend the presidency law, much to the KDP's chagrin. But the session could not be held, as only 53 out of 111 members attended the meeting, falling short of a legal quorum of 56 lawmakers.

As the parliament has failed to settle the issue, Sadiq said negotiations outside the legislature should now be given a chance.

"We don't want to further compound the already complicated situation in Kurdistan. We're waiting for the negotiations to reach a suitable solution," Sadiq said. "But if a solution is not reached, then we will assign legal advisers and a legal committee to find a legal exit out of this situation."

Sadiq noted there is no time frame for negotiations, but if a political settlement is not reached, "Holding elections is one of the exits out of the current situation."

In June, Barzani had asked the Kurdish electoral commission to organize presidential elections, but the newly established body said it needed six months to prepare for a vote. No date has yet been set for an election.

Sadiq insists that Kurdistan should have a parliamentary system in which all aspects of governance are subject to oversight by lawmakers.

"Now some institutions are outside parliament's monitoring such as the Security Council, Kurdistan's foreign relations and the armed forces. And these are all tied to the presidency of the Kurdistan Region," he said.

The deadlock over the question of presidency has been so severe that senior US and British diplomats — including Brett McGurk, deputy assistant secretary of state for Iraq and Iran — have sat in some of the meetings to assist with a solution.

Prominent Kurdish politician Mohammed Haji Mahmoud said Aug. 18 that the Americans are in favor of Barzani staying in office for two more years.

Commenting on this statement, Sadiq said, "The assistance of Western governments to resolve the issues in Kurdistan should be appreciated, especially the US and UK, because they're our allies in the war against terrorists and they've assisted the Kurdistan Region [for years]."

But Sadiq had the following warning as well: "I hope their involvement will be limited to assistance and not interference in Kurdistan's internal affairs and the nature of political parties' agreement. So far, I don't think their efforts have reached that level."

Sadiq appeared satisfied that the political stalemate "has not had any effects on the war against IS so far," referring to a successful operation by Kurdish peshmerga forces against IS in the southern part of Kirkuk province on Aug. 26, driving IS fighters out of 13 villages.