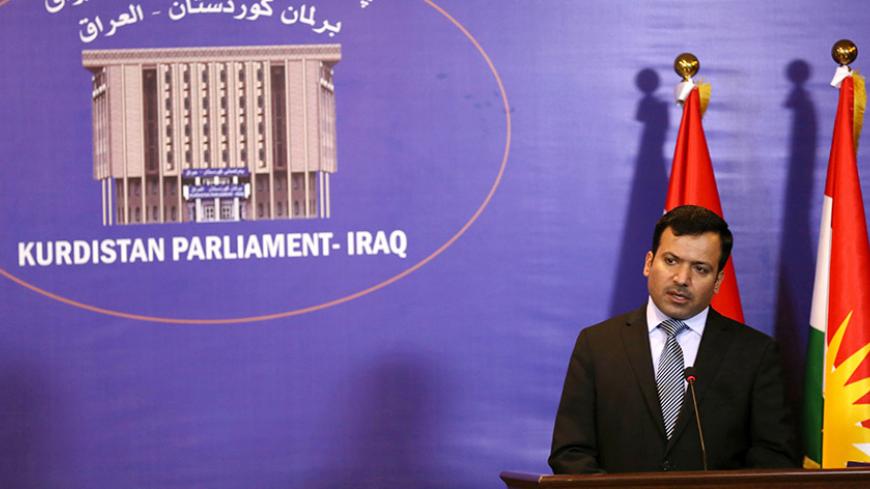 SULAIMANIYAH, Iraqi Kurdistan — When Yusuf Mohammed Sadiq took up the position of speaker of the Kurdish parliament at the age of 36, the political circles in Iraq, and in particular the Kurdish ones, were shocked, as having a young man in this senior position was an unexpected development.

However, almost 1½ years after his accession to office, he remains unable to reach the parliament building in Erbil province after he was intercepted on Oct. 12, 2015, by a military group affiliated with President of the Kurdistan Regional Government (KRG) Massoud Barzani.

Sadiq is affiliated with the Movement for Change, headed by Nawshirwan Mustafa, who founded the movement with a group of his comrades and a number of independents after he resigned from the Patriotic Union of Kurdistan (PUK), led by former President of Iraq Jalal Talabani, almost a decade ago. Thus, this bloc became one of the three main parties in the KRG as well as the federal parliament.

The text of an interview with Sadiq follows:

Al-Monitor:  Over a year after the incident preventing you from entering Erbil, why has the parliament not resumed its sessions? Does this period count as part of your mandate as speaker or not?

On April 29, 2014, I was elected speaker of the KRG parliament and the legal duration of our electoral mandate ends on Oct. 6, 2017, and of course this period is included in the parliament’s mandate.

Al-Monitor:  Your movement — the Movement for Change [Gorran] — does not want Barzani to remain in power, but for the moment he is still the president of the KRG and he is said to be the strongest; and his opponents are unable to oust him. Why so? Why has Barzani remained in office?

Sadiq:  I do not speak on behalf of the Movement of Change since I am parliament speaker now, but no one has tried to oust Barazani even though his mandate ended in 2013. He has refused to let go of his position and his mandate was extended for two additional years.

The fact that political parties can influence the armed forces leads them being used to settle political disputes in the KRG. In addition, Barzani’s presidency is now illegal. According to the extension law issued in 2013, his mandate could be extended up to two unrenewable years. This extension happened following the approval of the PUK and the KDP in the last parliamentary session.

No political party in the KRG nominated anyone to run against Barzani for the presidency. However, there were independent candidates but no political party supported them. There was no intention to oust him, but his legal mandate has ended and he should comply with the law.

Al-Monitor:  In light of unpublicized political crises in the KRG, do you think a new civil war could break out or a division between its provinces could occur?

Sadiq:  Barzani's party took over Erbil in the KRG as its capital, and this is why government institutions in Erbil are under this party’s control.

There is a possibility for the political conflict to turn into an armed conflict, because some political parties have influence over some of the armed forces in the KRG, which they sometimes use to attack opponents or competitors. This happened to me when a large group of armed men prevented me from entering Erbil. If I were to do the same and get an armed force of my own, there would have been a fight. But I refused to take this path and get an armed group to clear the way for me to force myself into Erbil.

The conflict is between two parties, namely the KDP led by Barzani and the PUK led by Talabani — both of whom have considerable influence within the Kurdish armed forces, which can lead to an armed fight.

Sadiq:  The peshmerga forces serve everyone and are dedicated to all the Kurdish people. These forces defended valiantly all the components of the Kurdistan Region, even in the disputed areas. They are funded with the state’s general budget. However, there are some political and partisan agendas pushing for serving partisan and personal interests through the peshmerga, to the dismay of the forces.

Al-Monitor:  It is the dream of every Kurd to see an independent Iraqi Kurdistan and to declare an independent Kurdish state. Does the Movement for Change believe the time is ripe to establish a Kurdish state, or do you prefer to remain part of Iraq? Are the calls by other Kurdish parties at this time carefully studied or mere reactions?

Sadiq:  It is the dream of every Kurd to have an independent state like any other nationalities such as the Persians, Arabs and Turks. A state, however, is built and not declared. There has to be political and institutional infrastructure; then come the negotiations with the federal government to declare the state. There are many complications at the domestic level, as there are no institutions or a good economic situation. It has been six months since the employees in the Kurdistan Region received their salaries. This is not to mention the international complexities that need a dialogue to resolve differences in Iraq.

Al-Monitor:  Will we see the birth of a young political Kurdish generation, which would take the reins from the old generation, or will the latter keep holding sway?

Sadiq:  I consider myself to be one of the young generation, and I believe my appointment as president of the Kurdistan Region is a very important step. However, until now, there have been many hardships in the way for young people to have access to important positions of power and to maintain them.

Al-Monitor:  How do you assess the relations between the KDP with Turkey? Do you find them in favor of the Kurdistan Region, unlike the statements of some of the Movement for Change leaders, who argue these relations only serve personal interests?

Sadiq:  We are seeking to establish friendly relations with neighboring countries. However, building special ties with any of the regional countries at the expense of another or other component or political party in the region would lead to the division of the Kurdish position. … It is not in the best interest of the Kurdistan Region or Iraq to involve the regional conflict. It is also not in the best interest to have different positions vis-a-vis the international and regional crises, as this would lead to sectarian and nationalist rifts, which could lead in turn to a disaster. Thus, the relations should be held with the official authorities, provided that they are balanced and not to be dragged into a regional conflict.

Al-Monitor:  There is a project for establishing an oil line between the Kurdistan Region and Iran to export the region’s oil to world markets. How do you think this would affect the political situation in Iraqi Kurdistan in light of the divided views and position of Kurdish parties toward Iran’s policies?

Sadiq:  It is wrong to rely on oil and gas as a source to finance the budget, given that the oil prices are fluctuating. It is also wrong to have the Kurdistan Region as the state’s sole importer or channel for oil. There is a need to diversify exports and to move away from relying on one single state to this effect. It is in the best interest of Iraqi Kurdistan to hold good relations with Iran and Turkey as well Iraq in the field of energy, as we have seen the region fail when it was exporting oil through Turkey alone.

Al-Monitor:  Will Sulaimaniyah city, where the PUK and Movement for Change are based, become the capital of a new Kurdistan Region? Will Erbil remain the only capital of the Iraqi Kurds?

Sadiq:  It would be a mistake to divide the Kurdistan Region into two parts. We need to try to have a unified region. Yet in fact the region is divided into two authorities and administrations. The best proof is what happened to me; I was prevented from entering Erbil, which proves that there are two authorities.

Al-Monitor:  What is the corruption level in the Kurdistan Region? Does it have an impact on the economy? Are there any solutions?

The Kurdish debt currently exceeds $20 billion, in the absence of strategic projects. Corruption is rampant in Kurdistan. Had the wasted funds been [well] used, the Kurdish economic situation would be much better now. I receive reports from members of parliament indicating that some oil wells in the region were exclusive to influential people who sell the oil as if they own it.