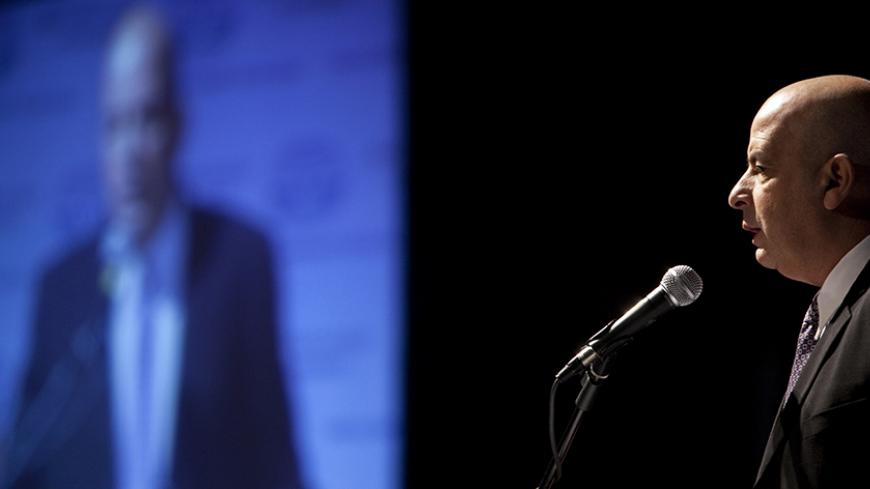 Yuval Diskin, the former Shin Bet head, wrote with bitter irony in a Facebook post over the weekend that Israel was becoming an apartheid regime, or, in his words, “a state based on Jewish halachic law in which a divided Jewish minority rules the Palestinian majority in its midst by force.” According to Diskin, instead of establishing a Palestinian state in the territories conquered in 1967, “a ’state of Judea’ has been established there, controlled by anarchist ideologies opposed to the state, violent and racist.” The man who headed the security agency from 2005 to 2011 stressed that Jewish terrorism — “a cancer in the body of the state” — has been developing for years before the very eyes of the top political, judicial and defense echelons. He diagnosed a lack of leadership and direction as the main cause of this dangerous malady.

And, indeed, Israel is experiencing an acute deficiency of leadership. Prime Minister Benjamin Netanyahu could have successfully run a public relations agency. He may find a way to douse the fires set by that “state of Judea” that burn people in their sleep, damage mosques and destroy fields. But putting out fires is not leadership. Spreading lies about the Arab minority to delegitimize it (on election day, Netanyahu said, “They are heading to the polling stations in droves”) and boasting of superior Jewish morality (“We deplore and condemn these murderers. We will pursue them to the end.”) versus the murderous Palestinians (“They name public squares after murderers of children.”) are all, at best, a dead end, and in the worst case, these roads lead to a precipice.

Operation Protective Edge in the Gaza Strip, where a military achievement was turned into a diplomatic failure, clearly illustrates the price of the absence of leadership and lack of strategic direction. Soon after the operation, Defense Minister Moshe Ya’alon said that Hamas found itself in diplomatic and strategic distress. Quite right. But the question is what Israel gained from this distress. Ya’alon went on to boast that the organization “has lost touch with the Muslim Brotherhood and with Syria and Iran.” Too true. But one should examine how Israel took advantage of the enemy’s diplomatic isolation.

A year after the operation, it now seems that Israel is the one finding itself in diplomatic and strategic distress, the likes of which it has not known for years. Its government has weakened the special relationship it maintained with much of the world. The Israeli Cabinet itself unanimously declared that the six strongest states on Earth had signed a “bad deal” with Iran, the entity considered in Jerusalem to be an existential threat to the Jewish state. Criticism of the occupation keeps mounting, and the Boycott, Divestment and Sanctions movement is gaining momentum. Internal tensions in Israeli society, especially between right and left and between Jews and Arabs, are growing stronger.

On the other hand, Hamas, which lost out on the battlefield, is racking up achievements in the diplomatic arena. In contrast to Israel, the organization has learned its lessons from the latest conflict and is putting them to good use. While the Israeli leadership is bogged down in its all-or-nothing quagmire, Hamas is adopting a pragmatic approach. The extent of the change can be gauged from a new article on the official Hamas website written by Yousef Rizka, the former minister of information in the Hamas government and a close adviser to former Prime Minister Ismail Haniyeh. Matti Steinberg of the Israel Democracy Institute told Al-Monitor that Rizka’s lengthy article, published in Hamas’ electronic library, reflects a dramatic change in the movement’s political thinking. The writer states that the organization’s charter (which calls for the destruction of the “Jewish entity”) is no longer relevant to its diplomatic conduct.

Steinberg stresses that this provides Hamas with room to maneuver, enabling it to adopt more flexible postures without changing its ideological doctrine. Thus, the head of Hamas’ political bureau, Khaled Meshaal, was able to travel to Mecca last month and sit beside King Salman bin Abdul-Aziz Al Saud. This is the same Saudi Arabia that Israel views as a partner in the struggle against the Iran nuclear deal. This is the same Saudi Arabia that bears the standard of the Arab Peace Initiative, which offers Israel recognition of its 1967 borders and normalization of ties with the Arab world. To top it all off, Meshaal has also been invited to visit Moscow. From Egypt, where the organization has been outlawed, newer, more temperate winds are blowing toward Hamas. At the same time, Hamas is giving Iran a bit of a cold shoulder. The deputy head of Hamas’ political bureau, Mousa Abu Marzouk, said in an interview with Al Jazeera that the relationship between the organization and Iran has not thawed to the point of normalization.

As part of the conclusions it is drawing and the renewed planning for extricating itself from its distressing predicament, first and foremost from the blockade of Gaza, Hamas is offering Israel a long-term truce. Though it is not saying so publicly, calm on the Israeli front will allow the organization to block the infiltration of the Islamic State into the Gaza Strip. On the other hand, a quiet southern arena could help restore calm in the West Bank and prepare the ground for a diplomatic thaw in relations with the Palestinian Authority (PA). As Uri Savir wrote for Al-Monitor, citing sources in the PA, if a Palestinian state is not established within two years, on the 50th anniversary of the occupation, there will apparently be no stopping a violent eruption. Palestinian and Jewish zealots will grab each other by the throat and not rest until they light a fire under the Temple Mount and set the Middle East ablaze.

The Jewish terrorists who burned to death the toddler Ali Dawabsha and his father are the successors of Baruch Goldstein, the mass murderer who killed Muslim worshipers during prayers at the Tomb of the Patriarchs. Following that, in February 1994, late Prime Minister Yitzhak Rabin missed an opportunity to display his commitment to ending the occupation and to confront the “Kingdom of Judea” with determination. Instead of taking advantage of the shock and disgust among the Israeli public at the murder of 30 Palestinians and evacuating Hebron’s Jewish Quarter, Rabin sealed off the area to the Palestinians. The message to the Palestinians was that domestic peace with the settlers was more important to Israel than peace with its neighbors.

Instead of trying to catch the deadly mosquitos with administrative detention nets and hollow war cries, Netanyahu should learn the lesson of the 1994 massacre at the Tomb of the Patriarchs. Instead of continuing to wallow in the swamp where the mosquitos fester, he must dry it up. One can start with the evacuation of a half-dozen illegal West Bank outposts. Diskin signed off his prophecy of rage, “One must wait until things get worse, in order for things to maybe get better. … Only then will we start to understand that we must save this incredible Zionist enterprise called the State of Israel, which is growing farther and farther away from the vision of the founding fathers.”