The detention of suspects without indictment or trial, Prime Minister Benjamin Netanyahu's proposed solution to Jewish terror, is neither new nor democratic and avoids implementing the most effective solution, two states for two peoples. 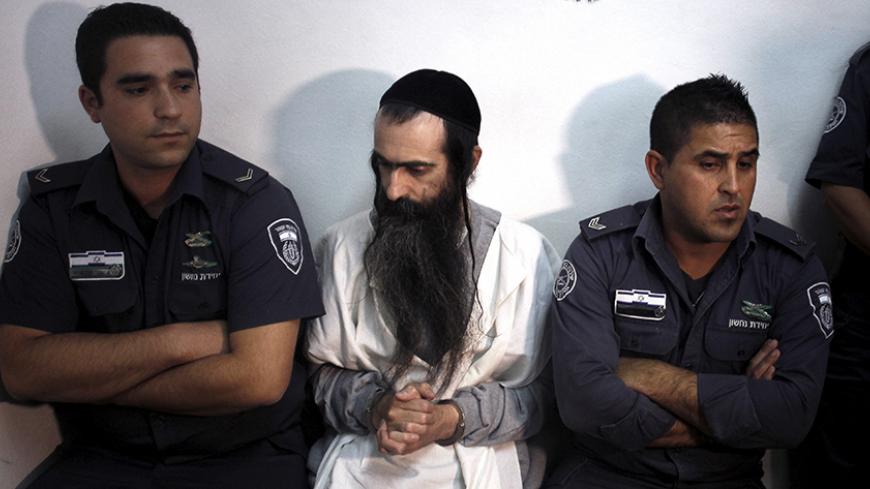 Yishai Schlissel (C) is escorted by security personnel at the Jerusalem Magistrates Court, July 31, 2015. Schlissel is suspected of stabbing and wounding six participants at a Gay Pride parade in Jerusalem. - REUTERS/Muammar Awad

In the early morning hours of Aug. 3, I received a call from the BBC in London requesting an interview on the Israeli security cabinet's decision to apply administrative detention — arrest without indictment or trial — to Jews suspected of terror activity. The radio station's editor thought that the story of a Jew arresting another Jew and holding him without trial is a “man bites dog” story. I then understood that once again, Prime Minister Benjamin Netanyahu had played the media. See, the Israeli prime minister is not content with having simply asserted, “Terror is terror,” regardless of its origins. He must be seen as doing something about it. Once more Netanyahu is showing the world that here, all terrorists are equal before the law. He even established a special ministerial panel tasked with advising the government on additional measures to combat “events of this kind.”

If there is something new in the cabinet’s decision, then one has to wonder why the government is only now applying a law to Israelis that has been used against Palestinians living side by side with them. Over the years, why was this measure used only against Palestinian terror suspects? There is, however, nothing new in the cabinet’s decision. At best, it is an illusion.

Seven years ago, Defense Minister Ehud Barak issued an order to increase the use of administrative detention warrants against right-wing activists in the West Bank. Two years ago, then-Construction Minister Uri Ariel protested an administrative detention order for a settler, Boaz Albert, one of only nine Jews to have had such an order issued against him to date, based on data compiled by the human rights organization B’Tselem. According to these data, in June, 370 Palestinians were being held under administrative detention without having been brought to trial. Many have been under lock and key for years without even knowing the accusations against them.

“This is a tool that contradicts every democratic and Jewish value,” Ariel lashed out in 2013. “In Israel there’s no place for such a thing, which is reminiscent of other, dark regimes. If there is evidence of a crime committed, let the police bestir itself and present an indictment just as every civilized state does.” It appears that as long as this state of affairs only affects Palestinians, he and his friends in government are not perturbed about Israel acting like a dark regime. As long as Arabs are involved, the “democratic and Jewish values” don’t apply.

The message implied by the cabinet’s recent decision is that a few adjustments and improvements to the legal system are all that is needed to ensure the safety of Israelis and residents of the territories; a bit more enforcement against those violating the law and defying public order is the appropriate antidote to the rejection of the “Judea and Samaria” organ transplanted into the body of the State of Israel. Just like many supposedly effective medications, the magic remedy called administrative detention has side effects. The most dangerous one is damage to the fabric of democracy. A fair and transparent judicial process is one of the cornerstones of democratic regimes.

As I contended Aug. 4 in Al-Monitor, the correct way to prevent terrorism against Palestinians and against Jews in the West Bank is to separate the two populations. In other words, end the occupation and establish a Palestinian state based on the 1967 borders. Given that such a resolution of the conflict is not feasible in the foreseeable future, however, advocates of the idea of “managing the conflict” — chief among them Netanyahu and his defense minister, Moshe Ya'alon — must manage it with serious intent. The coin is to be found directly under the lamppost — any lamppost that the government (and not just the current one) funds in each and every settlement. This is true especially of the dozens of illegal outposts in the West Bank and every streetlamp in the Jewish quarter of Hebron, which the late Prime Minister Yitzhak Rabin sealed off from Palestinian access to “protect” the settlers after the 1994 massacre of Palestinians by a Jewish settler at the Tomb of the Patriarchs.

Here are a few bits of free advice for the ministerial task force on improving measures against Jewish terrorism. The first is that every member of the ruling coalition, chief among them government ministers, commits in writing to severing all ties with criminals. The prime minister commits to firing any minister who expresses support for those who violate the law or cooperates with such persons. The decision would, of course, affect Education Minister Naftali Bennett, who came to the defense of the settlers illegally occupying two unapproved structures in the settlement of Beit El that the Supreme Court had ordered demolished. It would also apply to Ariel, now minister of agriculture, who in 2012 boasted in regard to plans to demolish outposts and to settler evictions, “More than once I passed on information [to settlers] about troop movements in Gaza, northern Samaria and even on Assaf Hill.” Even Absorption Minister Ze’ev Elkin, who at the time kept in touch via phone messages with right-wing activists in the “command center” of the outposts, will be required to sign the pledge.

The second piece of advice is that responsibility for the safety of residents in areas of intense friction between Palestinians and settlers should be taken out of the hands of the settlements’ “security coordinators” and given back to the Israel Defense Forces (IDF).

Human rights activists and journalists (including yours truly) have witnessed incidents in which, at best, security coordinators have stood aside as settlers committed violent acts against their Palestinian neighbors. A year ago, police arrested the security coordinator of the Givat Itamar settlement after finding a large quantity of IDF-issue weapons in his office. Udi Levy, commander of the police unit in charge of combating nationalist crime in the West Bank, said at the time, “These are dangerous and combustible weapons that could have endangered local inhabitants.”

Instead of funneling additional budgets for infrastructure to benefit the settlers, the Treasury would be well advised to augment the budget of the district police. The Ministry of Finance, however, recently decided to make deep cuts in the number of police investigators in the West Bank, and police are cutting the field pay supplements that had been given to investigators in those areas.

The third piece of advice is to stop the new law designed to provide legal grounding to the Settlement Division, the operating agency of the settlement enterprise and the outposts. At the same time, the prime minister should instruct Justice Minister Ayelet Shaked, a member of the ministerial task force on fighting Jewish terrorism, to shelve her initiative for a land dispute tribunal in the West Bank that would bypass the country’s High Court of Justice. Her proposal stems from the Supreme Court ruling upholding the demolition order for the two buildings in Beit El. Instead, the attorney general should instruct the State Prosecutor’s Office to refuse to defend the state in petitions brought by human rights activists and Palestinian landowners against settler intrusion on private Palestinian lands.

Finally, a democratic state cannot allow the arrest and repeated extension of remand, the jailing of people for weeks on end or months and even years, without availing them of the basic right to defend themselves.