Iran works to get auto industry back on the road

As the sanctions on Iran are lifted, many hope the Iranian auto industry will be revivied and Western car makers will be pitted against Chinese rivals for shares in Iran's market. 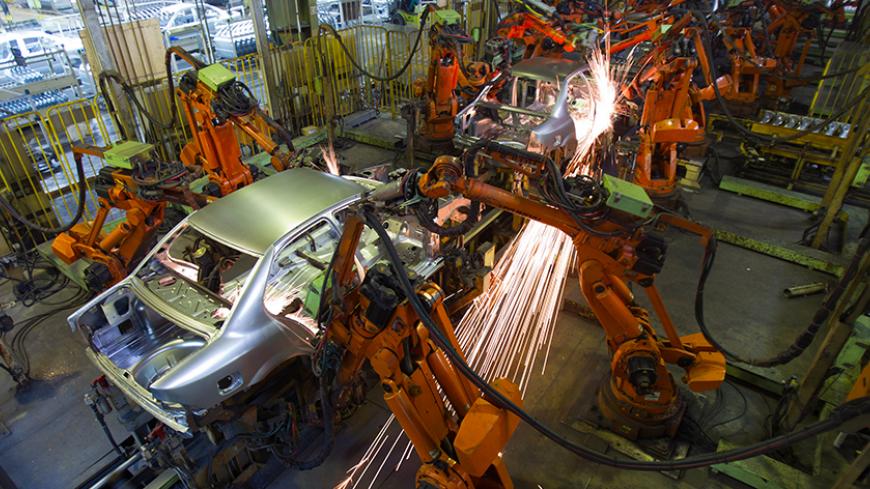 After the July 14 nuclear agreement between Iran and six world powers, one of the issues that has been heavily discussed in the Iranian media is the country’s auto industry.

In order to understand the importance of the automobile industry for the Iranian economy and why there are extensive and heated discussions about it, some important facts need to be borne in mind. Iran is the biggest car producer in the Middle East. Before the economic sanctions were imposed, it was the 11th biggest car producer in the world. The automotive sector is the country’s second-largest industry in Iran after oil. Crucially, it employs more than 700,000 factory workers.

Amin Azad, an Iranian journalist who closely follows Iran’s automobile industry, told Al-Monitor, “The economic sanctions were a big setback for Iran’s auto industry, especially at a time when the auto industry was ready for a big jump.”

Azad emphasized that Western sanctions did not only halt this industry's progress, but hit output and prices: “Production decreased because of the sanctions while the price of cars increased radically, about 300%, because of the same sanctions. Output dropped from 1.5 million cars per year to less than 700,000. More importantly, the quality of Iranian-made cars dropped as well.”

Clearly, the sanctions have had a devastating effect on this important sector. Two years into his term and with a nuclear deal in hand, President Hassan Rouhani now appears to be focusing on reviving the country’s second largest industry.

At a recent meeting with a visiting Swiss economic delegation, Iran's deputy minister of industry expressed Iran’s ambitions, announcing a planned increase in automobile production capacity to three million automobiles a year by 2021. He also underscored that in order to achieve this goal, Iran needs to collaborate with international vehicle manufacturing companies.

While Iran prides itself on manufacturing cars domestically, it is still heavily reliant on imported components. Azad told Al-Monitor, “Iran needs certain computer parts and other sensitive auto parts for its vehicles.” As a result, “Under sanctions, Iranian manufactures had to collaborate with Chinese manufacturers.”

Having taken advantage of the vacuum created by the sanctions to enter the Iranian market, Chinese car manufacturers now face a significant challenge to their expansion. Having been largely shut out or had their operations reduced, Western auto giants are gearing up to re-enter Iran. Iranian authorities and the media are well aware of this impending clash. An economic outlet in Tehran went as far as running the headline: “Western car makers declare war against the Chinese: competition over Iran’s market.”

The Iranian automotive sector is attractive to both Western and Asian car makers for several reasons, said Saeed Movahedi, economic deputy of the Bahman Car Manufacturing Group. He told Al-Monitor. “Currently, the [global] automobile industry is faced with steady demand; this is the case in China, Japan and Western countries. However, we could say that Iran is the only country where cars are in high demand while the government is interested in reviving this industry. Also, in Iran, the car manufacturing companies generate relatively acceptable revenues. This is perhaps the reason why collaborating with Iranians and exporting new products to Iran is a priority for both the major car manufacturers and for technologically advanced countries.”

Movahedi appeared optimistic about the prospects of the Iranian auto industry, saying, “We will witness long-term collaboration between Iran and major car manufacturing companies and they might even invest in the Iranian market.” However, he cautioned that with sanctions set to be in place for some time, dividends won’t be immediate. “I think in the six to 12 months after the sanctions are removed, we will witness growth … and of course the car manufacturing companies will secure more profit as well.”

Despite the optimism about the future of car manufacturing in Iran, the industry has witnessed a slump since the nuclear deal was struck. Reza, who owns a showroom on one of Tehran’s main avenues, attributed this dip to misplaced expectations of the deal’s immediate impact. He told Al-Monitor, “When the agreement was reached, people thought that car prices would drop or that high-quality Western-manufactured autos will be exported to Iran.”

Bearing in mind the devastating impact of the sanctions and the relatively closed market they produced, there will be some sensitivities and considerations. Amin Azad, the auto industry journalist, told Al-Monitor, “It is not likely that Iran would want to completely surrender its own market to foreign companies. Certainly, the two major Iranian manufacturers will continue to have the biggest share of the market.” However, Azad pointed to a clear desire to gain access to new technology and also elevate standards, saying, “Iranian companies are trying to improve their technical abilities and improve their manufacturing quality by collaborating with Western companies. It is not a coincidence that Iran quickly signed a contract for manufacturing engines in Austria or that a new joint Italian-Iranian car design company is set to be established soon. I think if such projects are carried out, and Iran can connect its manufacturers to other car manufacturers in the world, then we can hope that the quality of the Iranian manufactured autos will improve.”

Indeed, beyond exports to the Iranian market, Western companies such as Renault, Peugeot, Mercedes and Volvo have declared interest in using Iran as a hub for exporting their products to neighboring countries such as Iraq, Azerbaijan, Syria and Afghanistan.

Despite its many challenges, Iran’s auto sector seems set to gradually return to its path of growth. And with the collaborative initiatives that are sought, the hope is that Iran will not only be an end destination for foreign goods, but a regional center for car manufacturing and exports.