Egypt must take 'serious step' to resolve crisis with Brotherhood

The circumstances in Egypt and tensions between the state and the Muslim Brotherhood are turning the possibility of a reconciliation less likely each day. 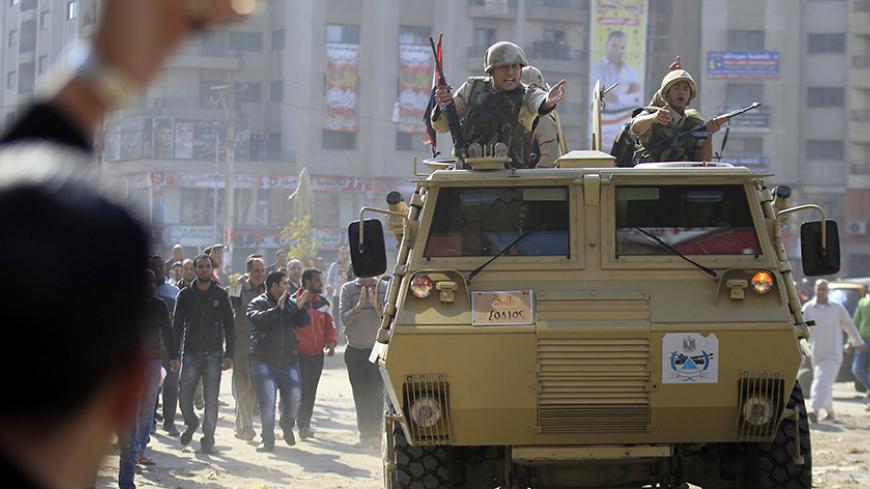 It has been a little more than two years since the Egyptian army and police forces broke up the sit-in held by supporters of Muslim Brotherhood-affiliated former President Mohammed Morsi.

The events took place Aug. 14, 2013, following the revolution of June 30, 2013, that ousted Morsi. Ever since Egypt’s army decided to side with the Egyptian people and overthrow Morsi, talks about reconciliation between Egypt and the Muslim Brotherhood can be heard.

However, an imminent reconciliation may be difficult in light of the known facts. On Sept. 23, 2013, an Egyptian court ordered a ban on the Muslim Brotherhood’s activities and all its affiliated institutions and the seizure of its assets and headquarters. Then in late December 2013, Egypt’s government classified the Muslim Brotherhood as a terrorist group.

Moreover, the Muslim Brotherhood youth seem to oppose the idea of ​​reconciliation. Spokesman for the group, Mohammad Muntasir, wrote in one of his statements on his Facebook page mid-May 2015, “Nothing can speak louder than retribution and the blood of martyrs shed unjustly by the killers. Retribution and a revolution that would decapitate heads is the only solution with these killers.”

There were attempts to contain the crisis, but all were unsuccessful in light of the numerous terrorist attacks attributed by the state to the Muslim Brotherhood. Concurrently, the Brotherhood youth still refuses [to engage in] talks about reconciliation.

In this context, Youssef Nada, the Muslim Brotherhood's former commissioner for international relations, sent a letter June 12 to the Anatolia news agency revealing his willingness to talk with anyone who wants good for Egypt and its people, thus opening a new series of talks with Egypt that could be productive.

“I appeal to every loyal Egyptian to save Egypt from turning into a failed state or primitive states at war with each other,” said Nada in the letter. Nada hoped that his letter would reach one of the decision-makers within the Egyptian government who would look at it [and work toward] ending the current crisis and trying to find a solution. However, Nada did not mention in his letter more details about the conditions of such a reconciliation and the way it could be reached.

Things took a turn for the worse when, on June 16, 2015, a criminal court in Egypt rendered different rulings against Morsi in the case known as “the case of prison breaks and conspiring with a foreign country.” According to the Muslim Brotherhood, this is a state violation against what they described as the “legitimacy of President Morsi” and the January 25 Revolution.

On a different note, the death of Egypt’s Attorney General Hisham Barakat June 29 from a bomb attack on his convoy canceled out any last reconciliation attempt by the Egyptian state, which accused the Muslim Brotherhood of killing Barakat and creating chaos in Egypt. It is worth mentioning that following Barakat’s assassination, President Morsi made a throat-cutting gesture from within the confines of his cage during his trial for the case of conspiring with a foreign country.

Following the June 30 funeral procession for Barakat, President Abdel Fattah al-Sisi said in his speech to the Egyptian people, “So far we have not taken any exceptional procedure. The hands of justice are chained by laws, but we will amend the laws to achieve justice as soon as possible,” in reference to the swift trial of Muslim Brotherhood members to obtain judgments against them.

According to Ahmad Ban, a researcher in Islamic affairs, “All evidence now confirms that there is a zero-sum game when it comes to the [possible] reconciliation between the Egyptian government and the Muslim Brotherhood. Each party refuses the idea of dialogue, which paves the way for reconciliation, especially since each party believes it is capable of eliminating the other party. All evidence confirms that there is a clear obstinacy from both sides.”

Ban analyzed the situation and said, “The Egyptian state and the Muslim Brotherhood believe they are able to mobilize their supporters and influence them to adopt each of their [divergent] points of view. This undermines the possibility of any future dialogue that would form the nucleus of reconciliation. The only loser is the Egyptian citizen, torn between the oppression by the Muslim Brotherhood and the regime’s McCarthyism practice, which is a backward practice that emerged in the United States in 1950 and aimed to tighten control over the Communist government employees.”

According to Ban, the Egyptian state must start with a serious step to resolve the crisis. He explained, “The biggest party shall bear responsibility. The state remains responsible for all its citizens, whatever the situation. The state is an entity that does not act upon moods.”

He added, “If the state genuinely wishes to follow a path toward rapprochement, it must provide an enabling environment to complete the reconciliation so that the Muslim Brotherhood can change their ideas and influence their popular bases to end the prevailing state of congestion.”

Political researcher Ammar Ali Hassan told Al-Monitor, “The Egyptian state has started to realize, now more than ever before, it’s best to continue its dismantlement of the Muslim Brotherhood, as this is one of the main guarantees to block their return to politics and becoming part of [Egyptian] society.” Hassan added, “Saudi Arabia may accept bringing the Brotherhood close to it and then luring the Egyptian state into [a rapprochement with the Brotherhood], within the scope of Saudi Arabia’s alliance against Iranian ambitions in the Middle East.”

There are several attempts to contain the political quagmire currently in place in Egypt and try to achieve a reconciliation between the state and the Muslim Brotherhood to bring stability back to Egypt. However, these attempts are apparently useless, for all the indicators confirm that the circumstances will not change unless a new development takes place.