To improve ties with its Gulf neighbors, Qatar should re-evaluate its ties with Egypt’s Muslim Brotherhood and restore its relations with the current Egyptian government. 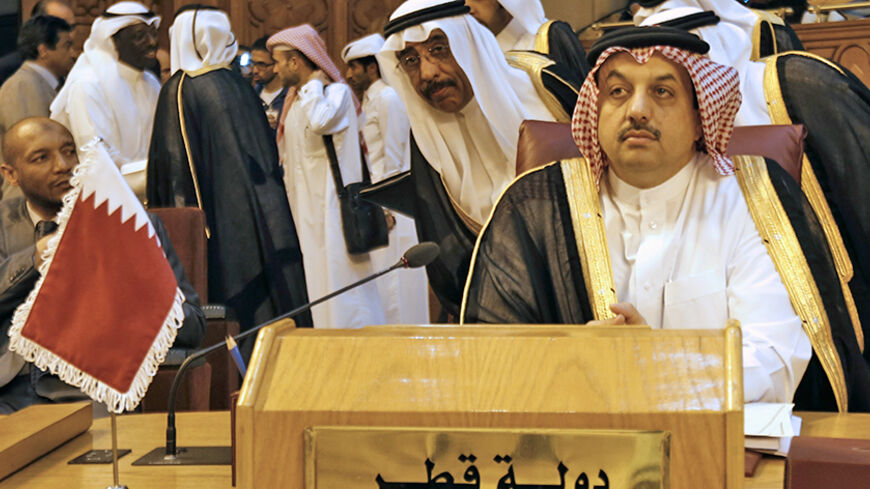 Ever since the popularly backed coup in Egypt in July 2013, there has been a break in relations between Cairo and Doha affecting not only ties between both states but also other matters of interest. Following the devastating Israeli onslaught on the Gaza Strip, Qatar’s Foreign Minister Khaled al-Attiyah proposed the establishment of a commercial port in Gaza to be “internationally supervised.” However, it is unlikely that Egypt, which is suspicious of Qatar’s intentions and the Muslim Brotherhood-affiliated Hamas that runs Gaza, would allow the construction of this vital port to alleviate the suffering of the Palestinians in Gaza. That is just one example of how this break in relations has had negative repercussions on third parties.

Qatar landed itself in hot water earlier this year with its Gulf neighbors following accusations that it is backing the Muslim Brotherhood. Saudi Arabia, Bahrain and the United Arab Emirates withdrew their ambassadors in March only to reinstate them this week following the Riyadh Agreement. Saudi King Abdullah bin Abdulaziz personally called on the Egyptian government to back the Riyadh Agreement and rebuild ties with Qatar. The Egyptian government welcomed the call and declared it to be a “new era” in Arab ties.

It is politically unnatural for Qatar not to have relations with the biggest Arab state, no matter how severe its disagreements with its present government. Even though ties have significantly deteriorated between the West and Russia, the leadership still meets at the G-20 and other forums to discuss issues of mutual interest. To move forward, the Egyptian government should immediately release the three Al Jazeera journalists and reinstate its ambassador to Qatar, where up to 200,000 Egyptians are believed to be living. From its side, Qatar should rein in the inflammatory coverage of its Egypt-dedicated Al Jazeera Mubasher Misr and associated pro-Brotherhood websites that were established in London with Qatari support. Qatar should also actively take part in the planned Egypt economic conference slated for February next year to demonstrate that its support for Egypt was not only restricted to the Brotherhood government.

Earlier this year, Egypt’s former Foreign Minister Amr Moussa, a close associate of the current president, said that there is a possible political future for the Muslim Brotherhood. In an interview with Reuters, Moussa said, "The road is open for them, if they so decide. Field candidates, get into the parliament, the ball is in their court."

Ironically, Qatar’s backing of the Muslim Brotherhood was a contributing factor to the group's unpopularity and hence its overthrow. In its year in power, from the summer of 2012 to the summer of 2013, the Brotherhood government appointed Prime Minister Hisham Qandil, who repeatedly failed to secure a multi-billion dollar loan from the International Monetary Fund (IMF) and other donors that demanded a broad coalition government be formed. Perhaps seeking to alleviate pressure on its Islamist ally, Qatar stepped in with up to $8 billion in aid to the Brotherhood government. This allowed it to perpetually delay the formation of the unity government, which would not only have secured the $4.8 billion IMF loan and unlocked a further $12 billion in bilateral loans, but most importantly would have compelled the stubborn Brotherhood government to include other political forces in its cabinet. Such a move would have satisfied the terms of the loan conditions, thereby potentially easing the rising political tensions that ultimately led to their ouster.

Qatar’s backing of the Muslim Brotherhood also increases the perception among Egyptians that it is a foreign-backed organization, contributes to the intransigence of the Brotherhood leadership and delays essential political reconciliation.

That political reconciliation to which Amr Moussa alluded may be necessary to deal with the challenges that Egypt faces from fighting terrorism to alleviating poverty. Although the Brotherhood has failed in politics and alienated far more Egyptians in a few months than it had in the previous 85 years, its social charity network provided medical and educational support for thousands of families, and translated into votes for them. If Amr Moussa’s offer to the Brotherhood is acted upon, then the group could potentially continue to operate as a social organization, ceasing its indoctrination activities and casting aside political ambitions. In exchange, an investigation into the Rabia al-Adawiya massacre that took hundreds of lives could be launched into the perpetrators from both the government side and the Muslim Brotherhood leadership, which sacrificed its members for political gain.

Wael Nawara wrote in Al-Monitor prior to the Rabia massacre, “[T]he Muslim Brotherhood leaders seem willing to sacrifice more of their supporters’ blood to attract attention, gain internal and international sympathy and possibly improve their bargaining position. Muslim Brotherhood Supreme Guide Mohamed Badei appeared all of a sudden on the stage of the Rabia al-Adawiya sit-in on July 5, 2013, one day after official reports of his arrest, urging protesters to sacrifice their souls for [former President Mohammed] Morsi.”

The Muslim Brotherhood has failed not only the Egyptian public and its own members, but also its backers in Doha. The Brotherhood leadership has refused to acknowledge its failures, partly due to the pocket of financial and media support it is getting from Doha and Ankara. Distancing itself from the Muslim Brotherhood and supporting Egypt is an essential starting point for Qatar to better ties with its Gulf neighbors, especially as it prepares to chair the Gulf Cooperation Council in 2015.

It is time for Qatar to re-evaluate its relationship with Egypt’s Muslim Brotherhood and learn from past mistakes. Rebuilding ties with the Egyptian people, before the government, is an important step in this direction.