'New' Suez Canal might not save Egypt from austerity measures

Despite praise for Cairo's economic achievements and a positive economic forecast, financial hardships are forcing Egypt to consider cutting back as revenues continue to trickle in. 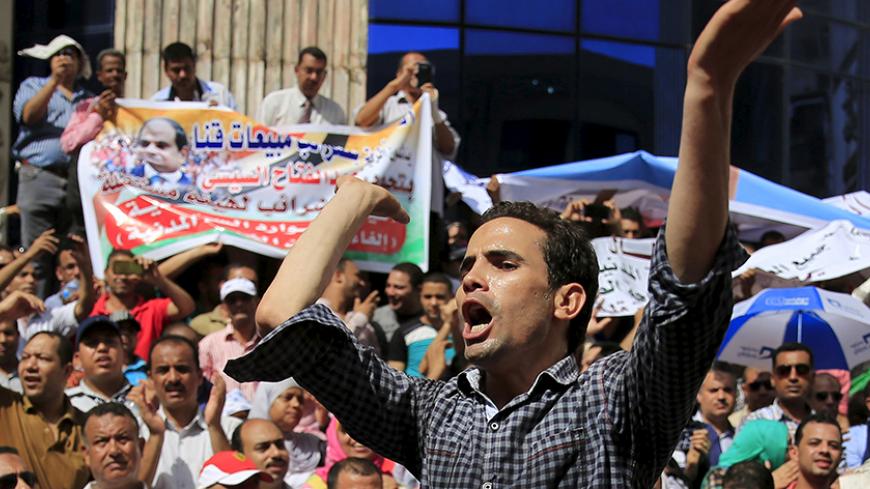 Staff and workers of Egypt's Ministry of Finance Tax Authority shout slogans against Finance Minister Hany Kadry Dimian and the government during a protest in front of the Syndicate of Journalists in Cairo, Aug. 10, 2015. Trade union workers staged the protest to demand the abolition of the Civil Service Law and a minimum and a maximum wage for public servants, local media reported. - REUTERS/Amr Abdallah Dalsh

CAIRO — There is official acknowledgement about improving political performance and strong indicators pointing to an end to the economic crisis that Egypt has endured since the political turmoil of the 2011 revolution. Despite this positive outlook, the ongoing general budget deficit will likely force the government to adopt austerity measures.

The 2015-16 general budget faces a major challenge after the severe cut in foreign grants, decreasing from 25.7 billion pounds ($3.2 billion) last year — following the June 30 Revolution and the large Gulf support flowing into Egypt — to only 2.2 billion pounds ($280 million). The political administration will be pushed to seek other funding to balance its expenditures against its weak revenues, despite the large economic projects announced by the state. These projects include the development of the Suez Canal and a program to build 1 million housing units for people with limited income.

With the ongoing burdens of public debt, exacerbated by increased interest rates, the Egyptian Ministry of Finance looked for alternative funding opportunities to fulfill the state's political promises from the past two years, especially increasing salaries of state employees. The financial statement published online by the Finance Ministry Aug. 14 shows that the state's “promises alone cost a third of a trillion pounds, or 90% of the state's revenues, and 60% of the expected total spending of the general budget.”

During the first meeting of the Egyptian Council of Ministers, held on July 8 after ratifying the general budget and informing official and governmental bodies, Prime Minister Ibrahim Mehleb called on all ministers to present plans for decreasing expenditures. He reiterated that no increase would be allowed and demanded the ministers maximize revenues by using the state's assets, including lands.

Egyptian Minister of Finance Hani Qadri Demian told Al-Monitor, "The most important sources to be used to increase revenues for the new general budget will be to improve the management of the state's assets, mainly mines, stone quarries and lands."

He added, "Due to an unusual inflation of salaries, the salary scale of state employees was restructured, decreasing the spending on salaries to 270 billion pounds [$34.4 billion] for the new budget, compared to 280 billion pounds [$35.7 billion] last year."

Despite the financial hardships, the Egyptian government is committed to fulfill its constitutional commitments to increase spending on the education and health sectors and implement social reform by covering the expenditures of social equity programs.

Demian said, "The general budget channeled focus to the social dimension," explaining, "This focus does not necessarily mean pumping more money. However, there will be an improvement in performance and development of services provided to citizens in the health, transportation, education and infrastructure sectors."

To support comprehensive development across all governorates, the state is taking on many other large labor-intensive developmental projects, such as the waterway deepening project, the reclamation of 4 million acres of land, the national projects to build 3,400 kilometers (2,100 miles) of roads and the golden triangle project in south Egypt.

Despite the state’s support, the projects' economic effects have been limited, and economists and analysts do not expect them to yield any quick revenues for the treasury.

The Egyptian government seems to have ruled out the possibility of adding any new taxes. It already reneged May 18 on introducing several of these, including taxes on capital gains, and on a decision to raise the maximum percentage for income tax. All this limits opportunities for the state to increase revenues to face the expected deficit.

Asmaa al-Khawli, an economic analyst at the Center for Strategic and Diplomatic Studies, told Al-Monitor, "Despite the government’s announcement of decreasing the budget deficit, the adopted policies and measures are not helping." She added, “The fact that a number of taxes have been annulled, a maximum wage was not implemented and there has been increased spending on minimum wage will have a negative impact on the general budget."

Khawli stressed that the "large intensive-labor national projects — which have been supported by the state since Sisi took office — will not generate quick economic revenue for the general budget." She added, "The state support moving from in-kind to monetary support will not decrease the spending on subsidy programs, but will decrease waste and ensure that support is being provided to those who deserve it. Therefore, this measure cannot be relied on as a means to decrease the budget deficit."

Omar El-Shenety, economic analyst and managing director of Dubai-based investment bank Multiples Group, relayed his impressions to Al-Monitor, saying, "The big picture of the general budget policy of the state is neither negative nor positive. Some indicators may witness improvement, such as the growth rate from 2% to 4% due to the implementation of large national projects. This is a good indicator but nonetheless unsustainable."

The Egyptian government is still struggling to improve the economic situation. Away from the official sense of relief and the popular contentment following the first achievement of digging a 35-kilometer (22-mile) canal parallel to the Suez Canal in one year and the exaggerated expectations of ensuing economic gains, the government will still have to scramble to pay for salaries, food and energy subsidies, and spending on health, education and social programs. All this will require more nontraditional revenue-generating programs.