Is US pursuing Iran regime change in nuclear deal?

A former adviser to nuclear negotiator Saeed Jalili wrote that the United States has not abandoned its previous strategies with respect to Iran within the nuclear talks. 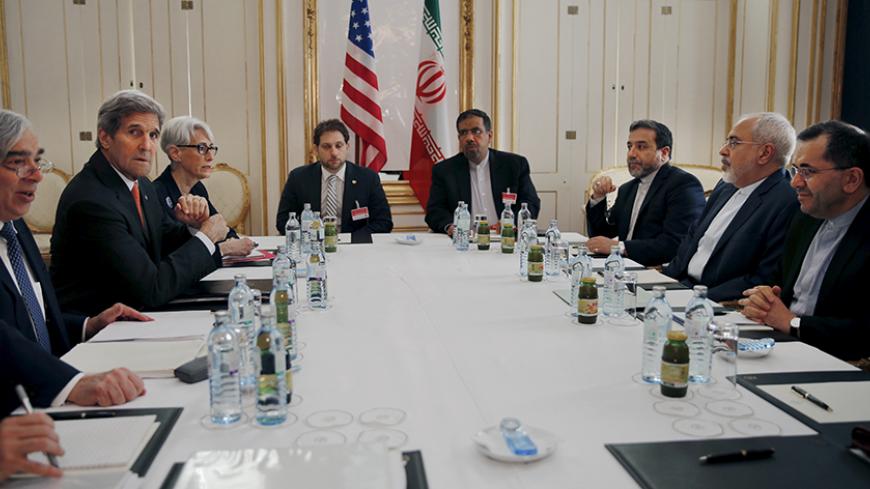 Mehdi Mohammadi, an adviser to former nuclear negotiator Saeed Jalili, wrote an article in hard-line Vatan-e Emrooz titled “The Final Warnings,” discussing what he believes is a possible nuclear deal between Iran and the five permanent members of the UN Security Council plus Germany that will ultimately result in decreasing Iran’s nuclear capabilities. The article by the influential writer is a good estimate on how hard-liners will respond to the announcement of a final deal and perhaps even future points of conflict between Iran and the United States.

“To use everyday language, these negotiations are not able to be stretched out anymore. All the sides are in a position that they have to make a decision. Enough discussions have taken place and the positions have been made clear," wrote Mohammadi. "Whatever creativity all the sides had, they have used. So the question is: Will the combination of the ‘negotiations,’ ‘creativity,’ ‘political will,’ ‘respecting the concerns of the other side’ or even ‘compromising’ result in a good deal or not?”

Mohammadi added, “Apparently the negotiations have reached a dead end in the extra hours.” According to Mohammadi, there are two theories for the last-minute extensions. One theory is that they are a negotiation tactic to push the talks to the last minute. The other theory is that the three remaining issues of removing arms sanctions on Iran, the timeframe of the agreement, and also the amount of limitations on research and development on Iran’s nuclear program have not been resolved and have the potential to cause a collapse of the negotiations.

Mohammadi wrote that the United States is in fact giving concessions to strengthen Western-inclined Iranians in order to change the balance of power in Iran’s domestic politics and on the condition that those Western-inclined Iranians act in accordance with US interests. Mohammadi described these nuclear talks as being within a “paradigm of overthrowing” the government as far as US strategy is concerned.

According to Mohammadi, the United States only chose the path of negotiations as a result of having failed at other measures, such as after failing to overthrow the government through war (Iran-Iraq War), crippling sanctions, intelligence operations against Iran and “sedition” (2009 contested elections).

Mohammadi’s conclusion, his warning, is that if the reports about the three remaining differences on arms sanctions, the timeframe of the deal and research and development are accurate, it is possible that the United States will give concessions on arms sanctions and even the timeframe of the deal on the condition that Iran’s research and development on their nuclear program be limited. He warned, “This is a scenario that the negotiators have to deeply pay attention to.”