Kurds push back against charges of ethnic cleansing

A visit to northern Syria casts doubts on claims that Kurds are carrying out ethnic cleansing in the area. 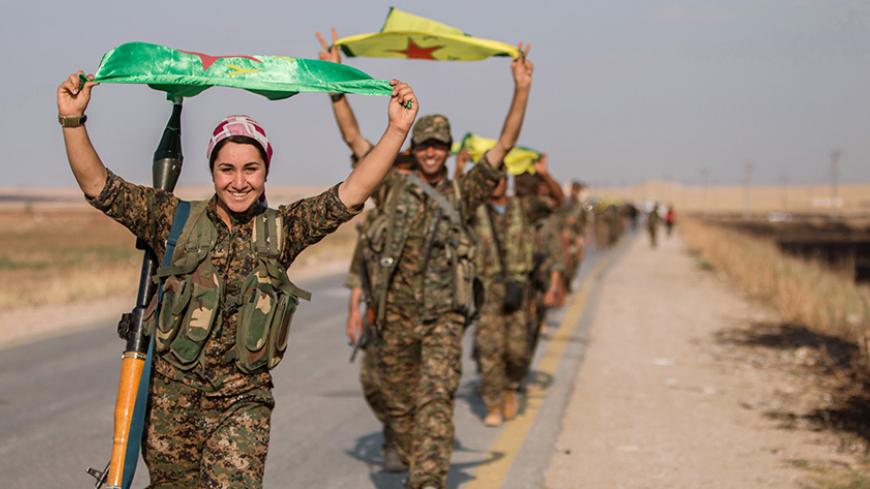 Kurdish fighters gesture while carrying their parties' flags in Tell Abyad, Raqqa province, after they said they took control of the area, June 15, 2015. - REUTERS/Rodi Said 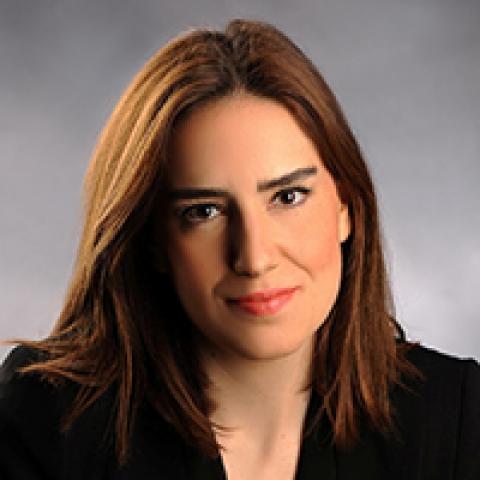 Turkey’s refugee problem reached a new peak following Syrian Kurds' capture of Tell Abyad from Islamic State (IS) forces about a month ago. During the clashes in northern Syria, more than 25,000 Syrians crossed the border into Turkey, increasing the number of refugees in the country to more than 2 million. Yet, this is not the primary concern of the Turkish government. Instead, it has been claiming that the Democratic Union Party (PYD), the dominant Kurdish party in northern Syria, is conducting ethnic cleansing with the intention of establishing an independent Kurdish state. To this end, Ankara charges that the PYD has been exiling Arabs and Turkmens in the region and not allowing the refugees of these ethnicities to return to Tell Abyad.

A visit across the border into Syria casts doubt on these claims.

This visit came after the US State Department had also expressed similar concerns about alleged ethnic cleansing. Its spokesman Jeff Rathke said June 10 that the department was concerned about reports of ethnic cleansing in the area and was “seeking more information about them." John Bass, US ambassador to Ankara, went one step further, stating that “Turkey and the US share common concerns”​ about northern Syria. It had not been possible to verify the allegations because the PYD had kept the border crossings closed for a month. This also led to thousands of Syrians massing on the Turkish side of the border, waiting to return to their homes.

In mid-July, I visited Akcakale, a border town in Turkey, and then crossed into northern Syria, where I had the chance to witness what had developed firsthand. In Akcakale, hundreds of refugees waited in the streets, in parks and along the border for the PYD to open the border gates.

Naturally, the first question I asked PYD officials when I entered Tell Abyad was why they had closed the border gates. Party officials attributed the measure to security concerns, saying that IS militants could easily mingle among the refugees crossing the border. This is how IS jihadis recently managed to attack Tell Abyad and Kobani. The top PYD official in Tell Abyad said that two days before my arrival, clashes had broken out between IS and the People’s Protection Units (YPG), the PYD's armed wing, in Tell Abyad.

Similarly three weeks ago, on June 25, IS militants who had infiltrated Kobani killed 300 Kurdish civilians in the worst mass murder in northern Syria to date. Enver Muslim, co-president of the Kobani canton, emphasized security concerns when I interviewed him after arriving in Kobani. Muslim said, “[IS] can be anywhere at any moment, hence we are constantly on red alert.” Indeed, Arab and Turkmen refugees in Akcakale had complained that the PYD regards everyone as a potential IS militant.

On the other hand, it is not only Arabs and Turkmens who are not allowed to cross back into Syria. The same goes for the large number of Kurdish refugees waiting at the border. Some had fled Tell Abyad because of the fighting between IS and the YPG, while others had migrated from other cities in Syria after IS had invaded them. They said they had been forced to enter Turkey because the roads in northern Syria were blocked.

It seems that the PYD is not discriminating against any particular ethnicity in its closure of the border. Arab and Turkmen refugees on the Turkish side of the border said that they had not been forced to flee, but had run away because of the clashes between IS and the YPG.

The newly emerging local governance of Tell Abyad also does not appear to be acting in a discriminatory manner. A local parliament has been formed for the first time there, and I attended the first gathering, on July 16. Its members are not only Kurdish, but Arab, Turkmen and Armenian as well, representing the diversity of the local population. Moreover, the Free Syrian Army, supported by the West and Turkey, is also represented. Muslim claimed that this inclusive model is being applied in all of the “canton governments” and local parliaments.

The non-Kurdish members of the Tell Abyad governing body whom I talked to expressed their satisfaction over the liberation of the city from IS by Syrian Kurds. They told of atrocities committed by IS members when they controlled the town, for almost two years, before the Kurdish forces expelled them. They said that IS executed or harshly punished anyone who failed to comply with its strict Sharia rules.

In short, non-Kurdish residents do not seem to be overly concerned about who and which ethnic group rules the region at the moment. They are merely happy to have survived IS. Arabs, Turkmens and Kurds appear to have unified in the face of the IS threat. They don’t have the luxury of fighting each other because IS doesn’t differentiate between ethnicities in its cruelty. This has forced the different ethnic groups to seek cooperation among themselves.

The same is true for the PYD. At the moment its top priority is the fight against IS jihadis. This in turn makes it dependent on everyone’s cooperation, including Arabs and Turkmens.

Meanwhile, high-level officials from Ankara and the PYD have exchanged positive messages. Two weeks ago, an official in Ankara said, “There is the possibility of reconciliation with the PYD and a belief that their attitude will change in a positive way.” His main criteria toward this end was that the Syrian Kurds refrain from considering ethnicity when building relations with local peoples.

This view was echoed in Kobani. Muslim sent a strong message of cooperation, stating in our interview, “We could fight against IS together with Turkey. At the moment, we have some dialogue with Ankara about border and trade issues. Yet our relations are not strong at all. We want them to strengthen in the future. If there is any desire from Turkey, we are ready to improve our relations.”

This points toward a cooperative relationship between Ankara and Syrian Kurds possibly looming on the horizon. Yet, it mainly depends on the PYD. The real litmus test for its relations with Turkey and the overall legitimacy of its polity will be how it treats other ethnic groups after it eliminates the existential threat of IS and consolidates power.