Kurds in southeastern Turkey believe the government was intentionally lax in combating a series of local forest fires, which residents think were intentionally set to destroy areas where fighters from the Kurdistan Workers Party had been known to operate in the past. 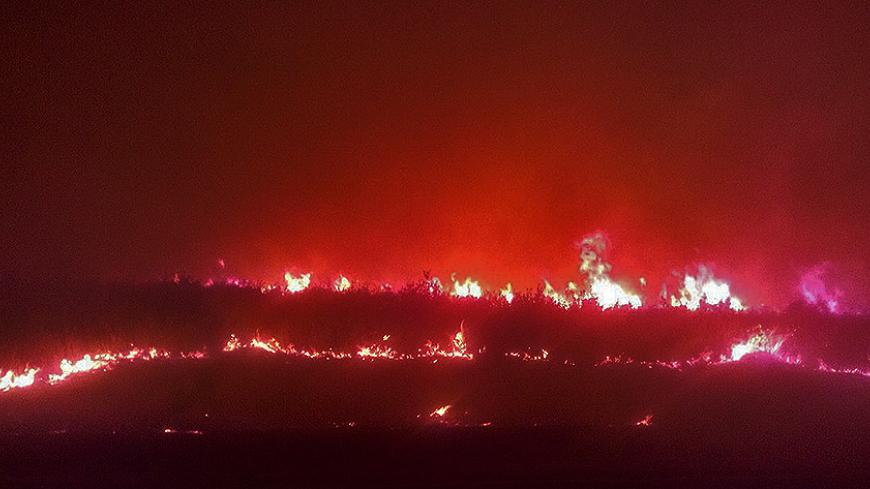 Every summer, thousands of hectares of Turkey's scarce forests are wiped out by fires, some for commercial purposes, others the result of arson and still others from carelessness. The difference this year is that the forests of southeastern Turkey are burning instead of the forests in the west.

As Turkey was preparing for Eid al-Fitr celebrations at the conclusion of Ramadan, news came from Sirnak on the night of July 15 of forest fires on Mount Cudi, a location well known in Turkey from the struggle with the Kurdistan Workers Party (PKK). The fighters the PKK sent into Turkey used trails on Cudi Mountain, providing it steady mention in the news.

According to villagers, a fire broke out after dry foliage caught fire. The mayor of the town of Silopi, Seyfettin Aydemir, told Al-Monitor the foliage had been set on fire by mortars fired by a nearby military unit and the blaze spread rapidly. The first responders, Silopi Municipality teams, proved inadequate for the task at hand, and the mayor called on the townspeople for help. Residents grabbed what they could and rushed to fight the flames. According to Aydemir, it took a long time to bring the fire under control without aerial assistance.

The lack of assistance from public bodies apart from the municipality elicited angry complaints, especially on social media. Some claimed that there had been no official intervention because the fire had broken out in a Kurdish-populated area. There were also pointed remarks about the lack of media coverage. Lara Fresko tweeted, “I saw it today. Elsewhere in Turkey three planes came in two hours. Cudi has been on fire for days.” She was referring to a forest fire in Mersin, on the Mediterranean, that authorities fought from the air and the ground, quickly bringing it under control.

It took three days to put out the Mount Cudi fire. A statement from the governor’s office said teams from the Forestry Department had intervened, but that the cause of the fire remained unknown.

Aydemir, who had been among the first to reach the fire zone, said numerous animals had been killed and thousands of hectares of trees wiped out. Bitter at the lack of official support, he said, “Cudi burned for three days, but there was no state intervention from the air or on the ground. This is what the people here are asking: ‘If this had happened elsewhere in the country, would the government — the state — have just watched?’”

Aydemir believes the Cudi fire had been an arson attack to deny PKK fighters hiding places. Before that fire was extinguished, news came of another forest fire from the nearby town of Beytussebab. In that case, villagers reacted quickly and managed to snuff it out. The Diyarbakir townships of Lice and Kulp were not so fortunate.

In Kulp, 20 hectares of trees were destroyed in a fire that broke out in an area where the PKK operates. Then came news of a series of fires in different parts of Lice.

Metin Bekiroglu, a local journalist, called attention to the possibility of arson, commenting to Al-Monitor that fires breaking out simultaneously in at least 10 locations in two towns could not be coincidental. With the exception of a fire at Duru village, where it quickly spread to trees, the fires were caught before they could spread. In all cases, local teams of responders were the first to intervene, followed by local residents. According to Rezan Zugurli, Lice co-mayor, some 1,200 hectares of trees were destroyed.

Bekiroglu alleged that Forestry Department teams were dispatched only after news of the fires were reported by the media. He said, “The fires couldn’t have been put out without the efforts of the local people. The Forestry Department did not send any reinforcement vehicles. How many vehicles intervened at the Mersin fire? We don’t have 1% of the facilities they have. In 16 provinces, there is not a single aerial fire-fighting vehicle. It is as if they have written off these parts.” Bekiroglu does not think soldiers started the fires.

According to Necdet Ipekyuz, chairman of the Diyarbakir Social and Political Research Institute, the social effects of a wildfire can extend beyond the forest. He told Al-Monitor, “Usually when an incident occurs, in addition to containing it, measures are taken to prevent recurrence. But looking at the Kurdish experience, you will note that many questions are raised about the lack of interest by the news media, complacency of local officials and the simultaneity of fires at Cudi, Kulp and Lice. If you ask the people in the street, they will tell you these are not coincidences, but intentional, and that intervention was totally inadequate. The ecology of the region has already been badly damaged with earlier forest fires that were started to restrict the movements of the guerrillas. With the end of the conflict recently, we were seeing a re-greening of the area. Now they are destroying it once again. We need measures to be taken. The government has to be more visible and work with the people, with its citizens. Otherwise people won’t be persuaded. They will recall the past, which could easily turn into fear, panic, anger and hatred.”

The fires are out, but the people continue to wonder if they will ever see a plane or a helicopter based in their area to combat forest fires.