In the old city of Diyarbakir, a dengbej house was established for the few remaining Kurdish storytellers to gather and try to keep their tradition alive, although younger generations are resorting to pop culture to convey the people’s suffering. 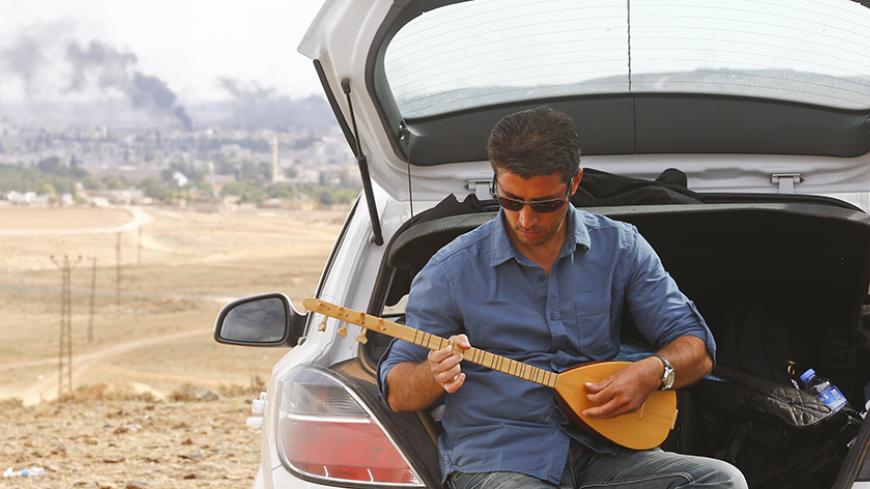 A Turkish Kurd plays the sitar as smoke rises from the Syrian town of Kobani, as seen from the Mursitpinar crossing on the Turkish-Syrian border in Sanliurfa province, Oct. 26, 2014. - REUTERS/Kai Pfaffenbach

DIYARBAKIR, Turkey — Rotating his prayer beads in his hand, Mehmet Ince sings songs of struggle and grief in a small courtyard. A 62-year-old man of tall stature and a short grey beard, he learned the art of storytelling through song from his father 46 years ago. Known as a “dengbej,” he is one of dozens of Kurdish storytellers preserving a fading tradition: performing their songs to recollect the history of their people.

Others like Ince gather in a house established for them by the local municipality in 2007. Located in the old city of Diyarbakir, hundreds of Kurds find solace here in the aftermath of tragedy and persecution.

“We sing stories of love and war,” Ince told Al-Monitor while lighting a cigarette in the house of the dengbej. “We express our history through our tongue.”

Kurds in Turkey have long been denied a history of their own. In 1980, their language was criminalized following a bloody military coup that saw the country fall under martial law, empowering the army to raid, imprison and kill thousands of leftists and Kurdish activists.

Faced with charges of separatism by the state for speaking their mother tongue, dengbejs traveled discreetly between villages to perform for their people. Whenever one would arrive, the town would elect two people to stand the lookout for Turkish soldiers, while the rest of the community would cram into an empty guesthouse to hear him sing.

Since the 1984 birth of the war in between the Turkish government and the Kurdistan Workers Party (PKK), dengbejs have produced an alternative narrative from that of the state, a history of their people’s suffering.

“We used to listen to their cassettes secretly in our village,” said Mehmet Cinar, a resident of Diyarbakir and a frequent visitor to the house.

Although the use of Kurdish was legalized in publishing and recording in 1991, interest in the dengbej was sometimes discouraged by PKK members in their community.

The PKK objects to what it sees as fuedalist practices in Kurdish culture as part of the group's armed struggle against the state. As a socialist group, it did not approve of the dengbejs' part in the Kurds' feudal past.

But the more dengbejs told stories that defied government repression, the more their relationship with the PKK improved.

During the fall 2014 battle for Kobani, where hundreds of Kurds from eastern Turkey helped the PKK defend the persecuted Kurdish community in Syria from the Islamic State, families of Kurdish militants flocked to the dengbej house. Hundreds of new songs were recorded, bringing about a new chapter in Kurdish history.

Tahsin Turk, a 64-year-old dengbej with a thick gray mustache and stained yellow teeth, said that the IS threat has motivated him to produce music in the memory of those who lost their lives in the fighting.

“I have family fighting against IS,” Turk said as he stood up. “We need to produce an honest history for our children.”

There are 30 dengbejs in Diyarbakir, most of whom spend their days in the company of their brethren. And though none receive a salary, many say money is a small sacrifice to comfort their people.

On June 5, a day after a bomb killed three people at a political rally in Diyarbakir, shopkeepers played dengbej songs throughout the city. That day, Ince stood outside the entrance of the dengbej house to console those who came to honor the dead.

“We can’t trust the government’s textbooks,” Cinar told Al-Monitor while smoking a cigarette in the courtyard. “We have to listen to the dengbej to understand our struggle and who we are.”

While the diverse origins of their folklore remain unclear, many dengbej say it was often learned from women who sang in mourning for their loved ones.

But concerns that the next generation will fail to produce its own corps of dengbej bother many in the village. The emergence of pop culture and rapid urbanization have pulled more young people away from the 5,000-year-old tradition.

Mehmet Guli, an official from the pro-Kurdish Peoples' Democratic Party, said that though its office has tried to introduce Kurdish young people to the custom, few, if any, have taken an interest to learn. Instead, those migrating to larger cities prefer to produce Kurdish narratives through contemporary art such as cinema and theater.

“We can’t force them,” Guli told Al-Monitor. “We give a tour of the house to young Kurdish students and remain ready to train those who approach us.”

Today, the dengbej house is a growing tourist attraction, receiving nearly 70,000 visitors each year. But Guli stressed that the government hasn’t done the Kurds any favors, as cultural rights are freedoms they fought for but have still not fully acquired. And while he fears the tradition may soon die, others remain confident that Kurdish folklore will live on for generations.

“As long as one Kurd lives, the dengbej will live as well,” Ince said before cupping his hand behind his ear to listen to the day’s final performance.