Attacks on Chinese escalate in Turkey

Turkish anger over Chinese policies has led to attacks and racist protests. 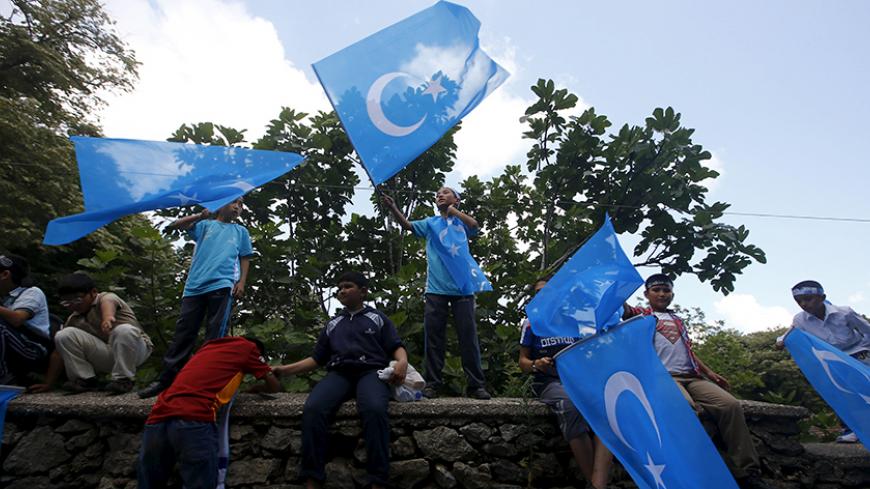 Boys wave East Turkestan flags during a protest against China near the Chinese Consulate in Istanbul, July 5, 2015. - REUTERS/Osman Orsal

On July 1, news broke that a group of five men attacked a Chinese restaurant named Happy China with sticks and stones in the center of Istanbul. The attackers were heard to say, “We do not want a Chinese restaurant here, get out of our town!” The owner, Cihan Yavuz, said in a TV interview, “We are all Turks here; our chef is a Uighur Turk. We serve Muslim East Asian tourists and rarely ever have Chinese customers. We do not serve alcohol. We never received any warnings of an attack. But I see it may not be possible for us to earn a living here.”

On July 4, in the western city of Balikesir, a group protested against China for persecuting Uighur Turks and hung an effigy of late Chinese leader Mao Zedong.

On the same day, a group of ultranationalists attacked a Korean tourist they assumed was Chinese in the popular Istanbul tourist district of Sultanahmet.

To add insult to injury, Devlet Bahceli, chairman of the Nationalist Action Party (MHP), gave an interview to popular journalist Ahmet Hakan on July 8 about the attacks. Bahceli said, “Our nationalist youth is sensitive to injustices in China. They should have the freedom to exercise their democratic rights. These are young kids. They may have been provoked. Plus, how are you going to differentiate between Korean and Chinese? They both have slanted eyes. Does it really matter?” His racist and ignorant statement caused an uproar in the Turkish and international media.

His interviewer tried to excuse Bahceli’s comments as a joke, but when taken together with the banner displayed in multiple locations by the group Idealist Hearths (Ulku Ocaklari) that read, “We crave Chinese blood,” we must question if Bahceli’s statement was taken as a tacit approval of violence in the name of protest among ultranationalist and Islamist youth.

On July 9, Thailand’s honorary consulate in Istanbul was attacked by 200 men affiliated with the East Turkestan Solidarity Group. The violence captured on video is quite telling about the nature of these hate crimes. Men with rocks and thick wooden planks are seen breaking the windows and pounding on the doors while calling “God is Great” and waving East Turkestan flags. Their justification was that Thailand had repatriated Uighurs to China.

Following the growing social pressure, the Idealist Hearths group released an official statement explaining that it had not attacked any tourists. Al-Monitor interviewed 13 young nationalists along with senior MHP members. They all concurred that the MHP views all tourists in the country as their guests. All eschewed the terms racism or fascism and issued press releases along those lines.

However, below this hospitality argument, there was a strong undercurrent of anger. One senior MHP official told Al-Monitor on condition of anonymity, “For years we have been the silent victims of our own leadership trying to silence the nationalist youth. For example, in Ankara University, for years several members of our movement were told not to go to school during final exams, because there might be trouble with the pro-Kurdish groups. They obey and pay the price of not graduating in a timely fashion.”

Firat Kargioglu, a scholar at Firat University in Elazig specializing in nationalism, told Al-Monitor, “When we look at the anti-Chinese protests in Turkey, we see that they may go beyond peaceful protest with racist intonations in their slogans, banners and symbols. This rhetoric easily escalates into violence, tainting the movement.”

Hasan Kocabey, the chairman of a rising nationalist civil society organization called the Turanci Movement Platform, gave a television interview in which he claimed that real nationalists could tell who is of their own blood and that the belittling comments against the movement in the press were the result of media manipulation. He also explained that the discrimination Uighur Turks face is not because they are Muslims, but rather because they are not Chinese. It was a racial issue in his eyes. Kocabey said his group had protested the Chinese restaurant by leaving a baby doll covered in blood on a table but had not committed any violence. He added that nationalists had not attacked a Korean nor any other tourists, but a scuffle between a pro-Kurdish group and the Turkish nationalists had been misrepresented in media.

Not many people in Turkey found these explanations convincing, and these anti-Chinese demonstrations and attacks against Asians had immediate consequences. On July 8, the Chinese Philharmonic Orchestra canceled concerts scheduled for Aug. 16 in Istanbul. On July 13, the Turkish police announced it would provide extra security for an art exhibition titled “Chubby Women” by Chinese artist Xu Hongfei, for fear of attacks.

While many Turks on social media approached the issue from a humorous angle, covert racism can still be traced even in the savviest commentary. Among some of the most popular remarks:

A deep-rooted everyday racism dominates Turkish social media, even among those critical of ultranationalist groups, disguised as concern about other Asian groups. It has been quite interesting to watch as only a few newspaper columnists have bothered to ask why and how random violence on the streets of Turkey is becoming increasingly normal.

Violence against women has skyrocketed and is well documented. Alevis face not only discrimination, but also fear persecution on multiple levels every day, including several recent instances of their houses being marked, all over Turkey.

Kurds have suffered years of discrimination against their cultural and national identity, also well documented. The latest event was the hundreds of attacks on the pro-Kurdish Peoples’ Democratic Party during the June election campaign.

The LGBT community also suffers from a shocking rise in murder rates as well as attacks against its members. A quick review on social media during Ramadan 2015, which coincided with June's LGBT pride month, shows jarring threats against members of the LGBT community. Not only have they faced police brutality in public spaces, but open threats against their freedom of expression go unpunished. It is quite common for post-attack rhetoric to focus on justification for why these events happened, rather than prevention and aid for the victims.

Acts of violence are not limited by ethnicity, gender or religious affiliation in Turkey. For example, health care workers have been seeking police protection at an increasing rate as disgruntled patients and their families brutally attack them.

There is an undeniable pattern of violence in public spaces against those perceived as weak in Turkey. One of the reasons is that the perpetrators get away with it both socially and legally, with a slap on the wrist at most.

Discrimination is so insidious that even victims fail to detect it. Over time, with no proper hate-crime legislation, almost all subcultures are left vulnerable in Turkey. Failing to recognize the pattern and dealing with each case separately helps neither past nor potential future victims.