When children have to provide: Syrian refugees struggle in Jordan

A lack of schools and teachers in Jordan along with hurdles preventing Syrian adults from working have led to Syrian refugee children increasingly working illegally to support their families. 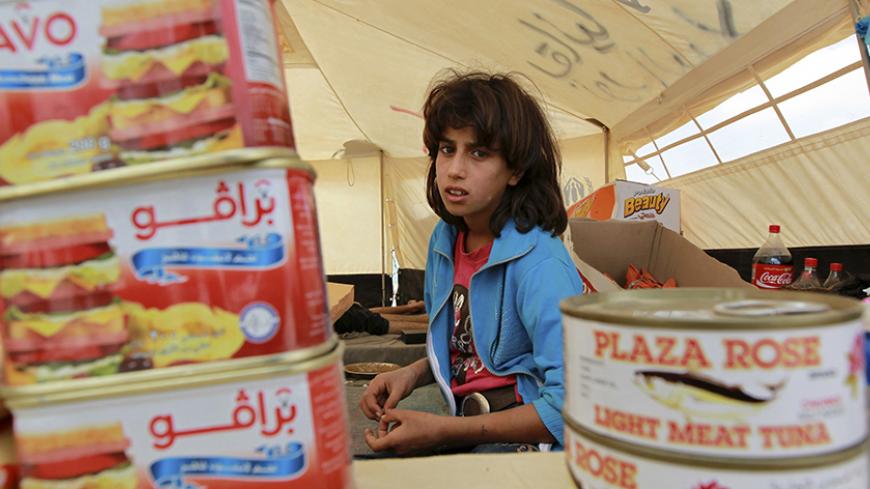 A Syrian refugee child sells canned food and snacks in her small grocery shop in front of her tent at the Zaatari refugee camp, in the Jordanian city of Mafraq, near the border with Syria, Oct. 4, 2012. - REUTERS/Muhammad Hamed

AMMAN, Jordan — Only 13 years old, Mahmoud, a Syrian refugee, works six days a week ironing curtains in Mafraq, Jordan. His family has limited financial means, so Mahmoud and his brother must work to pay for the household’s living expenses. “I would like to go back to school to have a better future. It is very hard,” Mahmoud told Al-Monitor.

Mahmoud remembers when he used to attend school and play with his friends in Syria, but now he is socially isolated, toiling 11 hours a day at work. Although tragic, Mahmoud's story is becoming increasingly common among Syrian refugees in Jordan.

“Small Hands, Heavy Burden,” a report by the United Nations Children’s Fund (UNICEF) and Save the Children, highlights the glaring problem of child labor among the refugees. Nearly half of Syrian refugee families (47%) in Jordan rely on income generated by their children, with a majority of the children laboring six to seven days a week earning between $4 and $7 a day.

One of the main reasons for the child labor crisis is the inability of their parents to legally obtain work. While the Jordanian government says that the refugees are permitted to participate in the labor force, there are numerous bureaucratic hurdles that significantly reduce the number of Syrians actually eligible to work. There are more than 629,000 registered refugees in Jordan.

Muhammad Khan, a UNICEF program officer, told Al-Monitor from his Amman office that only around 4,000 Syrians have obtained work permits. According to Khan, a working adult is probably more visible to authorities, but a child can likely stay below the radar. Many children work in the informal sector, such as agriculture and construction, where it is more difficult for the authorities to catch them.

Given the lack of legal opportunities for adult refugees to work, Helena Rietz, Swedish ambassador to Jordan, told Al-Monitor, “Jordan should find ways of tapping into the economic potential of refugees and create livelihood opportunities.” Rietz also called for increased international funding to support increasing educational opportunities for Syrian refugee children in Jordan.

One of the most controversial practices by the Jordanian government is an enforcement mechanism that UNICEF considers “forced separations.” Since January, UNICEF has recorded more than 130 cases of police finding Syrian refugee children working without proper documentation. Instead of returning them to their families in Amman, however, the police send them to the Azraq refugee camp, 62 miles from the capital. The Ministry of Social Development declined Al-Monitor’s request for comment on this issue.

Al-Monitor spoke with a few parents of Syrian refugee children who are working more than 10 hours a day to support their families. Fearful of upsetting local authorities, they insisted on the use of pseudonyms. The father of children aged 14 and 17, both of whom work, said, “In Syria, the dad provided everything. He was permanently employed while providing a continuous income for school and housing. Here in Jordan, it is the opposite, with the children providing and paying for everything.” The father said that he cannot work without obtaining the necessary documentation from the Jordanian government, but that doing so is a nearly impossible task.

In addition to the financial uncertainties refugee families face, access to education also poses a barrier, pushing many Syrian children into the labor market. “The top reason for Syrian refugee families to not send their children to school in host communities is the lack of educational facilities,” Khan said. “Approximately 90,000 Syrian refugee children are not enrolled in schools.”

According to Khan, there are simply not enough classrooms or teachers to meet the high demand. He said the Jordanian government needs additional funding from the international community to support an expansion of the educational system. “If all the students tomorrow wake up and want to go to school, there are no spaces in the classrooms,” said Khan.

Transportation to school is also a problem, explained Insaf Nizam, chief technical officer at the International Labor Organization based in Amman. Nizam told Al-Monitor, “In qualitative interviews, many Syrian parents say that they pulled their children out of elementary school because either the children themselves or the families are fearful that they will be harassed or ‘attacked’ on the way to school.” Bullying and violence against Syrian refugee children also occur on school grounds, with Jordanian children often waiting for the Syrian children to arrive, said Nizam.

On July 1, the UN World Food Programme announced cuts in its assistance to Syrian refugees in Jordanian host communities because of a lack of funding. Its regional refugee program is 81% underfunded. Such reductions by international donors make it even more challenging for Syrian refugee families to support themselves.

Khaled, 15, works 12 hours a day cleaning cars in Amman. His mother explained how difficult it is to see the child she calls the “light of my eyes” suffering from miserable treatment. Umm Khaled was especially sad for her son because he had once “loved school” and excelled in his studies. Now, she said, ”He comes home and cries, so I tell him not to return to work, but he knows we need money, so he goes back.”