Amid ongoing disputes between Fatah and Hamas, the fate of a new government still hangs in the balance. 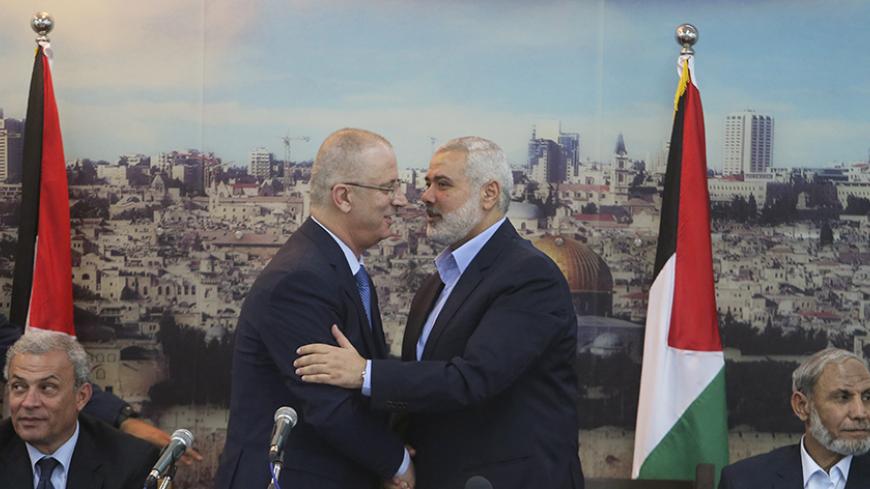 RAMALLAH, West Bank — Consultations over the new government formation have revealed the depth of the crisis and division between the Fatah and Hamas movements. As Palestinian President Mahmoud Abbas tasked Fatah Central Committee member Azzam al-Ahmad on June 23 with communicating and consulting with the Palestinian factions to form a government, controversial issues that all parties had previously tried to overcome have resurfaced. While Ahmad accused Hamas of causing the consultations and potential consensus to fail, Hamas spokesman Sami Abu Zahri replied that “Fatah seeks to tailor the government as per its own preferences.”

After failing to reach common ground, Abbas tasked Prime Minister Rami Hamdallah in July with bringing about minor changes to his government instead of forming a new government. This has angered Hamas, which considered it a coup against the reconciliation, Zahri said.

Hamas had initially agreed in July to take part in the government, yet it is now imposing conditions. Most important are those mentioned in its June 26 statement, namely “calling on the temporary leadership body [of the PLO] to follow up on all reconciliation issues, [limiting] the government that will be formed to [carry out] tasks, without a political program, the government winning the Palestinian Legislative Council’s trust before it embarks on its tasks, and reaching a solution to the [Hamas-appointed] employee problem immediately and without preconditions.”

Hassan Khreisheh, a member of the Legislative Council that has been obstructed as a result of the Fatah-Hamas division in 2007, said, “The dispute is political and is not on the government structure or tasks, as rumored.” He added, “There is a lack of trust between the parties, which is the basis of this conflict.”

Khreisheh confirmed to Al-Monitor that it is a fabricated crisis against the backdrop of a settling of scores between the president and those surrounding him who seek a change in the premiership on one hand and an attempt by Hamas to gain time on the other hand.

Khreisheh considered that all parties should bear responsibility. “Every party is sending the ball to the other party’s court. The president was mistaken when he left the door ajar to the government. So far, the latter has not resigned. In return, Hamas is demanding that the PLO’s temporary leadership body be called to form a government at a time when it [Hamas] is well aware that, according to the law, the president has the right to task someone [with forming] the government,” said Khreisheh.

Khreisheh expected Hamas to back away from its decision and agree to take part in the government in the near future. He noted that the solution is in the president’s hands through the elections and by paving the way for those who want to participate; otherwise, the Palestinian street will remain hostage to the conflict between the two parties.

Bassam al-Salhi, secretary-general of the Palestinian People’s Party (PPP), deplored Hamas’ statement and conditions to be part of government. He said that all issues were agreed upon at an earlier stage, and Hamas is aware that political and regional circumstances will not tolerate the debate being reopened.

Based on these positions, it seems that there is a quasi consensus to reach a solution to the crisis through the formation of a national unity government rather than through a consensus.

Salhi told Al-Monitor, “We have offered all parties an initiative focusing on moving forward with the reconciliation based on the April 2014 Beach Refugee Camp Agreement between both parties and turning the national consensus government into a national unity one, which will provide it with additional power to overcome the existing obstacles.”

The PPP’s initiative was introduced July 28 to all factions, who expressed their approval — with the exception of Hamas. Salhi said, “We are still waiting for Hamas’ [response]. We have received preliminary approval from Fatah. The rest of the factions have welcomed it.”

Islamic Jihad spokesman Khaled al-Batsh called July 1 via his Facebook page for a national unity government and real consultations toward forming it, instead of looking for formulas that will not provide alternatives to overcoming the difficulties that hinder the national partnership, which is required for the liberation of and return to Palestine.

Mustafa Barghouti, secretary-general of the Palestinian National Initiative, said in a statement that was sent to the press by email that “the only way out of the Palestinian political division is the formation of a strong national unity government and the implementation of all articles of the April 2014 agreement.”

So why don’t they go ahead with this solution that they agreed upon? Khalil Shaheen, director of research at the Palestinian Center for Policy Research and Strategic Studies, told Al-Monitor, “The parties are being selective in the implementation of the reconciliation agreement.” He added, “Both the president and Hamas are being selective based on their interests.”

Shaheen said that Hamas was obstructing the government’s work and pushing for what serves its interests only, which was clear through its insistence on the Hamas-appointed employee crisis.

He added that the solution “consists of going back to a comprehensive national dialogue where all of the issues, which have been agreed upon and have not been implemented, are discussed again. More important is to develop clear and binding mechanisms for the implementation of [any reached] agreement, including the formation of a national consensus government.”

On the possible formation of a national unity government, Shaheen said that it could be the solution. If it is the case, each party should be ready to overcome all obstacles and abandon its intransigent positions.

“Yet the problem is that this proposal was only a maneuver, not a serious proposal; otherwise, the president and the other factions who called for a national unity government would have started the consultations with Hamas already,” said Shaheen.