A senior Hamas source claims that rumors about negotiations with Israel for a long-term truce are exaggerated, saying that the only issue seriously on the table is an exchange of Hamas prisoners and the bodies of two IDF soldiers. 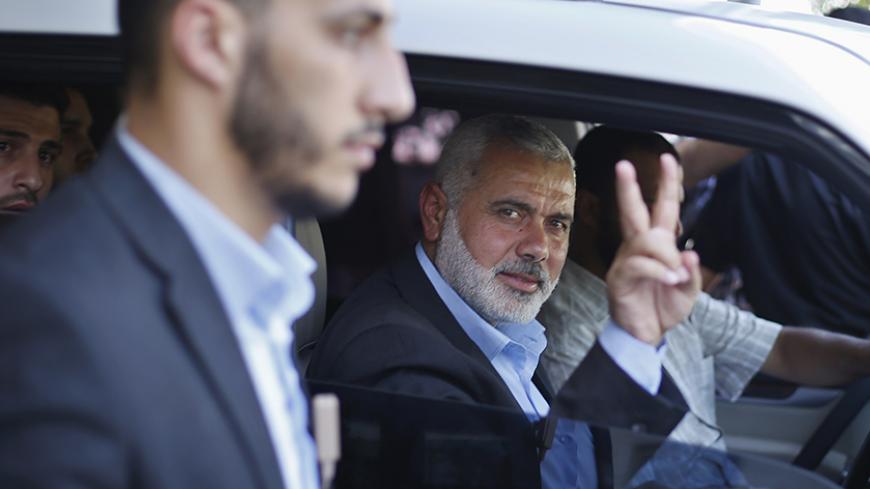 For quite some time now, reports have been circulating in the media about communication between Israel and Hamas toward "hudna" — a long-term truce between the parties. In an Al-Monitor article June 30, Uri Savir reported that a source in the prime minister's office confirmed to him that there had been an exchange of messages between Israel and Hamas; however, as the source noted, the parties are still too far apart.

The messages, the deliberate leaks and, above all, the hopes of Gaza residents for a change and an improvement in their own situation and in the overall state of the Gaza Strip have triggered a wave of rumors that a historic agreement between Israel and Hamas is not only possible, but also closer than ever. And anyone looking for confirmation and corroboration could find them in the statements made July 4 by former Hamas Prime Minister Ismail Haniyeh.

"This authority [Israel] has decided against launching another war,” Haniyeh said, explaining that the message had been conveyed by a third party whose identity he chose not to disclose. The statements he went on to make in the sermon he delivered at al-Shuhada Mosque in Nuseirat refugee camp have actually reinforced the rumors. They were perceived by his listeners as a first public acknowledgment designed to lay the groundwork for an imminent agreement with Israel.

“Last Ramadan [during Operation Protective Edge] planted the seeds that are blooming during Ramadan today. Liberation is close. The next step will bring plenty to the families of Gaza,” Haniyeh promised.

"I have no idea why he said what he said," a senior Gaza Hamas official who requested anonymity told Al-Monitor. "There is no agreement in the offing, and there are no contacts whatsoever on an agreement. Those talking of an agreement are basing their words on initiatives taken by some European figures. Those initiatives never materialized to anything beyond proposals. We, for our part, have presented our views and demands, but we haven't heard anything [from Israel] since. Well, would you call it contacts?" he asked.

A year ago today, Israel launched Operation Protective Edge on Gaza. Hamas never denied, once it ended, that it was interested in implementing the cease-fire understandings reached in Cairo on Aug. 26, and that it sought to discuss, as part of those understandings, the lifting of the Gaza blockade and the establishment of a seaport and an airport.

In all the understandings and provisions of the cease-fire agreement mediated by Egypt, Palestinian Authority President Mahmoud Abbas has been given a key role. Without him, there is virtually no chance of rehabilitating the Gaza Strip. In fact, the senior Gaza Hamas official blames the Palestinian Authority and its leader for deliberately thwarting the rehabilitation of Gaza, and of "outrageously" hurting its residents, who are yearning for a change.

"They claim that we seek to establish a state in Gaza," he said. "I told PA seniors, 'What are you talking about?' Had we sought to establish a state, we would have done so when we had an elected government and a Hamas prime minister at the helm. We are interested in unity. It's only in unity that we will be able to join forces and make it easier for our citizens. Gaza is in dire straits."

The tension between Hamas and Fatah has escalated this week, culminating in a point reminiscent of the days on the eve of the 2007 military coup in Gaza, which led to the split between the Gaza Strip and the West Bank, and to the establishment of a Fatah government in the West Bank and a Hamas government in Gaza.

The recent tension stems from the growing concern among top-ranking Palestinian Authority officials that some secret arrangement between Israel and Hamas is in the making behind their backs. What's more, they are worried that it is liable to undermine the Palestinian Authority moves to enlist international support for the establishment of a Palestinian state. Such concerns were openly voiced by Abbas in an interview with Al Arabiya TV in June.

"Israel would like [Hamas] to have its own country, and that we [Palestinian Authority] be an apartheid state or self-governed," Abbas said. He noted that Hamas, for its part, was working to establish a state that would rely on aid from Egypt.

Yet, regardless of these hard-hitting statements, a top-ranking security source in the authority, speaking on condition of anonymity, said all the talk about contacts and understandings between Hamas and Israel is just a lot of hot air — empty chatter, as he put it. He said that Israel seeks to employ a divide-and-conquer strategy, while Hamas wants to ensure its control over Gaza. "So what sort of understandings can they possibly reach? Only Allah knows …"

Despite the denials and the extremely wide gaps between Hamas and Israel, something is happening on the ground. The senior Gaza Hamas official acknowledged that the regulations at the Beit Hanoun, or Erez, border crossing have been significantly eased and that goods are regularly transferred. However, he says that this is unrelated to the understandings directly or indirectly reached with Israel.

Considering that Prime Minister Benjamin Netanyahu deems Hamas a terrorist organization, and given that official Israel is pointing the finger at Hamas, charging that it collaborates with jihadi groups in the Sinai Peninsula, it is rather doubtful whether there can be any understandings between the parties. It is also uncertain whether the Israeli demands — the demilitarization of the Gaza Strip and the destruction of the tunnels, posed as a prerequisite for lifting the blockade — would be acceptable to Hamas. After all, the acceptance of the Israeli demands by Hamas would most likely be regarded as an admission of defeat.

Thus, in view of the efforts by European officials to facilitate communication between Israel and Hamas — with the critical humanitarian situation in Gaza in mind — Israel would prefer taking unilateral steps. That way, nothing is on paper, and Israel is not committing itself to anything.

These steps are designed not only to ease the blockade on Gaza, but also to deliver a concrete message to Hamas: If you conduct yourself properly, if you take the initiative and stop the rocket launchers, whatever the organization they are associated with in Gaza, it will be for your own good.

The messages exchanged, including the message that Israel is not planning a military assault on Gaza in response to the recent rocket attack, as revealed by Haniyeh on July 4, are simultaneously conveyed to a third party — the European representatives. The series of facilitation measures, including the transfer of goods through the northern Gaza border crossings, have been unilaterally taken, along with Israel's commitment to take even more positive steps provided Hamas shows that it is in control of the area and conducts itself properly.

There is only a single issue regarding which Hamas is willing to concede that some progress has been made in the contacts: "prisoner-of-war exchange," as the organization terms it. As part of the emerging deal, Israel should release toward the end of the Ramadan fast, in less than 10 days, several dozen Palestinian prisoners, and in exchange Hamas is to hand over the remains of the two fallen Israeli soldiers, Hadar Goldin and Oren Shaul, killed in Operation Protective Edge.