Is Maliki making a comeback?

Former Iraqi Prime Minister Nouri al-Maliki is being criticized for sowing sectarianism and using animosity among various Iraqi factions as a way to find a way back to power. 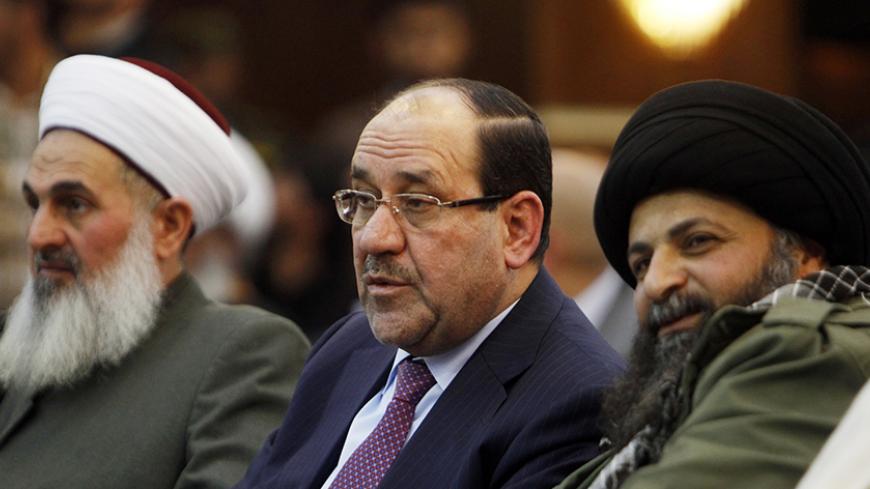 Nouri al-Maliki (C) speaks at a ceremony honoring fighters of the group who died during their struggle against the Islamic State, in Baghdad, Feb. 21, 2015. - REUTERS/Ahmed Saad

While serving his second term as prime minister in February 2011, former Prime Minister Nouri al-Maliki told AFP he did not aspire to serve a third term. He averred that “the premier who has a program, and is efficient, does not need more than eight years to effectively implement it. If this is not the case, why, then, give him more than eight years?”

Contrary to what he said, Maliki was clinging to an extension by the end of his second term in September 2014 and only gave up after his supporters abandoned him.

During his rule, Maliki’s policy was characterized by its sectarian and divisive tone and was a key reason behind the recent military defeats in Mosul and Ramadi. Now Maliki is urging people to back away from the national reconciliation policy initiated by Prime Minister Haider al-Abadi when he took office. Proof of this is that during a tribal gathering June 13 in Karbala, Maliki said that the Anbar province’s tribes were protesting against him. He accused the rival political parties of supporting the objections against his rule when he was prime minister, which he called illegal. Finally, he described the fall of the Sunni areas at the hands of the Islamic State (IS) as “a Sunni sectarian revolution against the Shiites.”

In his speech, Maliki used three forms of extremist thought to incite to sectarian conflict. First, regional division, by generalizing and accusing the tribes of a particular area of being all against the Iraqi government; second, deepening the political dispute by accusing his rivals of standing with the terrorists; and third, describing the dispute in Iraq as religious and sectarian.

All three points contradict reality. There were tribes — such as the Sunni Albo tribe — in Anbar that were always against the protests and the ensuing developments, and the opposition parties to Maliki called for the peaceful resolution of the sit-ins and did not back those up. Finally, the Sunnis who were killed and displaced by IS exceed those from other communities; therefore, what happened cannot be described as a Sunni revolution against the Shiites.

In another speech, on the anniversary of the Popular Mobilization Units June 13, Maliki seemed to have a strong belief in the conspiracy theory that the fall of Mosul at the hands of IS was brought about by internal parties — such as the Kurds and the Mosul Provincial Council — to overthrow his government. He clearly said that the denial of the conspiracy is a conspiracy in itself.

Before that, in a TV interview June 7, Maliki criticized the opposition to his third term.

Maliki's recent statements raised different reactions in the Iraqi street. His supporters welcomed his thoughts and the idea of sectarian division in Iraq. But many of the Iraqi elites have criticized his remarks and considered them divisive and contrary to the reality.

In another context, Maliki introduced himself as a champion of the idea of ​​founding the Popular Mobilization Units and their spiritual leader on several occasions, most notably in his interview with Afak satellite TV channel on March 15: “I am the one who established the Popular Mobilization Units, and their establishment is a strategy that I have been speaking of for a long time. When the events took place [in reference to the emergence of IS], I addressed the Iraqi people and called on them to join the military forces.”

This is while the Shiite forces, known as the Popular Mobilization Units, were founded following a fatwa issued by Grand Ayatollah Ali al-Sistani, which called on all segments of the Iraqi society to join the legal security forces under the Iraqi government’s supervision.

This logic points to the Iranian ambition to equate the Popular Mobilization Units to the Iranian Revolutionary Guard Corps, particularly assuming a prominent political role that is being clearly seen in the elections, and the country’s major political events and developments.

There seems to be an attempt backed by Iran to bring Maliki back to power or to cling to him as an influential and decisive element on the political arena who uses the Popular Mobilization Units as a steppingstone to power. Maliki’s repeated appearances with the Popular Mobilization Units’ commanders, who are known for being associated with Iran, reinforce this suggestion.

Religious authorities and leaders in Najaf have firmly opposed foreign political interference in Iraq. They have repeatedly called for Iraq’s political independence, a comprehensive national administration and legal procedures far removed from the military authority and militias.

Senior cleric Jawad al-Khoei told al-Baghdadia TV on June 18 that the Shiite seminary (hawza) in Najaf is against all forms of quotas and sectarianism, highly criticized the correlation between the ruling political parties and foreign parties, and is against engaging in other countries’ political agendas, which is a phenomenon that prevails over the ruling political class.