Iran reform must start at home

A nuclear deal may strengthen the position of those in Iran who believe that better relations with the West can improve, not weaken, Iran's influence in the region. 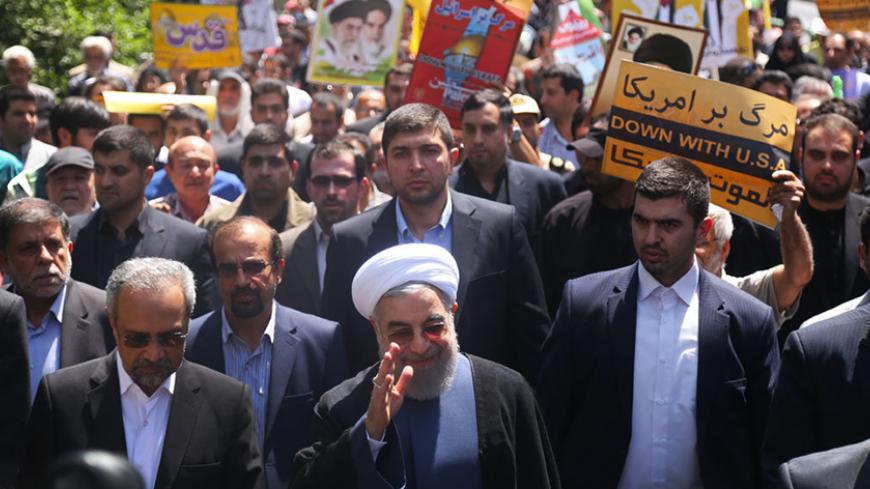 The prospect of a nuclear deal owes a lot to initial confidence-building measures toward the United States inside Iran and, as Iran's Deputy Foreign Minister Hossein-Amir Abdollahian put it in a July 6 CNN interview, the “positive impression” the United States left in the recent nuclear talks. Any meaningful cooperation between Iran and the United States on regional issues also requires a change in Iran’s domestic politics toward US goals in the region.

The prevailing view in the United States is that the strength of Iran’s regional policy is mainly based on forming coalitions with friendly parties such as Hezbollah, Hamas and Shiite factions in Iraq and Yemen. While these coalitions are perceived as advantageous to Iran’s regional policy, one should not ignore that following a policy of actively preserving Iran’s national interests and security in regional issues is supported by all of Iran’s domestic political forces.

Foreign Minister Mohammad Javad Zarif maintains the necessity of establishing stability and security, and of combating terrorism and extremism in the wider Persian Gulf region. Indeed, preserving Iran’s geopolitical and ideological interests in Iraq, Syria and Yemen is a constant in Iran’s foreign policy, holding the support of both policymakers and the Iranian public.

Yet, in the course of recent years, the United States and its main regional allies such as Saudi Arabia and Israel have followed a policy of minimizing Iran’s role and influence in the region. For instance, Iran has not been invited to the Geneva peace conferences regarding Syria because it is considered a contributor to the crisis in the country. Saudi Arabia has justified its attacks in Yemen by claiming it is containing Iran’s regional power. No doubt, attempts to reduce the volume of Iran’s nuclear activity are intended to contain Iran’s increasing regional role.

In this respect, one US view is that the lifting of sanctions and subsequent Iranian access to $100 billion in blocked money will make the country a more assertive actor on regional issues, as most likely a large portion of the money would go to friendly factions such as Hezbollah, at the expense of regional peace and security and US and its allies’ interests.

This policy has created political debate within Iran over US goals in the region, acting to the detriment of Iran’s national interests and security. Most of Iran’s regional moves have been reactions to aggressive US policies aimed, beyond regime change, at isolating Iran.

Despite all of this, Iran is not necessarily in favor of checking the United States' or Saudi Arabia’s power in Syria, Iraq or Yemen, as that would strengthen Iran’s rivals to the detriment of Iran's regional role. Iran’s strategy is not to stand between the region and the West. One traditional view in Iran holds that increased relations with the West will add to its strength in the region, leading major regional actors such as Saudi Arabia, Egypt and Turkey to seek closer relations with Iran. Advocates of globalization and technocrats such as President Hassan Rouhani's Chief of Staff, Mohammad Nahavandian, and Oil Minister Bijan Zangeneh subscribe to this view. In fact, Rouhani said in his presidential campaign that we should first see the "village chief" and then improve our relations with the rest of the world.

Another view holds that Iran’s increased strength in the region through establishing political coalitions with friendly regional states and political factions will add to Iran’s strategic value, leading Western countries to seek partnership and cooperation with Iran in handling regional issues. Advocates of a regionalist approach in Iran’s foreign policy take this view. This trend is strong in Iran’s Supreme National Security Council (SNSC) and parliament, as evident in the positions of parliament Speaker Ali Larijani, Mohsen Rezaeei and SNSC Secretary Ali Shamkhani.

Influenced by its domestic politics and political culture, the reality is that Iran seeks an independent regional policy based on Iranian "exceptionalism" that will focus on its regional historical-identical commonalities and the necessity of playing its appropriate role, commensurate with its sources of power in the region, and the need for interaction with the West and especially the United States in a cooperative context.

From Iran’s perspective, given their diverse geographic and historical situations and identities, the nature of the current regional issues differ from one state to another. In this context, Iran seeks regional solutions for regional issues in which it can play its unique role. This policy, sometimes called Iran’s “expansionist” regional policy in some Western and Arab communities, doesn’t necessarily mean that Iran is working to weaken other actors’ roles in its favor.

A constant question in the West is whether Iran’s regional policy will change after a nuclear deal, but the query ignores the realities and expectations of Iran’s domestic politics. Seeking political solutions in the context of establishing inclusive governments in the region, the main pillar of Iran’s regional strategy, has Iranian domestic support. In fact, battling the Islamic State and Jabhat al-Nusra terrorists in Iraq and Syria, helping the Iraqi government keep its state intact, and Iran’s patience and responsible attitude toward the Yemeni crisis are all legitimate in Iran's domestic politics.