Veteran US diplomat: After Iran deal, focus on Syria

US diplomat James Dobbins shared his thoughts on what is next for the US and Iran, and what the recent agreement means for further collaboration in the region. 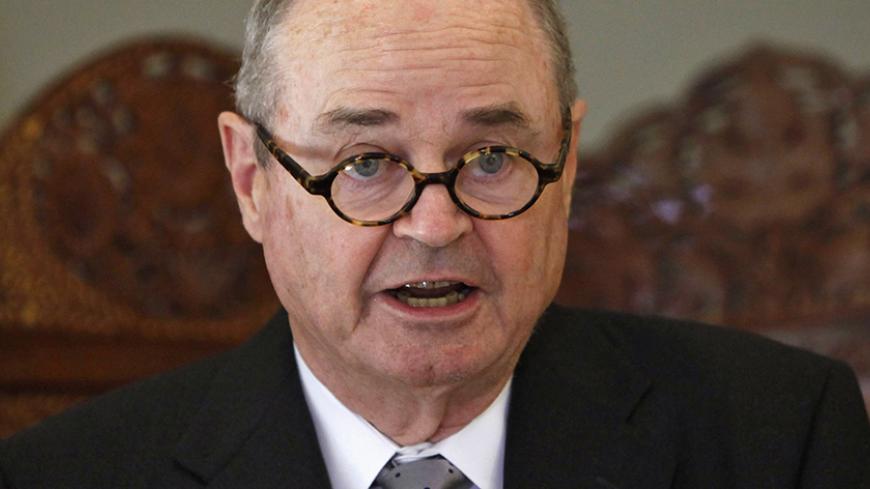 US Special Representative to Afghanistan and Pakistan James Dobbins speaks during a news conference in New Delhi, June 27, 2013. - REUTERS/Mansi Thapliyal

ISTANBUL — In an exclusive interview with Al-Monitor on the afternoon of July 21, veteran US diplomat James Dobbins spoke about whether — and where — Iran and the United States can work together on regional issues. Ambassador Dobbins was the US point man in one of the most successful instances of Iranian-American cooperation in the 21st century. At the 2001 Bonn Conference, he worked closely with current Iranian Foreign Minister Mohammad Javad Zarif and other major players to lay the foundations of a new Afghan government after the overthrow of the Taliban.

An edited transcript follows below:

Al-Monitor:  Where do grounds today exist for regional cooperation between Iran and the United States?

Dobbins:  Clearly, it is easiest with respect to Afghanistan, where US and Iranian interests are largely aligned … and where they’ve pursued comparable policies for the past 12 years, with a certain degree of actual coordination on occasion, and certainly a lot of parallelism and some intercommunication. So, moving from parallel policies to actual collaboration is not a big leap. It won’t be unpopular in Afghanistan. And it shouldn’t be that controversial in Tehran or Washington.

Al-Monitor:  How would you define these interests?

Dobbins:  I think Iran has an interest in protecting the [Afghan Shiite] minority. So, Iran actually supports a secular, democratic Afghan regime that protects minority rights. And secondly, it has been historically hostile to the Taliban, and certainly to al-Qaeda and the Islamic State, which threaten the democratic, secular order, and [in this respect], Iran and the US are on the same side. Iran collaborated with the United States in 2001 in bringing about a representative [Afghan] government that had the consent of all non-Taliban elements of the government, and it has continued support for Kabul in its aid programs and in its general comportment. On the other hand, since Iranian and US policies are already convergent, there is not that much to be gained for either side [through collaboration]. Rather, it is just a little easier, because Iran and the US are already doing largely the same thing.

Al-Monitor:  Is this why collaboration in Afghanistan has been absent in recent years?

Dobbins:  I think both sides made a choice during the nuclear negotiations not to complicate their domestic situation by appearing to presume that the relationship was better than it was. I think this was probably felt even more strongly in Tehran than in Washington; that any appearance of collaboration, even in an area like Afghanistan, would simply incite domestic opposition to the larger process, which was resolving the nuclear issue. So I think there was a tactical decision [to avoid collaboration on Afghanistan], driven by domestic politics in large measure.

Al-Monitor:  How has the nuclear deal changed things?

Dobbins:  I think that once the deal is on its way to implementation, once it has gone through the [Supreme] National Security in Iran and the Congress in the United States, [and] people are on firmer ground, it is possible that we’ll see more overt forms of … communication, in Afghanistan — to start with.

Al-Monitor:  What else could be on the table, in terms of regional cooperation?

Dobbins:  I think Iraq is the next logical place, because Iran and the US are in effect unstated allies in the fight against the Islamic State. On the other hand, their interests aren’t as well aligned. I think Iran’s interest in assuring its continued influence within the [Shiite] majority sometimes may lead it to ally itself with more radical [Shiite] factions; and Iran was certainly complicit in a number of attacks against the United States, before 2011. But I think the situation is somewhat different now. More than what Iran has shown itself willing to accept, the US would like to see an Iraq which protects and provides a larger role for its minorities, and particularly its Sunni minority. But, we’ll see. Iran apparently collaborated, or at least was working in parallel, with the US on the shift of government from [Nouri al-] Maliki to the current regime, and maybe that was a signal, or recognition, that in order to hold Iraq together, there needs to be some accommodation with more moderate Sunni elements, and that the [Shiite] majority needs to be incentivized to do that. I think another difference between Afghanistan and Iraq is that the Iranian Foreign Ministry is the lead agency in Afghanistan … while in Iraq, it is clearly the [Islamic Revolutionary Guards Corps'] Quds Force. So, collaboration in Iraq implies collaboration between [US] Central Command and the Quds Force. That’s a bigger leap in terms of institutional biases and a more sensitive bridge to cross than simply having the two Foreign Ministries talk to each other. So I think that’s another reason why overt cooperation in Iraq will be a little harder.

On the other hand, there is a logic to it; there is effective collaboration between the American and Iranian militaries, conducted via the Iraqi government, and so, moving to more overt and frequent communication, maybe with the Iraqis continuing to play a role in facilitating that, is possible. Maybe it is that the three of them can sit down together occasionally, and make it a quicker form of communication. My guess is this will be done quietly, and ideally without calling much attention to it. I’m not sure how quickly it can occur.

Al-Monitor:  To clarify, are you saying that regional cooperation can be initiated after the nuclear deal review processes, and thus, before the so-called implementation date?

Dobbins:  It depends on what you mean by cooperation. I can see the American and Iranian ambassadors in Kabul having lunch together six or eight weeks from now. Do I see [Quds Force chief, Maj. Gen. Qasem] Soleimani sitting down with Gen. [Lloyd] Austin in two months? No, probably not. I think that is a more distant prospect, if ever. And then, of course, you get to even more difficult areas, like Syria or Yemen. I would imagine that there have already been discussions between [Secretary of State John] Kerry and Zarif on those issues, in the context of their larger discussions. Whether that will lead to something, I think we will need to see.

Al-Monitor:  Can anything be done on Syria?

Dobbins:  I think the US would like to see some kind of multilateral process launched that could bring peace in Syria … though my guess is that they’re not going to move on this at the present; it requires not just Russian cooperation, and [President Barack] Obama has already talked about that possibility, but also Iran, Saudi Arabia and others.

I think one of the reasons why Iran wasn’t included last time was because of objections from Syrian groups, but Washington wasn’t a champion of including Iran at that time. It might have been willing to do it if everyone else wanted it, but there was in fact enough opposition, so the United States didn’t advocate it. I would think that if there was a new effort with respect to Syria that involved other parties — Saudi Arabia, Turkey and Russia — that the United States would advocate that Iran also be included.

When I say that Syria is a harder and more difficult task, I don’t necessarily mean that it should wait, because in many ways it is the most important of all of them. The Syrian civil war is in many ways the core of the instability in the region as a whole; it is the magnet that is drawing extremists from all over the Muslim world … they are not flooding into Iraq or Yemen or Afghanistan, but Syria, and so if that conflict can be somehow toned down, it will be the biggest single step toward stabilizing the region, and so in many ways, it is the most urgent. And the real question is how quickly can consensus be formed around that, and whether some countries — not the United States, but Saudi Arabia for instance — are willing to sit down with Iran, Russia and others or whether, they basically decide to fight it out a bit more to see whether they can gain ground on the battlefield.