Rape of young girl in Iran met with muted response

The incident is raising questions of a double standard media censorship in Iran. 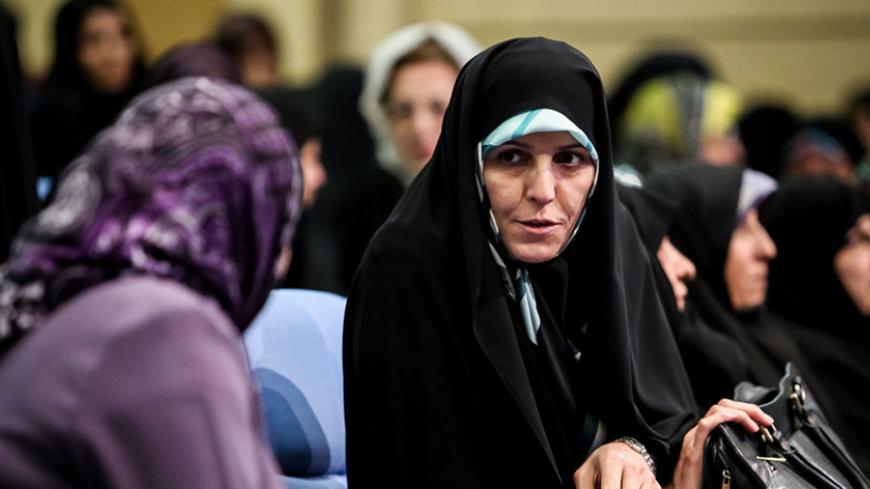 Shahindokht Molaverdi, Iran’s vice president for women and family affairs, talks to a woman at a meeting of women and family activists, hosted by President Hassan Rouhani for iftar on Sunday, in Tehran, July 13, 2015. - Mehr News Agency/Hossein Razaghnejad

In late June, the Reformist Iranian paper Ghanoon reported an eyewitness account of a gang rape of an 11-year-old girl under a bridge in Tehran. Due to pressure from judicial officials, news outlets have not been able to follow up on the case and the crime was unfortunately largely overshadowed by the nuclear negotiations between Iran and world powers. Nevertheless, this tragic incident once again brought the issue of violence against women to the Iranian public’s attention.

Shahrzad Baba-Alipour, a journalist covering social issues for Ghanoon, interviewed a witness to this rape in a June story titled “I can’t say what I’ve seen.” News of the atrocious incident quickly circulated on Iranian social media, prompting several members of parliament to react. However, law enforcement authorities have up until now stayed silent about this crime.

A number of conservative members of parliament have expressed their sorrow about this crime and promised to follow up on it. “It is not a simple matter,” Rasool Hazari, a member of the parliament’s Committee on Public Health, told the news site Tabnak. “In a country that prides itself on being Islamic and following authentic Islamic culture, we cannot so simply look past this crime.”

Similarly, Javad Jahangirzadeh, a member of the parliament’s National Security Committee, characterized this incident as a “heinous event” and called for it to be dealt with seriously. “The authorities have to be responsive about this case,” Jahangirzadeh said, “I promise I will follow up on it.”

Members of the Rouhani administration have also commented on this crime, lending further credibility to the accuracy of Ghanoon’s story. Shahindokht Molaverdi, Iran’s vice president for women and family affairs, wrote a status on her Facebook page in which she accused the ultra-conservative Ansar-e Hezbollah of having double standards for opposing the presence of women at the recent volleyball world championship games in Tehran, which they claim would violate the “purity” of women, while at the same time keeping silent about this crime.

With one month having passed since news of this incident broke, there has yet to be any official report published about this case by local judicial officials, the police or other authorities.

Consequently, Reformist papers have largely given up on this story; even Ghanoon, which first reported on it, has decided not to pursue it any longer. Nemat Ahmady, an acclaimed lawyer and Reformist writer, criticized the conduct of the press in covering the story in a recent interview with the Entekhab news site. “It has to be asked of us reporters. Why has our society become so indifferent? Why hasn’t the picture of this girl been published on the front pages of newspapers? Why hasn’t there been any news about the alleged rapists?”

It appears as though some of the scant coverage of the case is in part due to pressure on the press from judicial officials. “Publications were unofficially asked to not inflame this issue,” a Reformist journalist told Al-Monitor on condition of anonymity. “If this was not the case, many journalists were prepared to further investigate this incident.”

The way in which Iranian authorities have reacted to this case and the indirect pressure they have placed on news outlets to not cover it signals that the Iranian government is still not prepared to seriously confront the issue of rape and violence against women in Iranian society. It further demonstrates that the authorities are not ready to allow civil society organizations or news publications to independently discuss this issue.

Mehrangiz Kar, a lawyer and prominent women’s rights activist, told Al-Monitor that in her 22-year career in Iran working on these issues, she has reached the conclusion that violence against women in Iran is a pervasive phenomenon, even among the more educated class; but, she said, “I cannot claim that men in Iran are more prone to physical violence than men elsewhere.” Kar added, “Where Iran stands out, even from many other Muslim-majority countries, is in its laws with respect to women.”

In Iran, there are complicated laws that make it very difficult for women to prove they have been raped and in some cases these laws can lead to rape victims being punished.

Kar said, “In Iran’s courts there are many factors that influence a judge’s decision in a rape case. If a women had gone to the house or place of work of a man and was raped there, or if a woman accepts to live with a man and is raped by him, the court would not consider these as rape cases. The courts would claim that such incidents were consensual because there should be no reason for a woman to be in the residence of a man who is a stranger.”

Kar added that this reality leads not only to a woman’s rape claim often being dismissed, but in some cases for the woman to be charged with having admitted to having sexual relations and hence committing adultery, leading to her potentially being punished.

This is most likely one reason why many women in Iran prefer to not report being raped to the police. Therefore, it is impossible to get accurate figures on rape in Iran. Four years ago, Iran’s police chief Morteza Ahmadi-Moghadam said there had been 900 officially recorded cases of rape in Iran in the year 2011 (1390 in the Persian calendar).

Ali Akbar Mahdi, a professor of sociology at California State University at Northridge, emphasized in an interview with Al-Monitor that such official reports on rape offer few details. “It is not clear from these reported incidents where these rapes occurred, what age were the victims or what kind of rape had occurred,” Mahdi said.

Given these circumstances, one of the few mechanisms available to alleviate the issue of violence and rape against women are nongovernmental organizations focused on women’s rights. Mahdi added, “Without a doubt, if there is progress made in decreasing rape this would first and foremost be due to the increased awareness of women in confronting this issue.”

In Iran, however, pursuing this type of organized activity for women’s rights carries risks for activists. Many outspoken proponents of women’s rights, including Kar, have been imprisoned for trying to create independent organizations championing women’s rights. Nevertheless, Mahdi believes that to effectively reduce the number of rapes in Iran, it is necessary for there to be a cooperative relationship between women’s rights activists and the government. “Greater cooperation between lawmakers and women’s organizations, as well as increased collaboration with influential religious figures who have a say in shaping the laws, can greatly aid in the cause of confronting this issue,” he said.