Iran deal may be imminent

US Secretary of State John Kerry and French Foreign Minister Laurent Fabius expressed hope Iran and six world powers could finally be closing in on an Iran nuclear accord, but they and Iran’s Mohammad Javad Zarif said there was still some work to do. 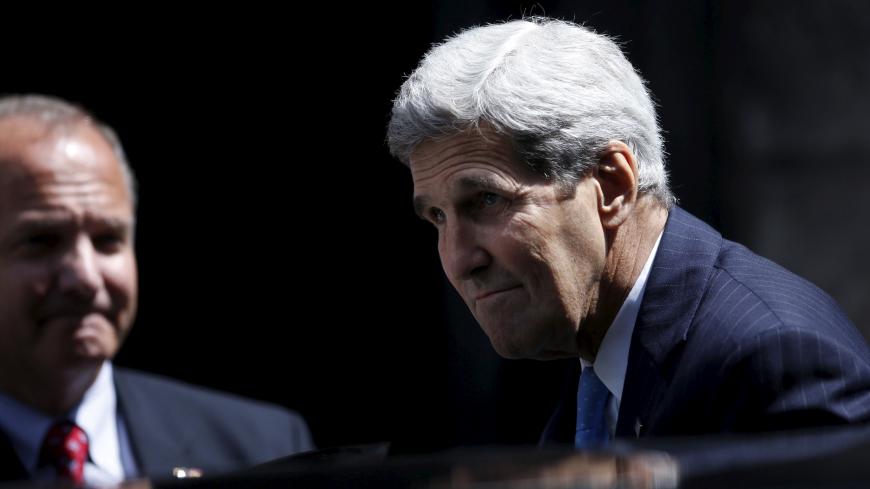 VIENNA — US Secretary of State John Kerry said he was hopeful as he and Iran’s Foreign Minister Mohammad Javad Zarif met again for 40 minutes July 12, and the French and Russian foreign ministers arrived in Vienna to rejoin Iran talks on the eve of a potential historic Iran nuclear agreement.

"I hope, I hope we're arriving finally at the last phase of these marathon negotiations,” French Foreign Minister Laurent Fabius, speaking in French, told journalists July 12 as he arrived at Vienna’s Coburg Palace hotel, where the negotiations are taking place. “I believe so.”

"We had a very good meeting. Positive,” Kerry said of a meeting with Zarif on July 11. “I think we're getting to some real decisions.”

But they still “have a few tough things to do,” Kerry continued. “I remain hopeful.”

Zarif, too, while appearing relaxed, told journalists July 12 that there was still work to do, as anticipation built among an increasingly restless press corps that a deal could be announced as early as July 13.

“We will be working tomorrow," Zarif, speaking in Persian, said July 12 from a second-floor Coburg balcony to journalists below. “We still have work to do,” he added in English.

US officials, for their part, cautioned against speculating on possible deal announcement dates, stressing there were still unresolved issues.

“We have never speculated about the timing of anything during these negotiations, and we're certainly not going to start now — especially given the fact that major issues remain to be resolved in these talks,” a senior State Department official told journalists.

Adding to the building anticipation that a deal could be imminent, Iranian media cited a police spokesman saying Iranian police were ready for street celebrations of a potential nuclear deal July 13.

Iranian President Hassan Rouhani also gave a speech July 12 in which he said he had fulfilled his 2013 election promise to resolve the nuclear issue. “I resolved the nuclear issue, as promised,” Rouhani reportedly said, even if the talks fail.