Is Egypt ready for a secular party?

Attempts to establish a secular party are springing up in Egypt, but can the country accept what this party preaches? 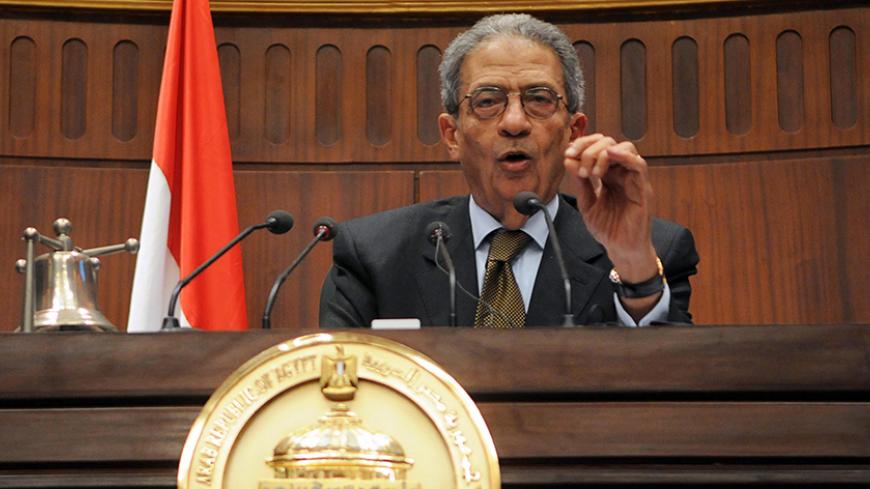 Amr Moussa, head of the assembly writing Egypt's new constitution, speaks after a vote at the Shura Council in Cairo, Dec. 1, 2013. - REUTERS

CAIRO — Every now and then, activists and politicians raise the idea of ​​starting a secular party in Egypt. But faced with controversy, they quickly reconsider their proposals due to political unrest and security concerns in the country.

Such efforts date back to the era of former President Hosni Mubarak, stirring controversy over whether a secular party would violate the successive Egyptian constitutions and whether it impugns religious beliefs. However, a current attempt may be the most important to date. Supporters claim they have been collecting signatures to launch the Egyptian Secular Party, but say they are facing wide criticism in the media.

Bahaa el-Maghawry, a political science professor at Cairo University, told Al-Monitor, “The general political and social atmosphere in Egypt is still against the establishment of a purely secular movement,” despite some analysts’ predictions that Egyptians would refuse a religious government after the overthrow of the Muslim Brotherhood. Columnist and former parliament member Mustafa Bakri asserted in his TV program, “My Responsibility,” which aired May 1 on the satellite channel Sada el-Balad, that the party contradicts the state’s constants, notably Islamic law. He described the party’s founders as collaborators and crazy people.

Al-Watan featured an April 30 article revealing the party establishment procedures. The story said that a number of atheist activists are promoting the party on their private Facebook groups and that the party aims to protect atheists and mainstream their ideas. The party’s alleged association with atheists raised heavy criticism.

Regarding an Egyptian secular party’s chances to gain wide popularity, Maghawry said, “Most likely the party will only be popular among those who have extremist secular inclinations, or atheists, because the Egyptian people are not inclined to secular or religious extremism and most of the party’s founders and cadres are not prominent public figures and do not have a long history in public political work.”

All of the party’s would-be founders are unknown figures at the political level. There is no information available on most of them, except for Hesham Ouf. Al-Monitor obtained information about him from his Facebook page, in which he states he is an Egyptian businessman who has worked in import and export since 1998. The page said he founded a number of online publishing companies, tried to establish some libraries and owns a marketing research company that worked on Mohamed ElBaradei’s and Amr Moussa’s presidential campaigns in the 2012 elections.

Party supporters announced they held a meeting July 3 to discuss its reputation among citizens, introduce its cadres and promote its programs.

Mahmoud Kbeish, a law professor at Cairo University, told Al-Monitor the constitution bans the establishment of “religion-based political parties,” a phrase that has two meanings, according to the Egyptian Constitution. The first is when a party is linked to a specific religion, such as an Islamic or Christian party. The second is when a party is affiliated with an anti-religious movement, such as the secular movement.

He added, “The Egyptian Constitution clearly and precisely identified the relationship between religion, the state and politics. Egypt is a civil state governed by the constitution and laws compatible with the principles of Islamic Sharia, all of which is inconsistent with the establishment of a secular party.”

Supporters of the proposed secular party are seeking to abolish Article 2 of the Egyptian Constitution, which specifies that the principles of Islamic Sharia are the main source of legislation, and Article 3, which specifies that the canons of Egyptian Christians and Jews are the main source of laws regulating their personal status, religious affairs and selection of spiritual leaders.

Al-Monitor has noted three previous attempts to establish a secular party. The first was with Hizb-Masr al-Um (Mother Egypt Party), whose incorporation was discussed at Mohsen Lotfi al-Sayed cultural salon. Mohsen Lotfi al-Sayed and a number of intellectuals, including two renowned historical researchers, Sami Harak and Wassim al-Sissy, submitted its incorporation request in 2004. The chamber of political parties’ affairs rejected the request, and some of the founders amended the incorporation charter by removing the express reference to secularism. The party was renamed Al Hizb al-Masri al-Liberali (Liberal Egyptian Party), and another request was submitted and was also rejected.

The second attempt to establish a secular party was led by novelist Alaa Hamed in 2011, who revealed on June 18, 2011, on the TV show “Masr fi Ousbouh” (“Egypt in a Week”) airing on ONtv channel, that he was attacked by some Salafi leaders in the city of Zifta because of his intention to launch the party. Some of Zifta’s residents denied Hamed’s allegations via telephone and during the show. The talk ended with a discussion of attempts to establish a party for unknown reasons. It is worth mentioning that Hamed was sentenced to prison in 1990 after publishing his book, “The Void in a Man’s Mind: God’s Trial,” which violated Egypt’s blasphemy law.

The third attempt was the secular Fajr Party. Shiite leader Bahaa Anwar called for its establishment in July 2013 to disband all religious parties in Egypt. He later amended the name to Secular Egypt Party and called for organizing the International Day for Taking Off the Hijab in September 2013. However, these calls were not welcomed, and attempts to form the party failed.

News sites reported that discussions among activists on social media included repeated calls for the establishment of secular parties in 2013.

Attempts to establish the Egyptian Secular Party are constantly evolving. The party announced May 8 on its official Facebook page that the Egyptian Embassy in New York refused to grant Egyptians residing there permits to form the party. However, Ouf, who is responsible for incorporating the party, said June 29 that the consulates had started to respond to attempts abroad to issue permits. This perhaps reflects the lack of a united and clear stance by all authorities regarding such attempts.

The chances of establishing the party remain remote, especially in light of the lack of a clear position by the state. Establishing the party anytime soon could be difficult, given the question of its constitutionality and opposition from those who consider it a violation of religious beliefs.