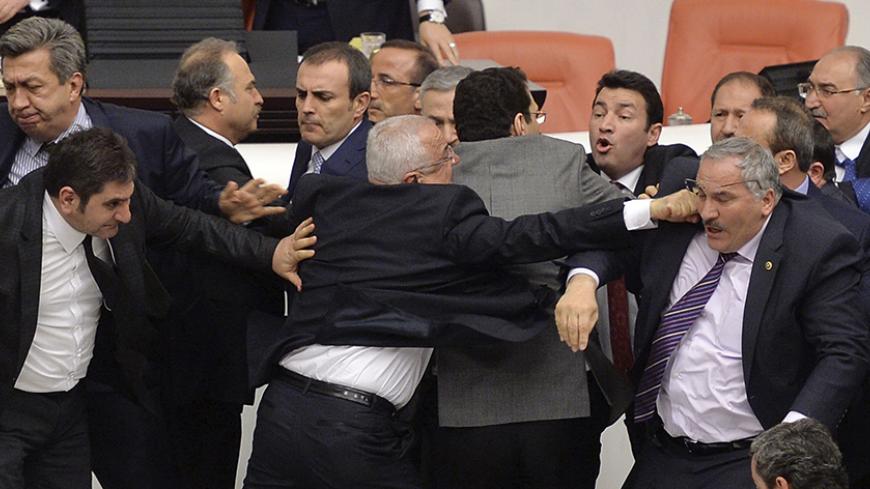 Main opposition Republican People's Party and ruling Justice and Development Party lawmakers scuffle during a debate on a legislation to boost police powers at the Turkish parliament in Ankara, Feb. 19, 2015.

The World Justice Project's Rule of Law Index for 2015 reported on June 3 that Turkey has fallen 21 places. In its 2014 report, Turkey had ranked 59th among 99 countries. In 2015, it was ranked 80th among 102 countries. The study came out just a few days before the June 7 elections, and when only a handful of opposition media outlets published the news in Turkish, it caused no uproar.

But the findings of this comprehensive study are crucial: The aggregate data supports an accelerated rise of authoritarianism. The findings also put Turkey in perspective over time and compares the country with others in its neighborhood and the world. Finally, they help forecast what Turkey can expect in the short run.

In the 2012-13 report that compared 97 countries, we again see that in almost all of the eight categories, Turkey worsened in 2014 and again in 2015. The World Justice Project explains its four principles, nine factors and 47 subfactors in gauging the rule of law. All countries are measured individually and then grouped into regions. Turkey is situated in the Eastern European and Central Asian countries. Out of 13 countries in its region, Turkey ranked sixth in 2014, and fell to 12th place in 2015. By polling Turkey's three biggest cities of Ankara, Istanbul and Izmir, the country was categorized as upper middle income.

Around the world, in 2015, when Turkey ranked 80th, Tunisia ranked 48th, Greece 33rd, Lebanon 68th and Mexico was 79th. One may find consolation in the fact that Turkey still ranked above Egypt (86th) and Iran (88th).

Focusing on the data from Turkey, since 2012 the project has observed Turkey doing relatively well in regulatory enforcement and its civil justice system. However, its performance has been struggling on fundamental rights and government accountability. In 2015, Turkey ranked at the bottom, 13th, in its region and 96th among 102 countries in the fundamental rights category. Afghanistan, Uganda, Pakistan, the United Arab Emirates and Russia are among the few countries that did worse than Turkey in this category. Fundamental rights are measured in eight different subfactors: equal treatment before the law, the right to life and security, due process, freedom of expression, freedom of religion, privacy rights, freedom of association and labor rights.

It is rather perplexing and troubling to remember that the Justice and Development Party (AKP) campaigned on promises to expand religious freedom and continuously asked the public in whose private life it ever intervened. The data proves the party wrong. Turkey ranked the lowest in religious freedom and privacy rights in all eight subcategories. The poor record highlighted in the 2012-13 report has gotten much worse in 2015.

Another category in which Turkey has been struggling is that of constraints on government power. The deficiencies in the functioning of the auditing system and political interference within the legislature and the judiciary have been reported as the major failures. Nongovernmental oversight by the media or civil society also regressed significantly in 2015. The findings make more sense when we recall that Turkey ranks first in asking Twitter to delete materials or shut down accounts, or in requesting information on users' identities.

Though Turkey was rocked by corruption scandals in 2014, it still fares best in the main category, “absence of corruption.” This category measures the corruption levels within the judiciary, traditionally held to be low in Turkey. But the data reveals that corruption levels in the legislature have increased significantly.

Al-Monitor spoke with over 10 lawyers, prosecutors and judges. Although each approached the matter from a different legal perspective, their shared grievance was pressure from the government. Lawyers in particular complained that Turkey has a high rate of arrest and trial, but a rather low rate of prosecution because suspects can be arrested and sent to court without adequate evidence. Due process has been subject to change in the last year as well, with the AKP having the parliamentary majority needed to pass legislation. Several draconian laws have been enacted despite strong public opposition. One prosecutor who asked not to be named told Al-Monitor, “The number of politically charged cases has increased tremendously since the battle to cleanse the bureaucracy of Gulen movement members. There are lists, rumors of lists and more lists coming through, alleging certain people are members of the movement and should be charged. Even though we know we are not able to send the person to prison, we are still pushed to bring the case to court. This increases the workload for everyone in the court system and slows down the process, which seems to be the overall purpose of this witch hunt. The longer the case lingers, the more the people are kept behind bars without proper charges or just psychologically tormented with intimidation.”

Metin Feyzioglu, chairman of the Turkish Bar Association, had a similar comment on the report, and emphasized that the major problem is the arbitrary enforcement of the law. Feyzioglu said, “We desire to see the righteous works moving forward, and that we can cleanse the system of arbitrary decisions. That curtails the independence of the judiciary. If it is arbitrary — if you belong to the upper divisions of society, if you know people in high places — then you would get your paperwork pushed through promptly with no issues in the bureaucracy. But if we believe in the supremacy of law, then only the righteous will be rewarded.”

Turkish researchers and scholars have also found similar matters — interference by the government into the judiciary and a lack of independent auditing — to be sore spots in Turkish legal system. KONDA research center’s 2011 findings indicate that Turkey's urban and higher income groups have less trust in law, along with Kurds. Interestingly, 58% of the population believes that judges, prosecutors and police discriminate against the poor, while 56% believe there is discrimination against those not perceived as supporters of the government.

Indeed, the rule of law index is not the only one Turkey has been gradually sliding down. In November 2014, Akdogan Ozkan, a seasoned columnist at T24, wrote a searing article listing different international studies on development, happiness and other indexes. The piece revealed the long suspected truth that 12 years of AKP rule have not been such a success after all. For example, the UNDP Human Development Report indicates that even during the 1990s, a notorious decade for Turkey, saw higher development rates than the AKP era.

How do Turks react to this fall in almost all categories in global measurements? If any of the data makes it into the mainstream media, it is promptly belittled as prejudiced Western politics, not objective analysis.