Leaked court documents about the worst terror attack in Turkey have revealed that Turkish security forces failed to act on 13 official warnings from the intelligence service. 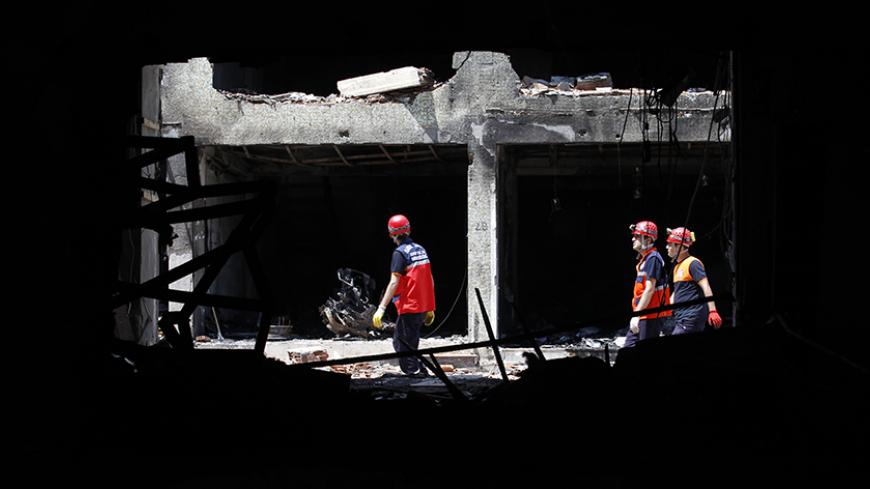 Search and rescue officers work at a damaged building near the site of a blast in the town of Reyhanli in Hatay province, near the Turkish-Syrian border, May 14, 2013. - REUTERS/Umit Bektas

Twin car bombs took 53 lives in the border town of Reyhanli on May 11, 2013, in Turkey's deadliest ever attack against civilians. More than 100 people were injured and hundreds of buildings and cars destroyed. The ensuing public outcry was suppressed through a media gag order on reporting and commenting on the issue.

Two years after the attack, it was understood that Reyhanli was only a part of a series of complicated events that can be attributed to the battle between the movement of Fethullah Gulen and the Justice and Development Party (AKP) government. At the center of the storm lies Turkey's National Intelligence Organization (MIT).

Several reports in the Turkish media implied that MIT was behind the Reyhanli attack. Many suspect that the AKP government, hoping to incite the US and Turkish public against the regime of Syrian President Bashar al-Assad, had planned an attack on its own territory and murdered its own citizens. These allegations deepened already existing suspicions about MIT.

As the battle between the Gulen movement and the AKP intensified and the civil war in Syria took a turn for the worse with the mushrooming of militant jihadist networks and the expansion of the Islamic State (IS), events kept MIT at the center of the battle in the domestic as well as the regional arena.

On June 27, Haberturk revealed leaked information about the Reyhanli case. These court documents mainly covered the communications between MIT, the police force and the gendarmerie about the two minibuses packed with explosives. They read that MIT had followed proper procedures and sent 13 reports to the police detailing its findings about a prospective attack and its suspects. When these alerts were ignored, MIT had asked prosecutor Ozcan Sisman to intervene. Records show that the last MIT warning arrived on May 9, just two days prior to the attack. Sisman had replied that there was not sufficient evidence to act and “no need to rush.” The court records suggest that the prosecutor had simply ignored the warning signs and allowed the attack to take place. Sisman and his colleagues told MIT that the suspects could simply claim they had been "cracking jokes amongst us" if there was an attempt to interrogate at this point and it would be best to wait.

Al-Monitor contacted intelligence sources to ask why the warning fell upon deaf ears and why the prosecutor did not take them seriously. The intelligence sources explained on condition of anonymity that they had been following a group of Turkish citizens suspected of collaborating with Syrian intelligence forces. The police were informed that the terror suspects’ likely first target was the Apaydinlar refugee camp, where defected Syrian soldiers were held. As security measures were beefed up at the camps, MIT noted a likely change in targets. The MIT agents made urgent reports to the police, handing over intelligence on the identities, activities and even the makes, models and license plates of the suspects' vehicles. The MIT's regional director in Adana even phoned Sisman personally, pleading with him to intervene. One member of the intelligence community expressed frustration, saying, “We have done everything within our agency’s capabilities to warn the authorities. We do not have the power of arrest.”

It only gets more confusing after this point, as Sisman bluntly blamed MIT for the Reyhanli attack in court. In his testimony, Sisman said, “When we stopped the MIT's gun-transporting trucks, we came across several names that were common with the Reyhanli attacks.” The government accused Sisman of being a member of the Gulen movement, and therefore a threat to national security. Sisman is currently detained in another case involving MIT. He is charged with espionage and violation of national security laws in the MIT case.

What went so wrong that, despite all the intelligence available, 53 people were left to die and hundreds injured in Reyhanli? Al-Monitor asked a senior source within the intelligence community. He replied, “The case of Reyhanli cannot be explained on its own. That is precisely why you are baffled. We need to put it in context. On Feb. 7, pro-Gulen prosecutors attempted to arrest MIT head Hakan Fidan. MIT has been a critical institution for them. They have tried to infiltrate the agency. Their goal was to replace Fidan.”

Reyhanli was the worst terror attack in Turkey. Anywhere in the world, when there is an attack of this magnitude, it is seen as intelligence failure and intelligence agencies come under scrutiny. MIT was no exception. The good news for MIT in this case is that there is solid evidence that the agency had collected, processed and shared the information as directed by law.

Turks took to social media to discuss the new evidence about the Reyhanli attack. Several people asked why the same prosecutor who claimed there was not enough evidence to interrogate the Reyhanli suspects went after the MIT trucks with just one anonymous phone call. This is a valid question that needs to be answered as soon as possible by the prosecutor and other officials.

Various sources within the intelligence community in Turkey seem convinced that Reyhanli was just a part of the conspiracy against Fidan. Another senior official told Al-Monitor, “The Gulen movement failed on Feb. 7 to get rid of Fidan [when he was subpoenaed to give a deposition]. Since then they used every possible opportunity to generate a public perception of intelligence failure. Then, we had the case of the MIT trucks, which led to the arrest of all those involved. In their testimonies, they are still blaming MIT.”

MIT has been caught in the crossfire in the prolonged battle between Gulenists and the government, facing dangerous allegations. Members of the agency give the impression that further information may be released in the coming months to clear up other allegations about Turkey’s relations with IS or various groups in Syria and around the border.

In Turkish politics, muddied waters take time to clear. Although we may never know the full story about the Reyhanli attacks or the events that followed, we can be quite confident of two things: The battle between two crucial political and technocratic powers had devastating results for the regular citizens, and we will hear more of the allegations against MIT in the era of coalition governments.

Editor's note: Due to a translation error, this article has been updated since its last publication.