With security tensions escalating in Palestinian refugee camps in Lebanon, Hamas and Lebanese officials are discussing ways to avoid the camps being turned into arenas for settling regional scores. 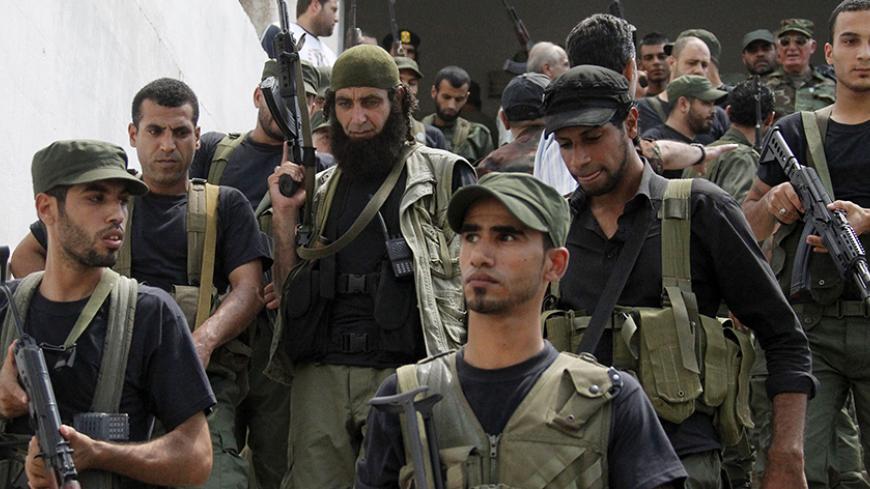 Palestinian gunmen from different factions hold their weapons during the launch of a joint security force that includes all Palestinian factions, to maintain stability at the Ain al-Hilweh Palestinian refugee camp near the port city of Sidon, southern Lebanon, July 8, 2014. - REUTERS/Ali Hashisho

A number of Palestinian refugee camps in Lebanon have experienced heightened security tensions since early February, with the Lebanese government alleging that Palestinians and Islamists belonging to armed groups are harboring in them. Sources among Hamas' leadership, speaking on condition of anonymity, informed Al-Monitor that Hamas is in constant contact with high-ranking Lebanese officials to try to head off security actions and other military clashes inside the camps.

Tensions took a turn for the worse May 5, when gunmen killed Moujahed Balous, a Hezbollah member, in the Ain al-Hilweh refugee camp, in south Lebanon. Rumors circulated in Beirut that Balous' assassination was an organized attempt to eradicate any pro-Hezbollah or pro-Syrian regime presence in the camp, but Maj. Gen. Munir Maqdah, head of the Palestinian force charged with preserving order in the camp, said May 7 that the reason behind the assassination was unknown and that no suspect had been identified. The rising tensions were also exacerbated by the growth in the camps of armed Islamist organizations — among them Asbat al-Ansar, Jund al-Sham, Fatah al-Islam and Shabab al-Muslim — which has led to armed clashes between them and the Lebanese army.

Ahmad Abdul Hadi, deputy director of Hamas’ political relations in Lebanon, told Al-Monitor, “Hamas is aware of the dangerous situation in the region and of its repercussions in Lebanon and in the Palestinian camps. This requires exceptional efforts to achieve two goals: first, to spare the camps from any security repercussions and stop them from turning into a regional pawn; second, the camps should not be a reason or a source of any security tension that threatens Lebanon and its civil peace.” Abdul Hadi further stated, “Security inside the Palestinian camps is an integral part of Lebanon’s security. [Hamas] is also convinced that there is a double conspiracy — to eliminate the refugee cause, on one hand, and to undermine Lebanon’s security and stability, on the other.”

There are 12 refugee camps in Lebanon, where half a million Palestinians live under harsh conditions. Palestinians constitute 11% of Lebanon’s population, but are banned from working in more than 70 types of jobs. In the past few months, part of Hamas' intensified contacts with Lebanese officials has been to discuss the suffering of camp residents as well as to seek ways to ease tensions between the army and the armed groups. In February, the movement launched the Stop Incitement and Violence campaign, as certain parties, which Hamas refused to identify by name, allegedly tried to involve Palestinians in Lebanon's conflicts and turn the refugee camps into a safe haven for themselves and sources of violence.

On March 26, Hamas’ leadership in Lebanon hosted a delegation of Islamic forces — Asbat al-Ansar, the Islamic Moujahid Movement, Shabab al-Muslim and Fatah al-Islam — in Ain al-Hilweh. The parties affirmed their support for Lebanon's unity and security and rejected involving Palestinians in Lebanon in internal and sectarian disputes. On May 18, a Hamas delegation paid a visit to the Lebanese parliamentarian Samir al-Jisr in Tripoli to inform him about the latest security developments in Nahr al-Bared camp.

The assessment of the latest security tensions in the Palestinian camps is colored by the perception of successive Lebanese governments that the Palestinian refugee camps are not only humanitarian burdens, but also security threats. Since the end of the civil war in 1990, Lebanese security forces have been tasked with overseeing control of the camps. On May 22, As-Safir ran a piece on the security situation, highlighting the expansion of army checkpoints at camp entrances.

A high-ranking Lebanese official mediating the security file for the Palestinian camps told Al-Monitor, on condition of anonymity, “There are security apparatuses in Lebanon that stir tensions on the ground inside the camps, because of the security blockade imposed on some of these camps for years now.” The same source said the Lebanese government should remove the military from the camps because, according to him, the Palestinians there are not a party to Lebanon's internal conflicts. He remarked, “The first step is to ease the security tension inside the Palestinian camps in Lebanon. The Lebanese army command should issue a decision to lift the military siege, as this step would guarantee the return of safety inside the camps.”

Osama Hamdan, Hamas' foreign relations chief, stressed to Al-Monitor “the need to impose neutrality over the Palestinian camps in Lebanon [and isolation] from the Lebanese and regional conflicts.” Hamdan said Hamas refuses to let the camps be used “to strike at civil peace and to settle foreign scores. Protecting the Palestinian presence in Lebanon represents a top priority for Hamas, as [it] would allow bolstering the brotherly Palestinian-Lebanese ties and directing the conflict toward the Israeli occupation.”

The tensions in the Palestinian camps have coincided with the situation in Syria and the involvement of Hezbollah in that country's civil war. This has pushed Islamic organizations such as the Islamic State (IS) and Jabhat al-Nusra to settle their scores with Hezbollah on Lebanese territory, including in the Palestinian camps. On June 8, Lebanese security sources announced the detection of suspicious movements by extremist groups with members different nationalities. According to sources, these groups are using the camps as bases of operation for carrying out car bombings and suicide attacks in the regions under Hezbollah’s influence or control.

Indeed, ​Hamas seems to be primarily concerned about the camps becoming arenas for settling scores between Hezbollah and the Islamic organizations fighting in Syria that have also been active in Lebanon, such as IS and Jabhat al-Nusra, and between groups loyal to Saudi Arabia versus those backed by Iran. There are also concerns that Israel would benefit from the Palestinians and the Lebanese focusing on their internal differences instead of it.

Al-Monitor learned from an anonymous Hamas official in Lebanon that the movement agrees with a number of Palestinian factions on forming a joint political and security commission in the camps to preserve their security and neutrality. The sensitive political and sectarian situation in Lebanon, including tensions among Sunnis, Shiites, Christians and Druze, has pushed Hamas to put distance between itself and all Lebanese parties equally, to avoid a hint of interfering in Lebanese internal crises and to instill calm in the camps by preventing internal conflicts from spilling over into them. There is no guarantee, however, that Hamas will be successful in its efforts given the presence of several internal and external parties with conflicting interests in Lebanon.

With the Palestine Liberation Organization (PLO) accused of helping drag Lebanon into civil war in the 1970s, Hamas must coordinate its position on protecting the camps with all Lebanese parties, beginning with the army and Hezbollah, not just the Palestinian factions.