In an interview with Al-Monitor, UN Special Coordinator for the Middle East Peace Process Nickolay Mladenov stressed the UN's commitment to supporting peace negotiations between Israel and Palestine. 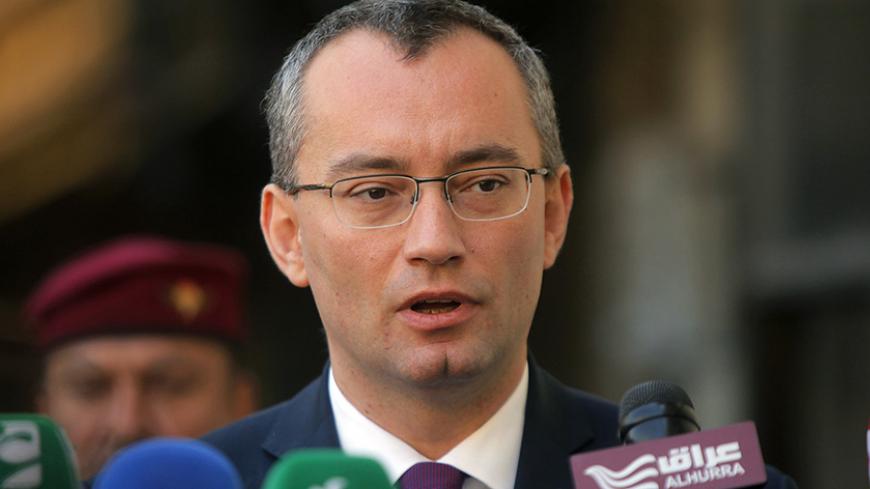 Nickolay Mladenov, as special representative of the United Nations secretary-general for Iraq, speaks to the media after a meeting with Iraq's top Shiite cleric Grand Ayatollah Ali al-Sistani in Najaf, March 3, 2015. - REUTERS/Alaa Al-Marjan

The UN's recently appointed Special Coordinator for the Middle East Peace Process Nickolay Mladenov has sounded a strong warning about the absence of any political process. In an exclusive interview with Al-Monitor, Mladenov spoke of the need for the new Israeli government to make a move for peace, calling the current status quo “ultimately untenable.” The peace envoy insisted that such a process must include a freeze of settlement activities, saying, “The absence of a political process today is dangerous for all … particularly given the turmoil in the region.”

Mladenov said that the goal of the UN and the international community is the lifting of the closure on Gaza, generally referred to as a blockade. However, “Before that becomes possible, we will work with the [Palestinian Authority] and the Israeli government to facilitate the entry of much-needed construction materials,” he said.

The UN official called for bridging the division between the Gaza Strip and the West Bank in the framework of legitimate institutions. “Palestine is one, and I will work with determination to support President [Mahmoud] Abbas and Prime Minister [Rami] Hamdallah in their efforts toward achieving reconciliation.”

On some of the issues that are holding up reconciliation, the UN official called for the speedy “reintegration of civil service employees and the return of PA forces to the crossings [as] critical parts of such a bottom-up approach to reconciliation.”

As to the continuation of Israeli settlement activities, Mladenov reiterated the position of the UN secretary-general that the international community “will not recognize unilateral actions” on the ground. “I will not speculate on the intentions of the new Israeli government, but rest assured that the UN is looking to Israel to demonstrate its readiness to engage with the Palestinians on building peace, including by freezing settlement activities,” he added.

Al-Monitor:  The UN secretary-general has been waiting for an Israeli government to be formed to push for the restart of peace talks. Have you had any success in moving the dormant talks forward? Do you have a game plan?

Mladenov:  We are in the early days of the new Israeli administration, and although it is difficult to see the road forward on resuming talks, one should never give up trying. Since taking up my assignment [Feb. 5], I have engaged with the Palestinian and Israeli leaders as well as with representatives of political parties, civil society and business stakeholders in the West Bank and Gaza. I have also met with leaders in Egypt and Jordan.

The absence of a political process today is dangerous for all, and there are too many flashpoints — in Gaza, East Jerusalem and the West Bank, particularly given the turmoil in the region. The goal remains the same: two states, living side by side in peace and security. The secretary-general was very clear about this in April, when he urged the incoming Israeli government to reaffirm its commitment to the two-state solution and to take credible steps to foster an environment conducive to a return to meaningful negotiations, including a freeze of settlement activity. What we need to do now is to explore with all sides what the realistic options for a return to a political process are. While the UN, the Arab countries, the EU and bilateral partners can and must do everything possible to support such an objective, its success ultimately lies with the parties themselves.

Al-Monitor:  Now that you have met with all parties and visited Gaza, what are your priorities?

Mladenov:  My first priority is to explore realistic options with the parties on the ground for a return to meaningful negotiations with a view to achieving a two-state solution. For any negotiations to be successful, however, it is critical that the two sides face each other from solid foundations. As such, a second priority must be to support Palestinian unity and the strengthening of Palestinian institutions. The divisions between Gaza and the West Bank must be bridged in the framework of the legitimate institutions. Palestine is one, and I will work with determination to support President Abbas and Prime Minister Hamdallah in their efforts toward achieving reconciliation. Third, but no less important a priority for me, is addressing the humanitarian and developmental challenges of Palestine under occupation, whether this is in Gaza, the West Bank or East Jerusalem. Most urgently, perhaps, we need to work on expediting the reconstruction efforts in Gaza, where so much needs to be done. Our goal remains to see the lifting of all closures. However, before that becomes possible, we will work with the PA and the Israeli government to facilitate the entry of much-needed construction materials.

Al-Monitor:  Is there any light at the end of the tunnel regarding returning the Palestinian presidential guards to the Gaza crossings and solving the Hamas-appointed employees problem?

Mladenov:  I believe that inter-Palestinian reconciliation will only be possible if both sides start taking small but incremental steps in the right direction. The reintegration of civil service employees and the return of PA forces to the crossings are critical parts of such a bottom-up approach to reconciliation. The government of national consensus, with support from the international community, is working to address these issues. Prime Minister Hamdallah in particular has focused a lot of efforts on the issue of public sector employees in Gaza. These issues would be more easily resolved if there were a political horizon in line with the intra-Palestinian unity agreement of April 23, 2014, including the holding of long-overdue elections. What concerns me today is the latest indiscriminate rocket attacks by militants from Gaza toward Israel. Such acts can undermine the reconstruction efforts and risk the lives of both Palestinians and Israelis alike.

Mladenov:  The two-state solution is the only realistic prospect for just and sustainable peace. The current status quo is ultimately untenable. There are too many flashpoints and risks. Settlement construction, unilateral moves and other actions ultimately undermine not only the road to agreement, but the very essence of the two-state solution. On the more positive side, generations of Palestinians and Israelis have come to realize that peace cannot be reached through conflict, but must be the result of negotiations. This hard-earned belief in peace and negotiations must not be allowed to wither away. If it does, it can further destabilize the Middle East for decades.

Al-Monitor:  You have taken a public position on settlements, calling on Israel to freeze settlement activities. Do you foresee this happening with a pro-settlement government in Israel?

Mladenov:  The UN’s position regarding settlements is very clear and has been repeated on many occasions, including on May 15, when the secretary-general reiterated in a statement that settlements are illegal under international law and urged the government of Israel to halt and reverse such decisions in the interest of peace and a just final-status agreement. The secretary-general also reiterated that the international community will not recognize unilateral actions on the ground. I will not speculate on the intentions of the new Israeli government, but rest assured that the UN is looking to Israel to demonstrate its readiness to engage with the Palestinians on building peace, including by freezing settlement activities.