Abu Mazen: I Will Not Utter The Words ‘Armed Resistance’

Palestinian Authority President Mahmoud Abbas, while visiting Beirut, said he was ready to reconcile with Hamas and that he unequivocally rejected armed resistance against Israel, stressiong “peaceful” and “diplomatic” resistance. 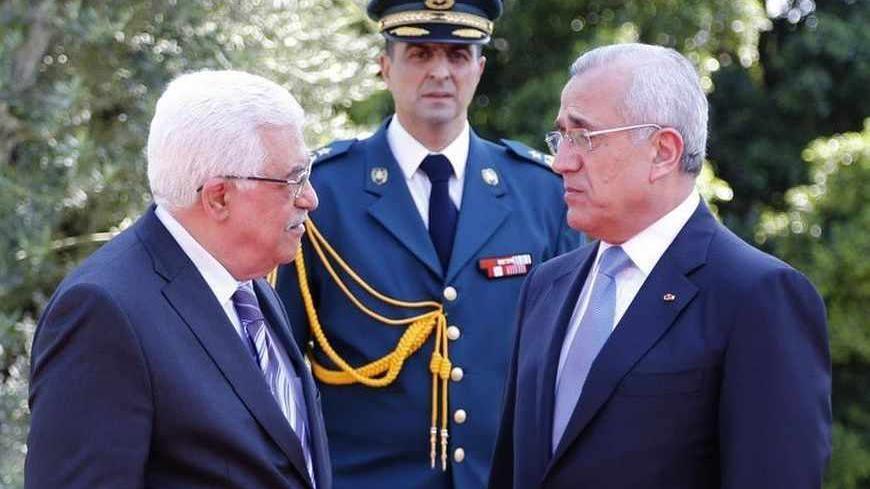 On July 4, the second day of his visit to Lebanon, the Palestinian Authority (PA) Chairman Mahmoud Abbas met with a panel of journalists, including one from Al-Monitor, at the Beirut hotel he was staying in. He discussed the negotiations with Israel, Palestinian reconciliation, relations with Hamas, Palestinians in Lebanon, and their armed groups in the refugee camps. Abbas took noteworthy positions, on which he was asked whether and how they can be implemented.

Abbas started his discussion with a quick introduction that focused on key issues. He said, “First, there is [US Secretary of State] John Kerry’s political mission. We hope that, in his upcoming visit 10 days from now, he will have something that will help us return to the negotiating table. There are vigorous US efforts that, if successful, will mark a new beginning. If we negotiate, that doesn’t mean that we will achieve everything. But we will strive to achieve our national goals, first and foremost Jerusalem, which concerns the Arab and Muslim worlds, and the whole world. We will not concede on our right to Jerusalem. We promise that if Jerusalem is not the capital of Palestine, then there will be no solution.”

“The second point is about the Palestinian reconciliation, which has been stumbling. But I assert that if Hamas agrees to hold elections, we are ready to hold them within three months. And they will be free and fair. So I ask God to guide them [Hamas] to end this shameful and divisive stage in our history.”

“The third point is about our relations with Lebanon, which are based on a sound foundation. We are temporary guests in this country and we are under the law, not above it. We are a positive element. We do not interfere in Lebanese affairs nor do we side with one Lebanese party against another. We want Lebanon to be stable, united and sovereign. The same thing goes for our relations with our Arab brothers. We don’t interfere in what is happening in any Arab country, especially with regard to the events that started in Tunisia, then moved to Egypt, Syria, Yemen and others.”

"I admit that we have neglected the Jewish communities throughout the world, especially in the US. I used to think that they are a 'bogeyman.' But in reality they are not so. This doesn’t mean that I acquit them of extremism and intransigence, but they are not like some Israeli politicians. They [US Jews] can hold discussions and dialogue. I have done this with them. I collected all their questions to us. They had 14 questions on Jerusalem, the Jewish state, settlements, borders, etc. We wrote our official responses in a booklet, which we gave them.

"I ask Arab diplomats and journalists to sit with those Jews so that the latter can hear the other side’s opinion, because right now they only hear Netanyahu’s opinion. Some of them have started realizing that the Israeli government is responsible for the intransigence. I have held discussions with AIPAC. As a result of those discussions, AIPAC told me that they will tell Obama and Netanyahu: ‘We have found a Palestinian partner for peace. Is there an Israeli partner?'"

“Our cause is just but it is not being heard. We have to make the decision-making center in Washington hear it. We do not accept the one-state solution, but [we accept] the two-state solution. Regarding the settlements, we cannot accept them as a fait accompli. The same thing happened in Egypt. When Sadat began talking with the Israelis about peace, Moshe Dayan told him that peace without Sharm el-Sheikh is more important than Sharm el-Sheikh without peace. But the Egyptians insisted on their demands until they recovered every inch of Egypt’s land. We have to do the same thing. We shouldn’t be tricked into accepting the so-called settlements as a fait accompli. We say that all settlement activity since 1967 is illegal. And we will negotiate on that basis.”

Abbas was asked whether the so-called Arab Spring diverted attention from the Palestinian cause and whether Mohammed Morsi’s fall will help the reconciliation with Hamas. Abbas answered, “The so-called Arab Spring is an internal Arab dynamic. We cannot deny that it affected us significantly. The countries in which the Arab Spring took place have been busy with their own crises. But despite that, we were able to get 138 yes votes for our membership at the UN General Assembly, with 41 abstentions, and nine no votes. That happened at a time when [Arab Spring countries] were in the midst of their crises.

"So our cause is still alive and present despite all the crises in the region and the world. So I once again assert that we will not interfere in those countries’ affairs. We may be affected by what’s happening in them because we are humans and Arabs, but we have an interest in taking care of our matters only and to not go back to an earlier time when we got involved in Arab affairs.”

Regarding Hamas, Abbas said, “We know that their relations with Syria and other Arab countries have been affected. That may have been caused by some unclear [Hamas] policies. But Hamas is still part of the Palestinian people and we want to reconcile with them today. We don’t want to exclude anyone. Recent developments may help in achieving reconciliation.”

Abbas was asked about his term expiring, about the absence of the word "resistance" in his speeches and whether he was ashamed of that word. He was also asked why the PA has not signed regional agreements with Arab countries regarding Palestinian gas reserves. He replied, “Yes, my mandate as president has expired, and I demanded the holding of legislative and presidential elections before my mandate expired three years ago. It is not true that I am the one disrupting the formation of the neutral government stipulated in the Palestinian reconciliation agreement. As Hamas requested at the time, there should be a technocrat government, headed by me, for three months, and that [government] would hold the elections. I am ready to form that government. So let Hamas declare that it accepts holding the elections and I will form the government immediately.”

“Regarding the Palestinian gas issue, we have many problems with Israel in that regard. But we have an agreement with BP [British Petroleum], which represents us. And we will get our rights in the oil and gas as well. We also have potash in the Dead Sea. But because we are under occupation, we cannot implement agreements with any country.”

“Regarding the word ‘resistance,’ yes, I tell you that I will not utter the words ‘armed resistance.’ We have tried it, most recently in the second intifada, which destroyed everything for us. Then we had the 2007 war and the 2009 war, [NOTE: Here it seems Abbas has meant to say the 2008-2009 and the 2012 (Pillar of Defense) Israeli-Gaza Wars, since the 2007 was an internal conflict — J.A.] when Egypt for the first time sponsored a truce agreement between Hamas and Israel. According to that agreement, armed action is considered a hostile act.”

“So I’m not ready to futilely launch a missile that will destroy my country. We are with peaceful, popular, political, and diplomatic resistance. An example of that is the Bab al-Shams resistance that is facing the Israeli authorities with peaceful protests and with peaceful mobile tents. This kind of peaceful resistance has been agreed upon between us and the Hamas movement. We have [put down that agreement] in writing with brother Khaled Meshaal and he announced it. We have agreed on four points: (1) the 1967 borders, (2) peaceful resistance, (3) elections, and (4) that I am the representative of the Palestinians in the negotiations. I’m not ready to enter into futile adventures. But we will practice all sorts of political and diplomatic forms of resistance. There are other opinions. We accept and respect them because there is freedom of opinion and expression, which include insults.”

Asked about his concession on the right of return for Palestinian refugees, he said, “Since 1988, we have made no concessions. In the last 20 years, we only negotiated for a few months with Ehud Olmert. We were very close to a solution. Then Olmert’s [government] fell and his successor rejected what was agreed upon. The rest is nothing. As for moving the refugees to Gaza, the Israelis conditioned such a move on the refugees waiving their right of return, so I refused.”

In response to a question about the talks with John Kerry, which would precede the negotiations, Abbas said, “We are not putting preconditions on the negotiations. But we are asking [to clarify] the foundation and basis for the negotiations. When we talk about the two-state solution, if is not a precondition. It is one of the international law’s principles and approach to resolving our issue. And when we talk about the 1967 borders, this is also the outcome the previous negotiations. We said that any land exchange must be equally balanced. When we say that building settlements is a unilateral action that we reject, that too is not a precondition. Rather, [that position] is supported by 13 UN Security Council resolutions rejecting settlements, and Obama has repeated that in his speeches. He rejected settlement activity even if it came in the ‘natural growth’ context. There is also the prisoner issue. So this is the foundation and basis of negotiations. So if you [Israelis] are willing, we are ready.”

Abbas was asked, “Is it true that the former emir of Qatar, Hamad bin Khalifa, warned you about going to the UN to request UN membership for Palestine and threatened you with punishment in case you did?” Abbas answered, “No, this is not so. Hamad advised me not to go to the Security Council because our request will be met with an American veto. But I wanted to directly ‘hear’ that American veto. Then when we went to the UN General Assembly, we went with the support from all Arab countries with no exception.”

Finally, Abbas was asked why he didn’t meet with Hezbollah Secretary-General Hassan Nasrallah. Abbas said, “Simply because I wasn’t told that Sayyed Nasrallah wished to meet with me. As far as I’m concerned, I have no problem going anywhere or meeting with anyone.”