How Morocco plans to contain its Salafists 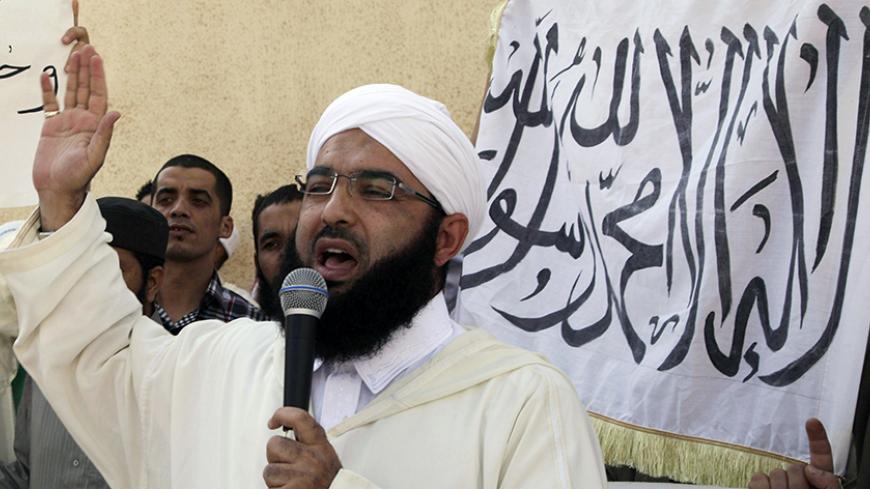 Moroccan Salafist preacher Hassan al-Kettani speaks outside a mosque in the impoverished Rahma neighborhood of Sale during a Sept. 21, 2012, demonstration against an American film that mocks the Prophet Muhammad. - REUTERS

RABAT, Morocco — Debate on Salafism emerged in Morocco after the infiltration of North Africa by the Islamic State (IS). Although there are more than 1,000 Moroccans fighting for IS on the battlefields of Iraq and Syria, the group enjoys only limited support in Morocco from a small number of sympathizers and Salafist theorists, such as Sheikh Abdul Razzaq Ajha, who was arrested March 6 preparing to travel to Syria, and Fatiha al-Mejjati, who has already reached IS-controlled Raqqa in Syria.

Salafist sheikhs in Morocco are divided between those supporting IS and those who joined pro-regime political parties to oppose the extremist group. Since the release of Abdelkarim Chadli, a hard-line Salafist convicted on terrorism charges in 2003, and other Salafist jihadists from prison in 2011, it appears that the Moroccan government has embarked on a quiet campaign to integrate Salafist theorists into the nation's political life.

A new Salafist dynamic emerged when Abdelwahab al-Raqiki, alias Abu Hafs, decided to take part in the country's political and partisan life and joined the Islamic Renaissance and Virtue Party in June 2013. There are fears, however, that this new phenomenon could lead to Salafist sheikhs losing credibility among youths and that this in turn might drive them further toward extremism.

Some well-known Salafist sheikhs have rejected the issuance of fatwas calling on Moroccans to join the fighting in Syria. Among them is Mohammad al-Fizari, who announced his opposition to such fatwas in June 2013. His move was followed by Aou Hafs' entrance into politics, along with other Salafists. Meanwhile Sheikh Umar al-Hadouchi, considered the most hard-line Salafist, refused to switch his allegiance from al-Qaeda to Abu Bakr al-Baghdadi’s group. He has fiercely attacked IS on several occasions and mocked its declaration of a caliphate, calling it a “mockery.”

Chadli surprised everyone May 23 by joining the Democratic and Social Movement, which was founded in 1997 by a retired police general, Mahmoud Arshan, who is known to be close to the regime. Chadli, who had previously disavowed democracy and the electoral process, pledged May 28 to bring large numbers of Salafists to the party in coming months, to convince them to work within the existing legal political parties and to abandon extremist ideologies.

Abdel Hakim Abu al-Lawz, an expert on Salafist movements, said the participation of Salafist figures in political parties raises questions about the extent to which the Salafist discourse has developed, its prospects and its challenges. It also raises questions about the ability of the Salafists to put forward a political project and adopt visions incorporating denominators common among the majority of the political forces.

Lawz told Al-Monitor, “The new Salafist position is very ambiguous and raises concerns and fears. The announcement to participate in a political party cannot be justified and defended or attacked and denounced. It is also impossible to interpret the announcement itself within the general and objective conditions surrounding the Salafist current lately.

“Yet, there is no doubt that the mere announcement of leading Salafist figures is a development in itself and a shift in discourse and attitudes. This discourse structure has significantly developed, yet these changes remain narrow and not qualitative. This means that opportunities to achieve development, openness and innovation in the discourse are possible in a way in line with the requirements and constants of the official project [the monarchy],” Lawz said.

Mohammed Masbah, a scholar at the Carnegie Middle East Center, said that the integration of Salafists into political life is necessary. At the same time, it is probably not in the state’s best interest if repentant Salafist sheikhs are totally discredited by inclusion in parties advocating for the state project. It is good, however, for the state to use them for countering extremism by allowing them to open dialogues within jihadist movement channels, while observing from a distance.

Masbah told Al-Monitor, “An approach [to join pro-regime parties] based on pre-emptive control would be counterproductive, because the historical leaders would lose their influence among the youths who are still attached to jihadist ideas. This approach would discredit ‘moderate’ sheikhs and would therefore lead to the emergence of more extremist alternative leaders. This was practically observed with new IS leaders, who mainly rely on a new jihadist generation that is separated from its historical leaders."

Despite the benefits the Salafists might bring to the state by joining political life in the short run, Lawz thinks that the state is not betting entirely and strategically on these sheikhs to resolve the Salafist jihadist issue once and for all. He said the sheikhs have already lost momentum due to excessive media appearances. According to Lawz, the regime still believes that its security policy is effective, which is reflected in the establishment of the Central Bureau of Judicial Investigation in March in the city of Sale. It is tasked with fighting terrorism and organized crime.

Idris Kanburi, a Moroccan academic and expert on Islamist groups, said in a June 4 article in the London-based Al-Arab that it is unlikely that the integration of scattered Salafist groups into pro-regime parties is an attempt by authorities to take the “Islamic authority” out of the Justice and Development Party, which is leading the current government coalition. Rather the effort is in preparation for the next elections, whenever they may be, to disperse conservative votes.

It seems that the Moroccan government hopes to contain a group of Salafists within almost inactive political entities loyal to the regime in an attempt to improve its image and to respond to criticisms of rights organizations about the state’s desire to eradicate the Salafists. At the same time, the state is trying to prevent the sheikhs from establishing purely Salafist entities. Nevertheless, this process remains limited to a number of figures who have lost the sympathy of the Salafist popular base that disavows the political system and is attracted to IS’ jihadist discourse.