The visit of the Vatican's envoy to Lebanon coincided with a meeting between the country's top Christian leaders, Gen. Michel Aoun and Samir Geagea, who revealed a joint statement that could pave the way for a president to finally be elected. 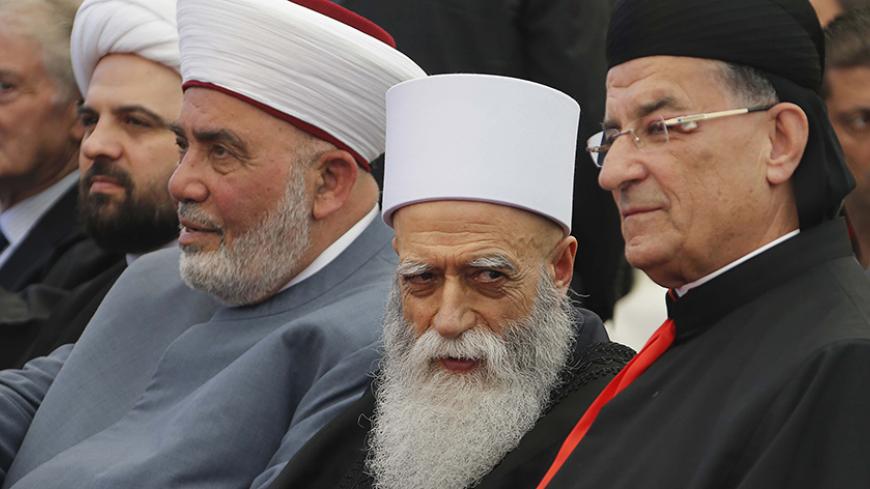 Maronite Patriarch Bechara al-Rai (R) sits beside other religious clerics in a celebration to solidify the reconciliation between Christians and Druze in Brih, May 17, 2014. - REUTERS/Mohamed Azakir

BEIRUT — Christian political and religious leaders in Beirut intensified efforts to address the conditions of Christians in the region and to find a solution to the stalemate in Lebanon, where the presidential vacuum has continued since May 25, 2014. Vatican envoy Cardinal Dominique Mamberti, leading a delegation from the Holy See, arrived in Beirut May 29.

A Lebanese official who met with Mamberti spoke about the visit to Al-Monitor on condition of anonymity. He said that the cardinal is no stranger to Lebanon and its issues. He served as the Vatican's secretary for relations with states, the equivalent of foreign minister, from 2006 to 2014, a time of crisis for Lebanon. He is currently the prefect of the Supreme Tribunal of the Apostolic Signatura.

The Lebanese official added that Mamberti seemed to be well aware of the details and complexities of the issue during his visit. Most importantly, the Vatican official revealed to his hosts — Prime Minister Tamam Salam, parliament Speaker Nabih Berri, former President Michel Suleiman and other ministers and party leaders — that he did not bring an initiative nor ideas regarding the presidential crisis or the Christian situation in the region following displacement by the Syrian civil war and the emergence of the Islamic State.

Mamberti explained to every person he has met with that his mission is to collect information and views from the political parties, particularly the Christian ones. Most notable among his questions, which focused on the fate of Christians in Syria, were: How are the situations in Lebanon and Syria assessed? What are the main risks facing the Christians in Lebanon and its surroundings? The Vatican envoy posed questions about the various parties, groups and environments supporting and funding terrorism. He asked about Syria and solicited the opinions of the Lebanese on the fate of the Syrian conflict, more than four years after its outbreak, and on where the conflict could lead.

The most important issues on the papal envoy's agenda were the status of the Lebanese state, system and republic, and the situation of Christians in Lebanon. The official who met with Mamberti revealed that Mamberti's most important task during the visit was to coordinate with the Maronite Patriarchate on finding a way out of the presidential vacuum, while meeting the Christian demands of choosing a president that truly represents the Christian community in Lebanon.

The two leaders have been at war since 1990, and the political and electoral dispute between them continues. Geagea visited Aoun in his residence and announced a joint “declaration of intent.” It announced their commitment to the election of a “strong president in his community,” meaning the Christian community.

The same official revealed that the papal envoy, the papal nuncio in Beirut and Maronite Patriarch Bechara al-Rai were briefed on the statement in advance, gave it their blessing and encouraged both parties to announce it and proceed with its directives.

The same official confirmed that an understanding has begun to crystallize between the two Christian blocs, as well as between the Maronite Patriarchate and the Vatican, on working together to take an accurate official poll of the Lebanese Christians' top choices for the presidency. This survey is to be followed by a full Lebanese and Christian pledge that this candidate be elected president by acclamation, or that the first two candidates alone compete in the presidential elections in parliament.

The same official said that a clear Christian majority rejects the idea of the current parliament choosing the Maronite president without any restrictions. The parliament in question was elected in 2009 under an electoral law that does not guarantee a true representation of the Christians and allows nearly a third of the Christian parliament members to be elected through Muslim votes.

The same official said that the efforts of Christian political and religious leaders have started seeking a solution to the impasse. The proposed Christian poll and commitment to abide by its results have started to gain ground in the absence of other viable efforts.