The unemployment rate among Jordanians is increasing, as Syrian refugees in Jordan are willing to work for longer hours and lower wages. 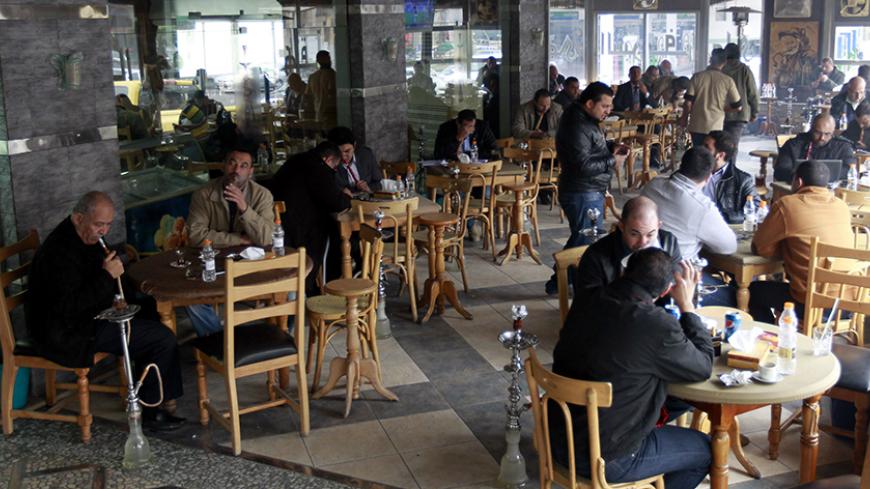 Men smoke water pipes at a cafe in the Jordanian capital, Amman, on Feb. 3, 2014. Some Syrian refugees have found jobs in cafes and other places, angering Jordanian job-seekers. - KHALIL MAZRAAWI/AFP/Getty Images

As the civil war drags on in their country, Syrian refugees in Jordan are left jobless or exploited in increasingly unwelcoming host communities across the kingdom.

Munir, who didn’t want his real name to be published, is a 20-year-old refugee from the southern Syrian city of Daraa who crossed into Jordan in 2012, where he has worked illegally ever since.

A job working 14-hour shifts in a cafe in Zarqa, 25 kilometers (15 miles) northeast of Amman, has so far been his sole means of feeding his parents, two small sisters and a younger brother who was left unable to walk after a bullet struck his femur during a protest back in Syria.

“I earn seven Jordanian dinars a day [$10]. I don’t have a break, and eating a falafel sandwich is my only treat. My boss is kind but it is undeniable that I am exploited,” Munir told Al-Monitor.

Munir’s account is not unique. He’s one of some 1.4 million Syrians living in Jordan, according to government estimates, only half of whom are registered with the UN refugee agency. The vast majority, some 80%, live in Jordanian cities and not in refugee camps.

The swelling number of Syrians has stoked increasing resentment toward them among locals, whose thinning patience over the more than four-year conflict has pushed them to blame the new arrivals for stealing their jobs.

Although government figures show an average of 12.5% unemployment among Jordanians in the past decade, a recent study conducted by the International Labour Organization pointed out that around 22% of locals were out of work in 2014, up from 14% prior to the Syrian crisis.

According to the study, about half of Syrian men living outside the camps are active in Jordan’s undocumented labor market, with only 10% having legal work permits. “There are some signs of Syrian refugees entering into jobs that were part of the job market that existed prior to their arrival, hence they do to some degree push Jordanians out of the labor market,” the study read. An even steeper increase in the kingdom’s unemployment rate was registered among young people, with 35% of those under 24 out of work compared with a pre-crisis figure of 19%.

Highly skilled and willing to work for lower wages, Syrians are simply pushing Jordanians out of the workforce, according to Jordanian Minister of Labor Nidal Katamine. He told Al-Monitor, “Syrians are competing with Jordanians over jobs. … Syrians have probably higher standards of training than the Jordanians and, in some cases, job opportunities are more suitable for them.”

Zayyan Zawaneh, a Jordanian economist who once worked for Jordan’s Central Bank, told Al-Monitor that the study's findings were “shocking,” especially since Jordan already had problems in this sector prior to the Syrian conflict. “Syrian refugee workers are crowding out Jordanians in the labor market,” the economist said. “They are especially affecting the construction and agricultural sectors and retail trade.”

This also poses very deep social economic, political and security threats to Jordan, according to Zawaneh. He said, “Jordan is surrounded by conflicts. Extremism and terrorism are on the Jordanian borders. So what do young people who are unable to find jobs do? One choice could probably be to join extremist groups.”

At last month’s regional World Economic Forum at the Dead Sea, where political and business leaders discussed a future of growth and investment for a region mired in turmoil, Jordan’s Minister of Planning and International Cooperation Imad Najib Fakhoury said that Syrians accounted for 20% of Jordan’s population of about 9 million.

“In some northern towns and villages, the majority of the dwellers are Syrians,” Fakhoury said. “We estimate that at least 120,000 Syrians are working in the kingdom, displacing Jordanians’ jobs and pushing wages down,” Fakhoury said.

The minimum wage in Jordan is set by executive decree as 190 dinars ($268) per month, with eight hours of work per day and 40 hours a week. But Syrians work for longer hours and accept much lower wages. “The facts are not what people are claiming, looking from the outside and easily saying that Jordan should give work to refugees,” Fakhoury said. “One needs to be really cautious concerning what recipient countries are pushed to do.”

“There is a widespread perception among Jordanians that Syrians are crowding the country’s labor market to their detriment,” Anani told Al-Monitor. “At the same time, Jordanians have started showing interest in jobs that they previously shrugged off and that Syrians are accepting, like station attendants, garbage collectors and fruit or vegetable pickers in the Jordan Valley.”

Anani also pointed out that it’s not Syrian laborers who have replaced Jordanians in the market but other foreigners, especially the 600,000 mainly Egyptian guest workers currently employed in the kingdom. He said, “Egyptians’ wages went up and Syrians have replaced them, because they are not only asking for lower wages, but also show more technical skills and competence.”

In most cases, Syrians accept lower wages because assistance from international agencies provides them with extra income. Anani said the combination often surpasses the wage that a Jordanian worker would make with a single job. “If Jordan starts giving Syrians work permits, locals will cry wolf as they see themselves as the government’s priority. On the other hand, if we turn a blind eye on the issue, what will Syrians do?” he asked.

Jordanian economist Yusuf Mansour is one of the few voices in the kingdom calling on the government to grant work permits to Syrians. He wrote in a recent Venture Magazine op-ed, “Syrians not only increase the supply of labor, but they also concomitantly increase demand, using their wages to rent apartments, buy goods and services, putting factories and retailers to work.“

As for the 100,000 or so Syrians confined to refugee camps in Jordan, Mansur sees them as a capable work force whose dignity and well-being are being harmed every day by the aid they receive.

Habib Jabar, a Syrian from Homs, arrived in Jordan with his wife and five children in 2014 and found refuge in the country’s Azraq refugee camp.

“Life is very difficult here,” Jabar told Al-Monitor. “Water is far away. There’s no electricity, no jobs and prices in the mall increase every day.”

Jabar is planning to go back to Syria or even considering trying to reach Europe on one of the overcrowded boats sailing from Africa.

“If I got a work permit, I would think of staying here. It would be safer for all of us, but unfortunately, it’s forbidden,” he said. “In Syria, I was a printer. Here I am nothing. I stay in my prefabricated house all day and wait. We cannot work, we cannot earn money, we cannot pay rent outside, so we are stuck here with the flies.”