Culture and Sports Minister Miri Regev is fond of reminding artists and cultural institutions that she has the power to determine their fate, including withholding funds if they fail to meet her standards of patriotism. 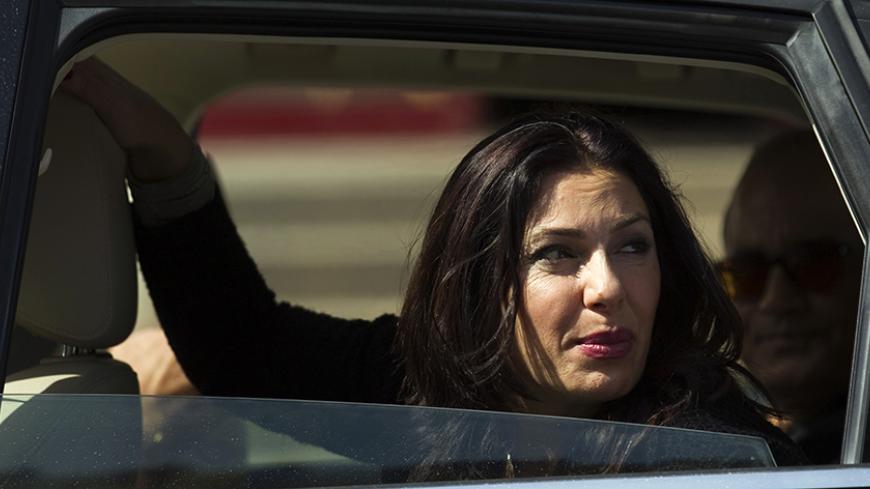 Miri Regev looks out a car window during a campaign stop in Netanya, north of Tel Aviv, Feb. 25, 2015. - REUTERS/Amir Cohen

Culture and Sports Minister Miri Regev came well prepared to her first meeting with representatives of Israeli cultural institutions on June 11. Regev, on a collision course with “left-wing artists” since her first day on the job, arrived accompanied by legal advisers and driven by a clear goal — to show this group of leftists who's the new boss.

A day before, Regev had been at the eye of the storm after threatening to withhold funds from the Almina Theater, established by Arab actor Norman Issa with his Jewish wife, for as long as he continued to refuse for political reasons to appear in the Jordan Valley. “The pressure being applied on me borders on blackmail,” Issa wrote on his Facebook page. “Don’t make me go against my conscience in order to remove this threat.”

Regev was unmoved by Issa's plea and unperturbed by the resulting media storm. To the contrary, she took it as an opportunity to prove to her constituents that she won't be kowtowing to the “leftist dictatorship” of the Israeli arts. “I support freedom of speech,” she announced, “but the Culture Ministry does not have to channel state funding to groups and organizations that delegitimize the state and support boycotts.”

One can argue with Regev’s approach and agenda, but one cannot ignore that she has a legitimate point. The real problem is a different one and far more serious: She is drunk with power. Regev has not stopped crowing about being on the winning side of the March 17 elections, even as she promises to be “everyone’s” minister of culture.

At the highly charged June 11 meeting with representatives of the arts community, Regev explained in her direct and blunt manner: "We got 30 Knesset seats, you got a total of 20 … We know that the left thinks it owns Israeli culture, [but] we don't need to be confused about who the public is and who [the public] chose. I determine the criteria and can decide … that all the money goes only to the periphery and to Judea and Samaria.”

Regev is right. She does get to determine public-funding criteria, and she said so after getting legal advice. What Regev does not understand is that the elections are behind us, and she is now a government minister. The Likud Party may be in power, but that does not mean she has to humiliate and trample rivals who lost. A bit of statesmanlike behavior and magnanimity by the winning side would not be amiss in her case. Instead, Regev continues with her election campaign, acting as though she were in the throes of primaries fighting for a place on the Likud’s list of Knesset candidates. A proud Likudnik to the end, she's unwilling to take into account those uppity leftists now dependent on her largesse and does not apologize for her patriotism.

Such behavior is far removed from the revisionist Zionist leader Ze’ev Jabotinsky’s ethos of political nobility and integrity and the Likud’s mythologized Prime Minister Menachem Begin, who knew how to be everyone’s leader. Regev, apparently, couldn’t care less. What’s important to her is that in the next elections, she'll be able to present her constituents on the right with an arsenal of examples demonstrating that she acted with determination, humiliated the left and showed those leftist artists who’s the boss. Issa is her first victim; there will surely be others.

Respected veteran actor Shlomo Vishinsky, who participated in the June 11 meeting, described the situation aptly after he emerged: “There’s no way around it; they won and we lost. But we can work together … We depend on her, and I wish her luck.”

Vishinsky is a bereaved father. His son Lior was killed in a 2004 explosion that hit his armored personnel carrier in Rafah, about a year before the 2005 disengagement from Gaza. Regev and her friends on the right do not enjoy any advantage over him in terms of a commitment to Zionism and the state. He sacrificed his first-born son, who had these symbols and values instilled in him at home, for the sake of these very symbols and values. That's why Vishinsky’s words, although something of a capitulation, are actually wise, exposing Regev as a small-time populist politician who shortsightedly believes that from now on she has a monopoly on culture.

It's clear Vishinsky finds the humiliating circumstances painful, but he chose not to confront Regev and to avoid an argument with her about the limits of culture and the meaning of love for the homeland — unlike actor Gavri Banai, who described her as vulgar, after she was named culture minister, enabling her to build additional political capital on the right.

Regev, as she declared in her meeting with the artists and in the media, will withhold funds from anyone who dares delegitimize the State of Israel. She is within her rights, and in certain extreme cases, it's even her duty. The problem with Regev is that she knows no bounds, and delegitimization is a matter of interpretation and not necessarily a measurable concept. It's precisely at this point that artistic freedom of expression could be curtailed.

The same situation applies to Naftali Bennett, chairman of HaBayit HaYehudi and minister of education, who on June 9 ordered that the al-Midan Theater play “A Parallel Time” be removed from the repertoire of publicly funded plays appropriate for schoolchildren. The piece was written and directed by Bashar Murkus and inspired in part by the story of Walid Daka, an Arab Israeli serving a life sentence for his part in the 1984 kidnapping, torture and murder of a soldier named Moshe Tamam.

The play was approved in 2014 by an Education Ministry panel, which found no problematic content as far as children were concerned. Following a protest by the Tamam family, Bennett reconsidered the decision and disqualified the play for reasons of moral standards. “The citizens of Israel will not fund plays that are tolerant toward the murderers of soldiers,” he said.

As expected, Bennett’s decision was hailed and embraced by the right, his electoral base, although the play had recently been approved for the second time by the cultural experts panel. It had initially been approved during the tenure of Bennett’s immediate predecessor, Shai Piron, after it was found to contain no offensive or inciteful elements. For Bennett, however, it was important to make his mark from the start.

As in Regev’s case, if this is the way they plan to operate, there is cause for concern.