Iranian President Hassan Rouhani has been criticized for linking possible help for the country's environmental problems with sanctions relief from a nuclear deal. 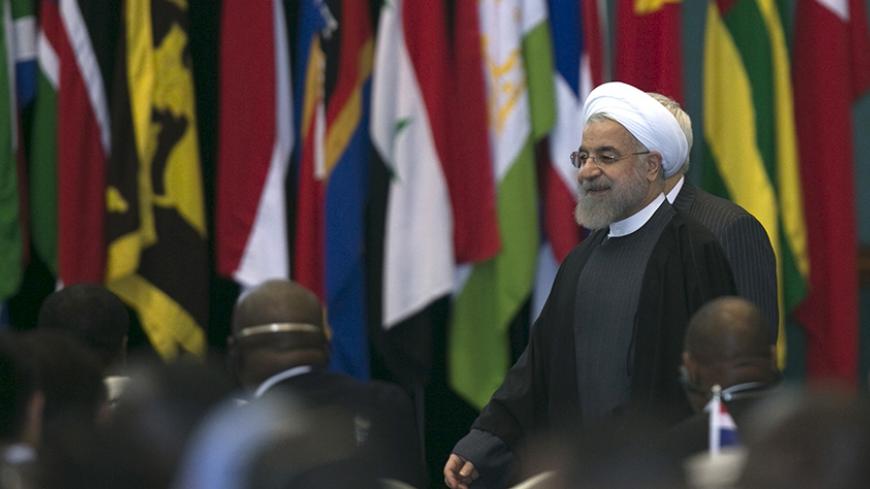 Iranian President Hassan Rouhani has been criticized for suggesting that once a comprehensive nuclear deal is made it will open the door to improving the country’s environmental problems. “The oppressive sanctions must be removed so that investment can come and the problems of the environment, employment, industry and drinkable water are resolved,” Rouhani said at a ceremony on June 7 commemorating Environment Week in Iran.

Rouhani described the sanctions as “a small fever … that at the beginning no attention was paid to this fever, but when the sick person fell ill and was not able to move anymore, we sought a remedy for the illness. Some did not know the reason of the sanctions but step by step, the problems became larger.”

Rouhani added that while “the oppressive sanctions must be removed," this does not mean "that we must submit to the unreasonable wants of others.”

Iran and five permanent members of the UN Security Council plus Germany (P5+1) are working through the final details of a comprehensive deal that would see Iran reduce its nuclear activity in return for sanctions relief, particularly banking sanctions that have hurt the country’s ability to sell its oil and conduct trade and have prevented Western investment in the country.

But Rouhani’s comments linking the country’s various environmental problems and employment woes to the nuclear negotiations and sanctions relief have upset conservatives, who believe the administration is too eager to resolve the dispute and too optimistic about what the deal means for the country.

In an article titled, “The water, wind, soil and forests have also been tied to sanctions,” the conservative Javan newspaper criticized Rouhani’s latest comments. The article said, “Despite experts warning of not connecting domestic issues of the country to the nuclear issue and negotiations, at this ceremony Rouhani once again suggested that with the removal of sanctions not only will investment become fluid in Iran but the issues of the environment, youth employment, water and banking will be [resolved]."

The article continued that Rouhani’s comments “resulted in many experts becoming surprised and a few hours afterward many hostile Western networks and media … took this point and broadcast this to show [that] sanctions have brought Iran to its knees.”

In an article sarcastically titled, “Solving all the problems is tied to the negotiations, even drinking water,” the Kayhan newspaper also criticized Rouhani. Kayhan repeated Javan’s warning that analysts have warned of not tying the nuclear negotiations to domestic issues and cast doubt that so many problems could be resolved with the removal of sanctions. Kayhan wrote, “Stranger than anything else, Rouhani said the removal of sanctions would increase the water levels.”

Kayhan said, “The issue of sanctions is one the most important obstacles for the negotiators because the Americans do not want to remove sanctions, which is a tool to apply pressure on Iran.”

According to his previous statements, Iran's Supreme Leader Ayatollah Ali Khamenei, who has final say on the nuclear program, has warned Iranian officials about being optimistic regarding the sanctions and has emphasized focusing on domestic capabilities instead.

On April 29, he said, “The key to solving economic issues is not in Lausanne, Geneva or New York,” three locations where the Iran and P5+1 nuclear talks have taken place under the Rouhani administration. “Without a doubt, sanctions and pressure cannot stop organized and planned efforts to increase domestic production.”