Interior Ministry officials said that recent hecklers at a Rouhani event were rogue elements, drawing criticism that authorities are unable or unwilling to prosecute the culprits. 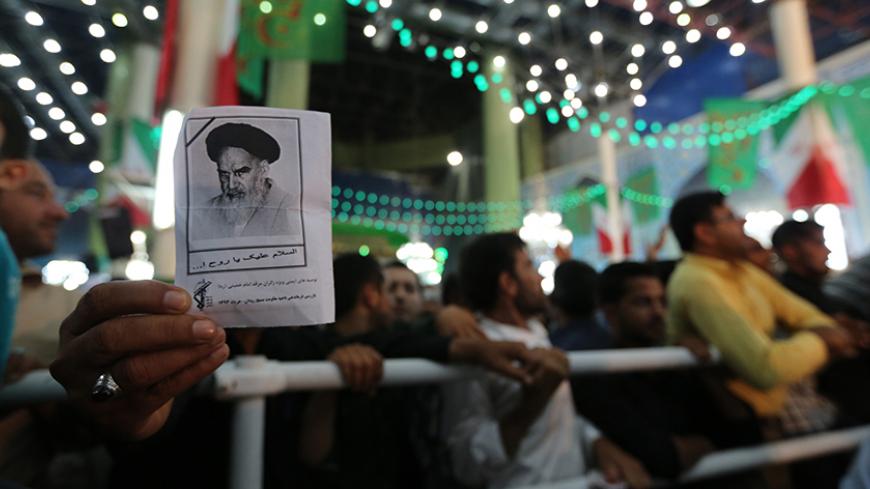 An Iranian man holds a photo of Ayatollah Ruhollah Khomeini while listening to Iranian President Hassan Rouhani deliver a speech on the eve of the 25th anniversary of Khomeini's death at his mausoleum in a suburb of Tehran, June 3, 2014. - Getty Images/Atta Kenare
Arash Karami
@@thekarami
June 24, 2015

When President Hassan Rouhani spoke on June 3 during a commemoration event for Iran's former supreme leader, Ayatollah Ruhollah Khomeini, he was shouted down by a number of hard-line protesters. Three weeks after the event, Iran's Interior Ministry said that the protesters were "rogue" elements and were not connected to any group, drawing criticism from Iranian media, which has become all too familiar with the "rogue" label that typically absolves anyone from being held accountable.

During Rouhani's speech at the newly renovated mausoleum for the founder of the Islamic Republic, hecklers chanted "Death to America" and "Death to hypocrites," forcing Rouhani to momentarily stop his speech. Video clips of Rouhani patiently pausing — even smiling at times — as protesters shouted was shared widely on social media. The incident was criticized by a number of political figures, from the head of Iran's Basij organization, Mohammad Reza Naghdi, to Iranian member of parliament Mohsen Ghorouian. Naghdi criticized the hecklers given that the event was meant to symbolize national unity and shouting down the president sowed division.

At a news conference June 22, the security director for Iran's Interior Ministry, Javad Zarinkollah, said that 11 individuals involved in the heckling were arrested that day by the Islamic Revolutionary Guard Corps, which handles security for Khomeini's mausoleum. He said that they were interrogated and released and that legal cases against them have been opened.

According to Zarinkollah, "These individuals were not organized and were rogue. In our investigations on this issue, we did not reach the conclusion that they were organized by officials or groups."

He criticized the hecklers, saying that Khomeini believed in "unity" and that those chants were in contrast to national unity. "In future years, we will try to prevent these types of events," said Zarinkollah.

Rasoul Montakhebnia wrote an op-ed in Ghanoon newspaper titled, "Rogue elements are not without head" (the title is a play on words in Persian). "This is not the first time that officials, after a bitter and horrible event, make statements that the event took place at the hands of rogue forces," he wrote. Montakhebnia said that if the meaning of "rogue" is that the individuals involved did not receive orders from somewhere or that they were not organized, "this is not acceptable for anyone." It is not possible for people to "incidentally" gather at such a large event in honor of Khomeini, Montakhebnia added.

Montakhebnia said that in recent decades "rogue" groups have disrupted various meetings and insulted officials, yet there has never been a serious attempt to see who is behind these groups. At most, he said, a few people are summoned and are quickly set free.

Also, the writer said that the government, by labeling the protesters "rogue," shows its "weakness" rather than its unity and the strength. "A [political] system … has a constitution, a leader, three branches of government [and] a police force, and if these people cannot identify and stop the activities of a few rogue people, [the system] has a weakness," said Montakhebnia.

He added, "There are people who organize these rogue elements and it is clear who they are." He said that their posts, positions and mosques are well known, and that it is unlikely that Iranian authorities are unaware of this. He asked the president and other officials to confront these groups "at [their] roots" before they continue to spread.