Conservative Iranian parliament member Mehdi Koochakzadeh has taken to Instagram to attack his political rivals, attracting over 2,000 followers in just over a month. 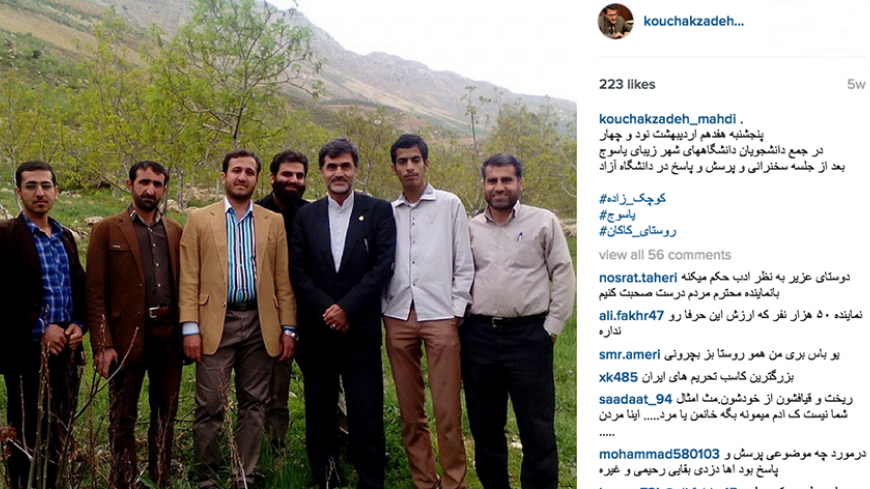 Iranian Foreign Minister Mohammad Javad Zarif attended on May 24 a closed parliament session to speak about the latest rounds of the nuclear negotiations. After his speech, parliament member Mehdi Koochakzadeh approached Zarif at the podium and suggested that Zarif was a “traitor” for negotiating under US threats, something Supreme Leader Ayatollah Ali Khamenei had explicitly warned against. Zarif and Koochakzadeh, surrounded by other parliament members, then engaged in a yelling match, which was recorded by cellphone cameras and shared widely on social media.

Afterward, Koochakzadeh, who has an already acrimonious relationship with the Iranian media, took to his favorite platform to explain his actions: Instagram. He asked, “How long can someone’s real face be hidden from the people? For how long can the administration’s lack of work (especially on the nuclear negotiations) be hidden with distractions and controversy? Has not the time come to lift the curtain on reality and recognize the Iranian people as more honest than Westerners?” He then accused Zarif of starting the yelling match.

Koochakzadeh, a member of the hard-line Endurance Front and supporter of former President Mahmoud Ahmadinejad, is no stranger to controversy. In an August 2014 interview, he said that the majority of Iranian journalists “write lies in return for money.” In 2013, Koochakzadeh called Iranian photographers “pornographers” for taking pictures of parliament members while they were napping during sessions. With these views, it’s no surprise that Koochakzadeh has taken to Instagram to issue statements and engage in debates. Though he has been on the platform for just over a month, his use of it to attack political rivals has caught the attention of Iran's media.

Shargh Daily’s June 10 front page covered the latest Koochakzadeh battle on Instagram, sparked when Marietje Schaake, a member of the European Parliament, visited members of the Iranian parliament on June 7 in a form-fitting outfit with her hair only loosely covered. Her outfit stood in stark contrast to the Iranian female official in full black chador standing next to her.

On his Instagram page, Koochakzadeh wrote that Schaake’s outfit was “appropriate for a party and dancing.” He criticized the head of Iran’s parliament, Ali Larijani, for meeting her, given Larijani’s title and status as the son of an ayatollah and the in-law of the late Ayatollah Morteza Motahhari, one of the main theoreticians of the constitution of the Islamic Republic of Iran.

Parliamentarian Ali Motahhari, the son of Ayatollah Motahhari, responded on Instagram to Koochakzadeh's posts. Motahhari agreed that Schaake’s attire was not appropriate but did not agree that Larijani should have left the meeting. He wrote that Schaake was appropriately dressed at first but did not change back into her full covering after using the restroom. Motahhari also defended his brother-in-law, adding that Larijani is indeed “sensitive to chastity issues; otherwise, he would not have become our [brother-in-law].” Motahhari then suggested in another post that Koochakzadeh’s concerns are partisan rather than religious, writing that it would have been nice if Koochakzadeh had the same sensitivities about hijab when Ahmadinejad was in power.

Koochakzadeh responded to Motahhari in three more Instagram posts. He referred to Schaake as “uncultured” and dismissed Motahhari’s reasons for her change in clothes, writing that Motahhari has mixed up “the truth, lies and buffoonery.” Koochakzadeh went on to write that Motahhari’s real issue is that he has not forgiven him for smacking him upside the head when they were in high school.

Koochakzadeh’s third response to Motahhari has attracted over 300 comments. The parliament member has only 18 posts as of this writing and over 2,000 followers. He follows three accounts: Khamenei_video, Khamenei_ir and emamkhomeini.