Local tourism in Gaza is still dependent on the worsening economic and political situation, which explains the cautious attendance at resorts. 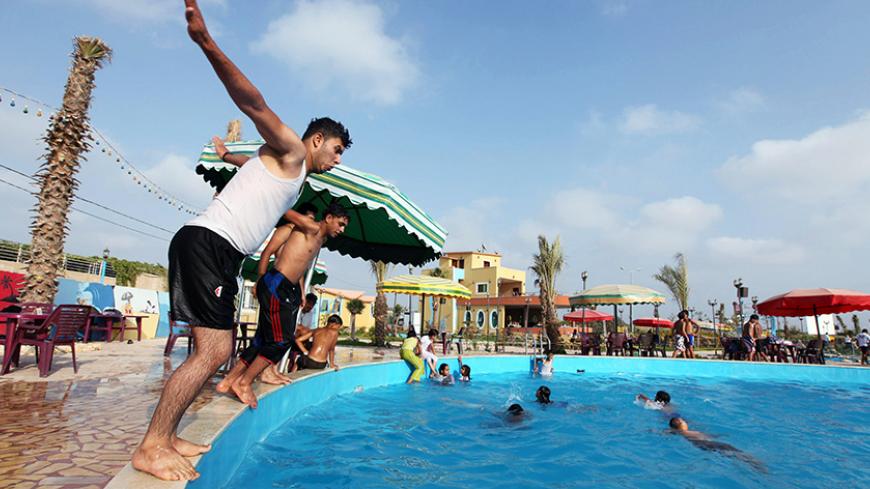 KHAN YUNIS, Gaza Strip — Ibrahim Hamed, 25, and his friends are planning to spend a day at a small private resort in the coastal area of Sheikh Ajlin in Gaza, where resorts are among the entertainment options.

"Demand has become higher on these places. Private entertainment places during summer are limited in Gaza. Recently, we noted high attendance at resorts and it is a great chance for family and friends to gather and for recreation," Hamed, an accountant, told Al-Monitor.

Gaza's public free beaches are considered a retreat for most Gazans — a place where they can relax and have fun.

Despite economic hardships imposed by the Israeli siege that has been in place since the summer of 2006, investors seem to be seeking to invest in resorts in the Gaza Strip. However, it looks like they are treading cautiously. Mohammad Abu Jayyab, the owner and manager of the newly buit Lou'loua (meaning pearl) resort at the Khan Yunis beach, said local tourism has become more popular during summer vacations.

Abu Jayyab told Al-Monitor that the closure of border crossings and travel bans have created domestic investment opportunities. "Many resorts were established in Gaza as the people were unable to take summer vacations outside of the Strip because of the siege. A large part of these opportunities is in Khan Yunis, which has clean beaches but lacked touristic facilities,” he said.

“These projects allow local recruitment. For example, my resort has more than 20 workers, and this [recruitment] is part of the investment [projects’] social responsibility. Local projects improve hiring [opportunities] and decrease unemployment," he added.

Abu Jayyab believes that prior to the latest crises, local tourism projects were much more popular as more than 40,000 employees in Gaza are not receiving their paychecks, border crossings are often closed, the reconstruction process came to a halt and economic crises have brought about a setback for various projects.

"We hope that the situation will improve, crossings will open, and employees will regain their jobs. This will positively affect local tourism. Today, these resorts are the only outlet for the citizens. This is why I am hoping this season would be profitable to us resort owners," Abu Jayyab said.

He said he was not subjected to any bureaucratic governmental impediments in terms of authorization. "We need investment incentives through tax exemptions. Municipalities are strongly focused on taxes and authorization fees."

Rizk Helo, director-general of the local tourism department at the Ministry of Tourism and Antiquity in Gaza, said there were 18 resorts in Gaza in early 2014. During this year, six new resorts opened up.

Despite the many complaints of resort owners, Helo told Al-Monitor that the ministry did all it could to facilitate matters for investors. "We live under real siege. All the ministry can do remains minimal. As such, the ministry has tried during past years to support this sector, especially amid all the damages caused by war. The ministry also provided diesel and gas to ensure the continuity of their work amid electricity cutoff."

Economic expert and economic professor at Al-Azhar University in Gaza, Mouin Rajab, said that in the past years, investors believed that such activity would be lucrative, and as a result, the number of investors in Gaza is increasing.

He told Al-Monitor, "Resort owners are currently making preparations to receive the people. They abide by the conditions imposed by municipalities and health and monitoring bodies. The more they abide by these conditions related to cleanliness and health safety, the greater the attendance, especially that some provide chalets with different services. Add to this the competition among the different resorts."

Rajab says the economic situation of citizens may play an important role in decreasing how many people come. Spending time at resorts requires cutting back other family expenditures and many families cannot do so.

The local tourism industry in Gaza will only improve when the citizens’ economic situation improves. While modest numbers of people do come to these resorts, tourism will remain hostage to the harsh economic and political situation in Gaza.