The decision of Egyptian Prime Minister Ibrahim Mehleb to transfer negligent physicians from hospitals in Cairo governorates to Upper Egypt has raised the ire of the public, which demands hospital reform. 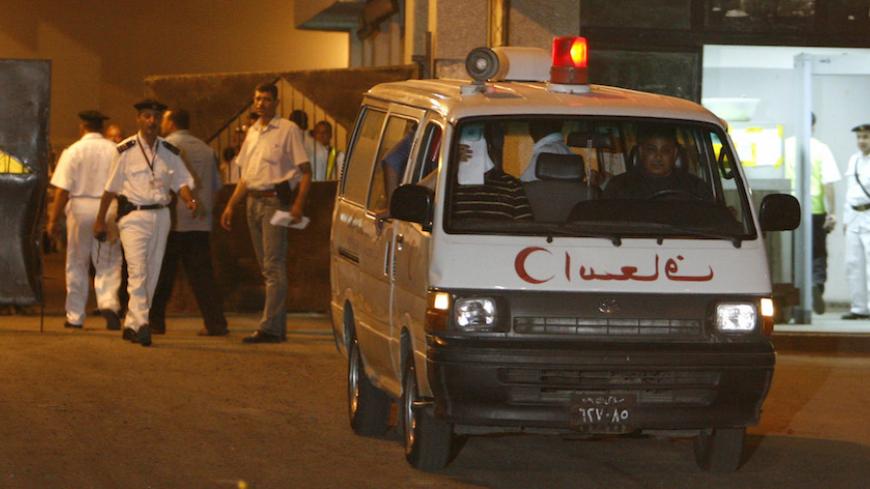 CAIRO — Egyptian Prime Minister Ibrahim Mehleb paid a June 6 visit to the National Heart Institute and Theodor Bilharz Research Institute, both located in Giza governorate. Following the visits, Mehleb transferred a group of physicians from Giza to the Upper Egypt governorates, including Sohag, Qena and Luxor.

Soon after the prime minister's visits, an extensive mobilization campaign erupted on social networking sites. A Facebook page — the name of which translates as “So that he will not be surprised when he visits" — was set up June 7 to shed light on the poor conditions in public hospitals.

Some 48 hours after the page was created, visits to it skyrocketed. A large number of doctors and citizens got involved and uploaded hundreds of pictures of different hospitals, including ones of snakes and owls at the Mattay Central Hospital in El Menia district. Other photos showed goats and sheep at the entrance to a clinic in Mina al-Basal in Alexandria. Roughly 170,000 doctors are participating in the campaign, taking pictures at hospitals and showing them to the public to promote reform for the health care system.

Social media has quickly become a critical tool to publicize the smallest government neglect. The page’s popularity led to the creation of similar pages to show the deteriorating situation in other sectors, such as education, culture, governorate services, electricity, agriculture and sanitation, as well as police practices and living conditions in the slums.

Managerial corruption at hospitals, including surrounding the purchase of heart stents at the National Heart Institute, had been addressed in reports prepared by unknown parties with information provided mainly by the Accountability State Authority, the Administrative Control Authority and the Administrative Prosecution Authority. Following the release of the reports, Mehleb visited the two hospitals in Giza governorate and was shocked by what he saw: overcrowded outpatient clinics, neglect by some physicians and cats wandering the hospital corridors.

Immediately after these visits, Mehleb directed Minister of Health Adel Adawi to dismiss negligent officials from their posts and ordered Minister of Scientific Research Sharif Hamad to dismiss Theodor Bilharz Research Institute (affiliated with the Ministry of Scientific Research and not the Ministry of Health) director Hanan al-Baz from her post. Mehleb also instructed Adawi to prepare a reform plan to be submitted to him within a week of the visit for the National Heart Institute, physicians and others responsible for neglect in hospitals.

On the sidelines of Mehleb’s visit to Giza, Adawi said in a press statement June 6 that the ministry's inspection teams visited these hospitals to check into the infrastructure that provides health care services to patients.

Adawi said that he conducted a global performance assessment of the operating rooms, intensive care units and staff and that negligent physicians and those who met only half of the required standards following evaluation by a committee established by the health minister were transferred to hospitals in El Alamein, Sohag, New Qena, Matrouh and Luxor.

“The dire situation in hospitals is due to the collapse of the health care system, which is the result of years of negligence and corruption," he said. "I can’t resolve this crisis overnight because I have been handling the health care portfolio for only one year.”

Ihab Taher, secretary-general of the Doctors Syndicate, told Al-Monitor that the transferring of doctors by senior officials deceives the Egyptian people. The ministers are reacting to the problems and not resolving the reasons behind them, such as the lack of medical supplies, medicines and medical imaging and analysis equipment — assets that, when available, are insufficiently maintained. There are also old buildings and poor training for nursing staff, as well as negligence by some physicians. Notably, a resident physician’s salary is 80 Egyptian pounds (roughly $10) per month.

Taher added, “I would like to ask Prime Minister Mehleb and Health Minister Adawi, 'Are you punishing the doctors or the patients? If there is really a negligent physician working in the Cairo governorate, will the problem end if he is transferred to Sohag or Upper Egypt? Or are you punishing the patients in Sohag by such measures? Aren’t the people in Upper Egypt human beings?' These transfers are contrary to the civil service law; a physician should be punished in his workplace depending on the mistake he made.”

Taher said he hopes that the government acknowledges the failure of the health care system and develops a five-year plan to reform 20% of the problems each year, starting with the reform of departments that are crucial to patients, such as emergency departments, intensive care units and pediatric departments.

Iffat Kamel, the former director general of nursing at the Ministry of Health and head of Friends of the Egyptian Nurse Association, told Al-Monitor that the poor medical services are caused by several factors, including poor nurse training. Fifteen-year-old students join nursing institutes after they graduate from middle school, and they are often sent to hospitals for training. There, due to the shortage of professional nurses, these young students are often asked to carry out tasks that require specialized medical training.

The state needs to establish nursing colleges to meet the shortfall of well-trained nurses and attract more students to the profession.

Kamel said that despite the severe shortage of nurses in public hospitals, the private sector employs an adequate number and many Egyptian nurses work in the Gulf states. Nurses in the public hospital sector in Egypt are paid low salaries (the base salary of a nurse is 180 Egyptian pounds [$25] per month), do not receive many incentives and face psychological pressures that include mistreatment because the profession is not regarded highly in Egyptian society and many patients' families treat nurses as maids.